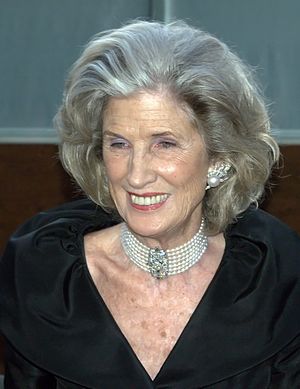 Nancy Kissinger at the Metropolitan Opera opening in 2009.

Nancy Sharon Maginnes Kissinger (born April 13, 1934) is an American philanthropist, and the second wife of former U.S. Secretary of State Henry Kissinger. The couple married on March 31, 1974, in Arlington, Virginia.[1]

Kissinger was born in Manhattan and raised in White Plains, New York. Her parents were Agnes (née McKinley) and Albert Bristol Maginnes, a wealthy lawyer.[2] She received a B.A. in history in 1955 from Mount Holyoke College.

She was a long-time aide to New York Governor Nelson Rockefeller before her marriage, recommended to him in 1964 by her future husband, then a professor at Harvard, where she was a student. Her first job was as Professor Kissinger's researcher on a Rockefeller task force; she continued working for Rockefeller at the Rockefeller Brothers Fund after the task force finished its work.[3] She later became director of international studies for Rockefeller's Commission on Critical Choices for America.[4]