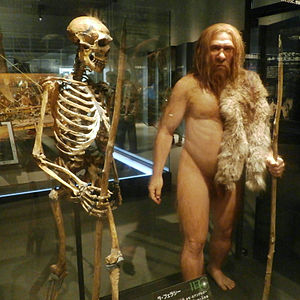 Skeleton and model of a Neanderthal from La Ferrassie

In August 2014, a team reported on a new analysis of 40 sites in Western Europe, concluding that Neanderthals died out about 40,000 years ago.[1] This date, much earlier than previous estimates, was established through improved radio carbon dating methods. Researchers want to expand their survey of sites to Eastern Europe and Siberia, as Neanderthals may have survived longer there.

Hypotheses on the fate of the Neanderthals include a failure or inability to adapt to climate change, competitive exclusion, or extinction by encroaching anatomically modern humans, who arrived in Europe long after Neanderthals had settled there.[2] Neanderthal hybridization with early modern human populations is also considered a viable hypothesis. Some interbreeding took place in western Asia about 50,000 to 60,000 years ago, as evidenced by 1 to 4 percent of the material of genomes carried by non-African people living today.[1]

Coexistence prior to extinction

The new evidence narrows the period in which both Neanderthals and modern humans coexisted in Europe to approximately 5,000 years.[1] The duration of this period is uncertain.[3] There is evidence that modern humans reached Europe sometime between 45,000 and 43,000 years ago.[4] The new evidence, based on conclusions from improved radiocarbon dating indicates that Neanderthals became extinct 40,000 years ago, which overturns older less accurate carbon dating which incorrectly indicated that Neanderthals may have lived as recently as 24,000 years ago in refugia on the south coast of the Iberian peninsula such as Gorham's Cave.[5][6] Inter-stratification of Neanderthal and modern human remains has been suggested,[7] but is disputed.[8]

Jared Diamond has suggested a scenario of violent conflict comparable to the genocides suffered by indigenous peoples in recent human history.[9]

Rapid extinction by parasites and pathogens

Another possibility raised by Diamond and others, paralleling colonialist history, would be a greater susceptibility on the part of the Neanderthals to pathogens introduced by Cro-Magnon man. Diamond argues that asymmetry in susceptibility to pathogens is a consequence of the difference in lifestyle.[9] A pandemic will generally have a limited mortality because the pathogen needs a host in order to spread. If two species are similar and live side by side, then the survival of one species becomes less important for the pathogen, and in the end it may have three outcomes: divergence, exchange of genes, or downfall.

Even a slight competitive advantage on the part of modern humans could account for Neanderthals' replacement by anatomically modern humans on a timescale of 10,000–20,000 years.[10]

The hypothesis that early humans violently replaced Neanderthals was first proposed by French palaeontologist Marcellin Boule (the first person to publish an analysis of a Neanderthal) in 1912.[11]

Another supporter of competitive replacement is Jared Diamond who points out in his book The Third Chimpanzee that the genocidal replacement of Neanderthals by modern humans is similar to modern human patterns of behavior that occur whenever people with advanced technology invade the territory of less advanced people.[12]

In 2006, two anthropologists of the University of Arizona proposed a new explanation for the demise of the Neanderthals.[13] In an article titled "What's a Mother to Do? The Division of Labor among Neanderthals and Modern Humans in Eurasia",[14] they theorize that Neanderthals like Middle paleolithic Homo sapiens did not have a division of labor between the sexes. Under this hypothesis, both male and female Neanderthals participated in the single main occupation of hunting big game that flourished in Europe in the ice age, such as bison, deer, gazelles and wild horses. This hypothesis proposes that the Neanderthal's relative lack of labor division resulted in their poor extraction of resources from the environment — as compared to Homo sapiens — and contributed to their demise.

Researchers including Karen L. Steudel of the University of Wisconsin have proposed that because Neanderthals had limbs that were shorter and stockier[citation needed] than those of modern humans, and because of other anatomical differences in their limbs, the primary reason the Neanderthals were not able to survive is related to the fact that they could not run as fast as modern humans, and they would require 30% more energy than modern humans would for running or walking.[15][not in citation given]

Nevertheless, in the recent study, researchers Martin Hora and Vladimir Sladek of Charles University in Prague show that Neanderthal lower limb configuration, particularly the combination of robust knees, long heels and short lower limbs, increased the effective mechanical advantage of Neanderthal knee and ankle extensors, thus reducing the force needed and the energy spent for locomotion significantly. The walking cost of the Neanderthal male is now estimated to be 8–12% higher than that of anatomically modern humans, whereas the walking cost of the Neanderthal female is considered to be virtually equal to that of anatomically modern females.[16]

Other researchers, like Yoel Rak, from Tel-Aviv University in Israel, have noted that the fossil records show that Neanderthal pelvises in comparison to modern human pelvises would have made it much harder for Neanderthals to absorb shock and to bounce off from one step to the next, giving modern humans another advantage over Neanderthals in running and walking ability.[17]

Pat Shipman, from Pennsylvania State University in the United States, argues that the domestication of the dog gave modern humans an advantage when hunting.[18] The oldest remains of domesticated dogs were found in Belgium (31,700 BP) and in Siberia (33,000 BP).[19][20] A survey of early sites of modern humans and Neanderthals with faunal remains across Spain, Portugal and France provided an overview of what modern humans and Neanderthals ate.[21] Rabbit became more frequent, while large mammals - mainly eaten by the Neanderthals - became increasingly rare. In 2013, DNA testing on the "Altai dog", a paleolithic dog's remains from the Razboinichya Cave (Altai Mountains), has linked this 33,000-year-old dog with the present lineage of Canis lupus familiaris.[22]

An alternative to extinction is that Neanderthals were absorbed into the Cro-Magnon population by interbreeding. This would be counter to strict versions of the Recent African Origin, since it would imply that at least part of the genome of Europeans would descend from Neanderthals, who left Africa at least 350,000 years ago.

The most vocal proponent of the hybridization hypothesis is Erik Trinkaus of Washington University.[23][24] Trinkaus claims various fossils as hybrid individuals, including the "child of Lagar Velho", a skeleton found at Lagar Velho in Portugal.[25] In a 2006 publication co-authored by Trinkaus, the fossils found in 1952 in the cave of Pestera Muierii, Romania, are likewise claimed as hybrids.[26]

Genetic studies indicate some form of hybridization between archaic humans and modern humans had taken place after modern humans emerged from Africa. An estimated 1 to 4 percent of the DNA in Europeans and Asians (e.g. French, Chinese and Papua probands) is non-modern, and shared with ancient Neanderthal DNA rather than with sub-Saharan Africans (e.g. Yoruba and San probands).[27]

Modern-human findings in Abrigo do Lagar Velho, Portugal, allegedly featuring Neanderthal admixtures, have been published.[28] However, the interpretation of the Portuguese specimen is disputed.[29]

Jordan, in his work Neanderthal, points out that without some interbreeding, certain features on some "modern" skulls of Eastern European Cro-Magnon heritage are hard to explain. In another study, researchers have recently found in Peştera Muierilor, Romania, remains of European humans from 30 thousand years ago who possessed mostly diagnostic "modern" anatomical features, but also had distinct Neanderthal features not present in ancestral modern humans in Africa, including a large bulge at the back of the skull, a more prominent projection around the elbow joint, and a narrow socket at the shoulder joint. Analysis of one skeleton's shoulder showed these humans, like Neanderthals, did not have the full capability for throwing spears.[30]

An analysis of a first draft of the Neanderthal genome by Richard E. Green et al. from Max Planck Institute for Evolutionary Anthropology in Leipzig, Germany released in May 2010 indicates interbreeding may have occurred.[31][32] "Those of us who live outside Africa carry a little Neanderthal DNA in us," said Svante Pääbo, who led the study. "The proportion of Neanderthal-inherited genetic material is about 1 to 4 percent. It is a small but very real proportion of ancestry in non-Africans today," says Dr. David Reich of Harvard Medical School in Boston, who worked on the study. This research compared the genome of the Neanderthals to five modern humans from China, France, sub-Saharan Africa, and Papua New Guinea. The finding is that about 1 to 4 percent of the genes of the non-Africans came from Neanderthals, compared to the baseline defined by the two Africans. This indicates a gene flow from Neanderthals to modern humans, i.e., interbreeding between the two populations. Since the three non-African genomes show a similar proportion of Neanderthal sequences, the interbreeding must have occurred early in the migration of modern humans out of Africa, perhaps in the Middle East. No evidence for gene flow in the direction from modern humans to Neanderthals was found. The latter result would not be unexpected if contact occurred between a small colonizing population of modern humans and a much larger resident population of Neanderthals. A very limited amount of interbreeding could explain the findings, if it occurred early enough in the colonization process.[31]

While interbreeding is viewed as the most parsimonious interpretation of the genetic discoveries, the authors point out they cannot conclusively rule out an alternative scenario, in which the source population of non-African modern humans was already more closely related to Neanderthals than other Africans were, due to ancient genetic divisions within Africa.[31]

Among the genes shown to differ between present-day humans and Neanderthals were RPTN, SPAG17, CAN15, TTF1 and PCD16.[31]

Although it is believed that Neanderthals had clothing,[36] it has been proposed that failure to adapt their hunting methods caused their extinction when Europe changed into a sparsely vegetated steppe and semi-desert during the last Ice Age.[37] Requiring more energy to move and hunt than their early modern human counterparts, Neanderthals would have been more susceptible to less food being available as a result of climate change.[citation needed] A string of major volcanic eruptions 40,000 years BP (including Campi Flegrei), affecting the region between Italy and the Caucasus Mountains, may have contributed to the Neanderthals' decline by reducing their food supply.[38] Studies of sediment layers at Mezmaiskaya Cave suggest a severe reduction of plant pollen.[38] The damage to plant life would have led to a corresponding decline in plant-eating mammals hunted by the Neanderthals.[38][39]