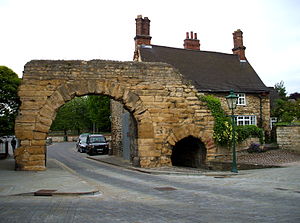 Newport Arch from the south.

Newport Arch is the name given to the remains of a 3rd-century Roman gate in the city of Lincoln, Lincolnshire.[1] It is reputedly the oldest arch in the United Kingdom still used by traffic.

File:Newport Arch, late 19th century.jpg
Newport Arch in the second half of the 19th century. A brick building touched the west side of the arch. It was later razed and replaced with one standing further away, allowing for a pavement

The arch was remodelled and enlarged when the city, then Lindum Colonia a Roman town, became capital of the province Flavia Caesariensis in the 4th century. It is one of many original Roman arches still open to traffic, other examples being two gates through the city walls of the Roman town of Diocletianopolis (now Hisarya, Bulgaria), as well as numerous examples in Turkey.

As the north gate of the city, it carried the major Roman road Ermine Street northward almost in a straight line to the Humber. 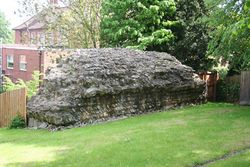 From Romano-British Buildings and Earthworks by John Ward (1911):

"A considerable portion of the north gate of Lincoln — the Newport Arch — is standing, but is buried to the extent of about 8 ft (2.4 m). in the soil and débris accumulated since Roman times. The structure is about 34 ft (10 m). deep and has a single passage for the road, 17½ ft. wide. The inner or back portal of this passage is still intact, and is nearly 16 ft (4.9 m). in the clear and rises to a height of about 22½ ft. above the Roman level. Its arch is of a single ring of large limestone voussoirs rising from imposts which appear to have been moulded. The outer or front arch has long since disappeared. On the east side is a postern for pedestrians, 7 ft (2.1 m). wide and contracting to about 5 ft (1.5 m). at the north end, and 15 ft (4.6 m). high from the Roman level. On the west side there was a similar postern about a century ago. The whole structure is of good masonry, and it appears to have projected considerably beyond the north face of the town wall."

In 1964 a goods lorry struck the arch while attempting to pass under it. The driver's name was Robert Halloran from Winterton in Lincolnshire.

Forty years later, in May 2004, another lorry struck the arch, causing minor damage.[2]