From Infogalactic: the planetary knowledge core
Jump to: navigation, search
This article is about the Norwegian municipality. For other uses, see Odda (disambiguation).

In 1927, Erling Johnson, working at Odda Smelteverk, invented a process to produce three-component, NPK fertilizers. This process is now known as the Odda process. 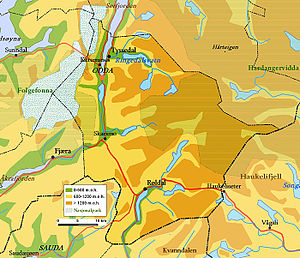 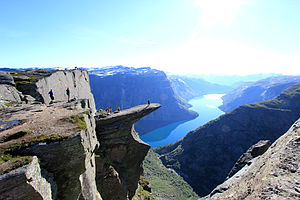 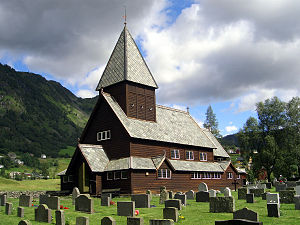 The municipality (originally the parish) is named after the old "Odda" farm (Old Norse: Oddi), since the first Odda Church was built there. The name is identical with the word oddi which means "headland".[3]

The coat-of-arms is from modern times; they were granted on 8 October 1982. The arms show a canting of an arrowhead (Norwegian language: pilodd). The name of the municipality, however, is not derived from the word for arrowhead.[4]

The Church of Norway has four parishes (sokn) within the municipality of Odda. It is part of the Hardanger og Voss deanery in the Diocese of Bjørgvin. 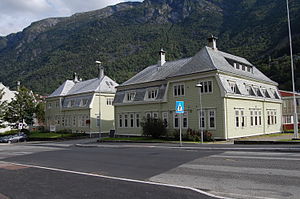 The Røldal Stave Church was built in the years 1200–1250 in the present-day village of Røldal. This is one of the oldest structures in the municipality.

During the 19th century, Odda became a significant tourist destination. Visits ranged from English pioneers around 1830 to the German Emperor Kaiser Wilhelm II, who visited Odda every year between 1891 and 1914. This led to the construction of several hotels in the municipality.

The present Odda municipality is centred on a modern town which grew up around smelters built at the head of the Sørfjorden branch of the Hardangerfjord in the mid-twentieth century, drawing migrants from different parts of Norway.

The carbide production and the subsequent production of cyanamide was started in 1908 after the water power plant was operational and provided the necessary electricity for the arc furnaces. The plant was the largest in the world and remained operational till 2003 shortly after the plant was sold to Philipp Brothers Chemicals Inc. The Norwegian government tried to get the site recognized together with other industrial plants as a UNESCO World Heritage Site.[5][6][7] In 2010 an international report stated: What makes Odda smelteverk so important and central to the application of Norway’s hydro power sites and pioneer chemical industry as a World Heritage Site is the fact that here in an internationally unique way the physical remains of an early chemical production process are still present.[8]

Odda grew up around this smelter in the early-twentieth century, drawing migrants from different parts of Norway. As a result, there developed a new dialect, a mixture of that spoken in the home regions of the migrants - a phenomenon termed by linguists "a Koiné language". The town of Odda and neighboring village of Tyssedal - which arose in the same time and socio-economic circumstances as those of Odda - provided valuable insights to linguists studying this phenomenon. The researcher Paul Kerswill conducted an intensive study of the Norwegian spoken in the two communities, relating them to very different geographical origins: The workers in Odda came predominantly (86%) from western Norway. In Tyssedal only about one third came from western Norway; one third came from eastern Norway; and the rest from other parts of the country. The dialects that evolved in these two communities were radically different from each other, though spoken at a short geographical distance from each other. 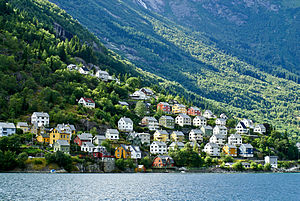 View of some houses in Odda 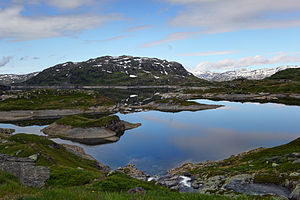 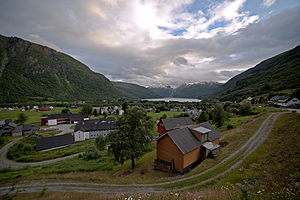 View of the village of Røldal

All municipalities in Norway, including Odda, are responsible for primary education (through 10th grade), outpatient health services, senior citizen services, unemployment and other social services, zoning, economic development, and municipal roads. The municipality is governed by a municipal council of elected representatives, which in turn elect a mayor.

The municipal council (Kommunestyre) of Odda is made up of 27 representatives that are elected to every four years. For 2011–2015, the party breakdown is as follows:[9]

Odda municipality is very mountainous and the settlements are all located in valleys. Because of the many mountains, there are many large waterfalls including Låtefossen, Espelandsfossen, and Tyssestrengene. There are also many large lakes such as Sandvinvatnet, Votna, Valldalsvatnet, Røldalsvatnet, Ringedalsvatnet, Langavatnet, and parts of Ståvatn. On top of the high mountains in western Odda is the vast Folgefonna glacier, including the Buarbreen glacier near the town of Odda. Part of Folgefonna National Park is in Odda. The western part of the municipality sits on top of the southern part of the Hardangervidda plateau, which also includes part of the Hardangervidda National Park. The mountains Kistenuten and Sandfloegga are located on the plateau.

The municipality sits at a crossroads of two major roads. The European route E134 highway runs east-west through Odda municipality, cutting through many mountains in the Røldal Tunnel, Horda Tunnel, Austmannali Tunnel, and Haukeli Tunnel. The other main road is the Norwegian National Road 13 which runs north-south through the municipality. The two roads run together from Seljestad to Håra. At Eitrheim, the Folgefonna Tunnel connects Odda to the neighboring area of Mauranger in Kvinnherad municipality, cutting through the mountains under the Folgefonna glacier.