During the early years of the new Mexican republic, there was widespread civil disorder as factions competed for control. In 1828, President Guadalupe Victoria ejected Lorenzo de Zavala from the office of governor of the state of México. Zavala, supported by Antonio López de Santa Anna, rallied most of the garrison in Mexico City (then a part of México state) to his aid. Four days of fighting in Mexico City resulted in Zavala's winning and installing a new president, Vicente Guerrero.

The fighting in the streets destroyed a great deal of personal property of residents. Average citizens had little recourse for damages suffered. They had no consuls, or representatives to speak on their behalf. Foreigners whose property was damaged or destroyed by rioters or bandits were usually unable to obtain compensation from the government. They began to appeal to their own governments for help and compensation, as they were often international traders. Despite repeated claims from French nationals in the city, the French government let the matter subside. 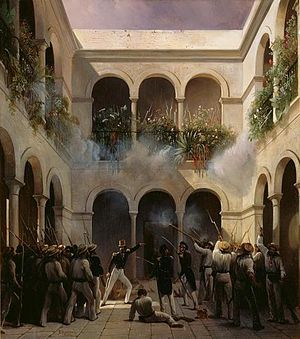 In 1838 a French pastry cook, Remontel, claimed that his shop in the Tacubaya district of Mexico City had been ruined by looting Mexican officers in 1828. He appealed to France's King Louis-Philippe. Coming to a national's aid, France demanded 600,000 pesos in damages, an enormous sum for the time, when the typical daily wage in Mexico City was about one peso (8 Mexican reals). More importantly, the government of Mexico had defaulted on millions of dollars' worth of loans from France. Diplomat Baron Antoine Louis Deffaudis gave Mexico an ultimatum to pay, or the French would demand satisfaction.

When president Anastasio Bustamante made no payment, the king of France ordered a fleet under Rear Admiral Charles Baudin to declare and carry out a blockade of all Mexican ports from Yucatán to the Rio Grande, to bombard the Mexican fortress of San Juan de Ulúa, and to seize the city of Veracruz, which was the most important port on the Gulf coast. French forces captured virtually the entire Mexican Navy at Veracruz by December 1838[citation needed]. Mexico declared war on France.

With trade cut off, the Mexicans began smuggling imports via Corpus Christi, Republic of Texas, and into Mexico. Fearing that France would blockade the Republic's ports as well, a battalion of Texan forces began patrolling Corpus Christi Bay to stop Mexican smugglers. One smuggling party abandoned their cargo of about a hundred barrels of flour on the beach at the mouth of the bay, thus giving Flour Bluff its name. The United States, ever watchful of its relations with Mexico, sent the schooner Woodbury to help the French in their blockade.

Meanwhile, acting without explicit government authority, Antonio López de Santa Anna, known for his military leadership, came out of retirement from his hacienda near Xalapa and surveyed the defenses of Veracruz. He offered his services to the government, which ordered him to fight the French by any means necessary. He led Mexican forces against the French. In a skirmish with the rear guard of the French, Santa Anna was wounded in the leg by French grapeshot. His leg was amputated, and buried with full military honors.[1] Exploiting his wounds with eloquent propaganda, Santa Anna catapulted back to power.

With the diplomatic intervention of the United Kingdom, eventually President Bustamante agreed to pay the 600,000 pesos for the baker's damages, and the French forces withdrew on 9 March 1839.