From Infogalactic: the planetary knowledge core
Jump to: navigation, search
This article is about the American civic holiday. For the Quebec holiday, see National Patriots' Day. For the anniversary of September 11, 2001, see Patriot Day. For the motion picture about the Boston Marathon bombing, see Patriots Day (film). 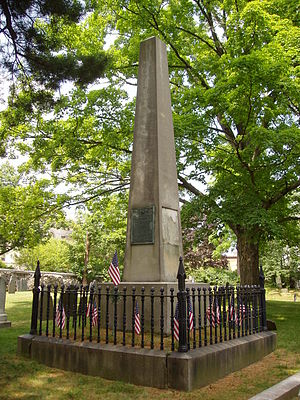 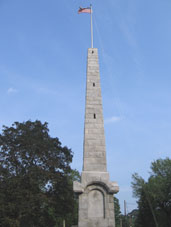 Since 1969, it has been observed on the third Monday in April in Massachusetts[2] and in Maine,[3] (which until 1820 was part of Massachusetts). The Monday holiday creates a three-day long weekend. It is also the first day of a vacation week for public schools in both states and a school holiday for many local colleges and universities, both public and private.

The day is a public school observance day in Wisconsin.[4] Florida law also encourages people to celebrate it, though it is not treated as a public holiday.[5]

Observances and re-enactments of the battles occur annually at Lexington Green in Lexington, Massachusetts (around 6:00 am) and the Old North Bridge in Concord, Massachusetts (around 9:00 am). In the morning, mounted re-enactors with state police escorts retrace the Midnight Rides of Paul Revere and William Dawes, calling out warnings the whole way.

The biggest celebration of Patriots' Day is the Boston Marathon, which has been run every Patriots' Day since April 19, 1897 to mark the then-recently established holiday, with the race linking the Athenian and American struggles for liberty[6] (marathons being so named after the Greek Battle of Marathon).

Patriots' Day was first proclaimed in Massachusetts in 1894 by Gov. Frederic T. Greenhalge replacing Fast Day as a public holiday.[1] It was established on April 19, commemorating the date of the Battles of Lexington and Concord in 1775, and consolidating the longstanding municipal observances of Lexington Day and Concord Day. It also marked the first bloodshed of the American Civil War in the Baltimore riot of 1861, during which four members of the Massachusetts militia were slain and 36 injured. The dual commemoration, Greenhalge explained, celebrated "the anniversary of the birth of liberty and union." In 1938, with the generation that had fought in the Civil War largely off the voter rolls, the Massachusetts legislature passed a bill establishing the holiday "in commemoration of the opening events of the War of the Revolution."[6]

Maine followed Massachusetts in 1907 and replaced its Fast Day with Patriot's Day.[1]

The Boston Marathon is run on Patriots' Day every year.[6] Therefore sometimes the holiday is referred to as "Marathon Monday".[7]

The Boston Red Sox have been scheduled to play at home in Fenway Park on Patriots' Day every year since 1959. The games were postponed due to weather in 1959, 1961, 1965, 1967, and 1984, and canceled in 1995[8] because of the late start to the season. Since 1968 the games have started early, in the morning, around 11:00 am. The early start to these games usually resulted in the game ending just as the marathon is heading through Kenmore Square. However, since 2007 the marathon has started between 9:30 am and 10:00 am, resulting in the racers going through Kenmore towards the middle of the Red Sox game.[9]