The Penlee lifeboat disaster occurred on 19 December 1981 off the coast of Cornwall. The Penlee Lifeboat Solomon Browne went to the aid of the coaster Union Star after its engines failed in heavy seas. After the lifeboat had rescued four people, both vessels were lost with all hands; in all, sixteen people died including eight volunteer lifeboatmen.

The MV Union Star was launched in Ringkøbing in Denmark just a few days before it was wrecked on the Cornish coast. A mini-bulk carrier registered in Dublin, Ireland, it sailed to IJmuiden in the Netherlands to collect a cargo of fertiliser for its maiden voyage to Arklow in Ireland.[1]

It carried a crew of five: Captain Henry Morton;[2] Mate James Whittaker, Engineer George Sedgwick, Crewman Anghostino Verressimo, and Crewman Manuel Lopes.[3] Also on board was the captain's family who had been picked up at an unauthorised stop on the east coast of England:[2] his wife Dawn and teenage stepdaughters Sharon and Deanne.[3]

Near the south coast of Cornwall, 8 miles (13 km) east of the Wolf Rock, the new ship's engines failed.[1] It was unable to restart them but did not make a mayday call.[2] Assistance was offered by a tug, the Noord Holland, under the Lloyd's Open Form salvage contract but Morton initially refused the offer, later accepting after consulting his owners.[4]

As the ship was close to shore, the Coastguard at Falmouth summoned a Royal Navy Sea King helicopter from 820 Naval Air Squadron (who were providing cover for 771 Naval Air Squadron), RNAS Culdrose. It used the call sign "Rescue 80" during the mission.

The aircraft (airframe XZ574) was flown that night by United States Navy exchange-pilot Lt Cdr Russell Smith, assisted by Lt Steve Marlow, S/Lt Kenneth Doherty and Leading Aircrewman Martin Kennie of the Royal Navy.[6] They were unable to winch anyone off the ship as the waves were too violent.[2][7]

The Coastguard had difficulties contacting the secretary of the nearest lifeboat, Penlee Lifeboat Station at Mousehole on the west side of the bay. They eventually contacted Coxswain Trevelyan Richards and asked him to put the lifeboat on standby in case the helicopter rescue failed. He summoned the lifeboat's volunteer crew and picked seven men to accompany him in the lifeboat.[2] They were Second Coxswain/Mechanic Stephen Madron, Assistant Mechanic Nigel Brockman, Emergency Mechanic John Blewett, and crewmembers Charlie Greenhaugh, Kevin Smith, Barrie Torrie and Gary Wallis.[8] Neil Brockman, the son of Nigel Brockman, got to the lifeboat station on time, but was turned down for the trip by Trevelyan Richards, who was reluctant to take out two members of the same family that night.[8]

The lifeboat launched at 8:12 pm and headed out through the storm to the drifting coaster.[1] The lifeboat was the Solomon Browne, a wooden 47-foot (14 m) Watson-class boat built in 1960[9] and capable of 9 knots (17 km/h).[2] After it had made several attempts to get alongside, four people managed to jump across;[7] the captain's family and one of the men were apparently safe. The lifeboat radioed that 'we’ve got four off', but that was the last heard from either vessel.[2]

Lt Cdr Smith USN, the pilot of the rescue helicopter, later reported that:[10]

The greatest act of courage that I have ever seen, and am ever likely to see, was the penultimate courage and dedication shown by the Penlee [crew] when it manoeuvred back alongside the casualty in over 60 ft breakers and rescued four people shortly after the Penlee had been bashed on top of the casualty's hatch covers. They were truly the bravest eight men I've ever seen, who were also totally dedicated to upholding the highest standards of the RNLI.

Lifeboats were summoned from Sennen Cove, The Lizard and St Mary's to try to help their colleagues from Penlee. The Sennen Cove Lifeboat found it impossible to make headway round Land's End. The Lizard Lifeboat found a serious hole in its hull when it finally returned to its slipway after a fruitless search. Wreckage from the Solomon Browne was found along the shore, and the Union Star lay capsized onto the rocks west of Tater Du Lighthouse. Some, but not all, of the 16 bodies were eventually recovered.[2]

The inquiry into the disaster determined that the loss of the Union Star and its crew was because of:[2]

The loss of the Solomon Browne was:

in consequence of the persistent and heroic endeavours by the coxswain and his crew to save the lives of all from the Union Star. Such heroism enhances the highest traditions of the Royal National Lifeboat Institution in whose service they gave their lives. 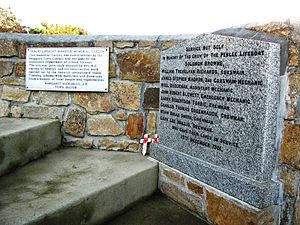 The memorial at Penlee

Coxswain Trevelyan Richards was posthumously awarded the Royal National Lifeboat Institution's gold medal, while the remainder of the crew were all posthumously awarded bronze medals. The station itself was awarded a gold medal service plaque.[10] The disaster prompted a massive public appeal for the benefit of the village of Mousehole which raised over £3 million (equivalent to £NaN in 2015),[11] although there was an outcry when the government tried to tax the donations.[2]

Two nights before the disaster, Charlie Greenhaugh had turned on the Christmas lights in Mousehole. After the storm the lights were left off but three days later his widow, Mary, asked for them to be repaired and lit again.[2] The village has been lit up each December since then, but on the anniversary of the disaster they are turned off at 8:00 pm for an hour as an act of remembrance.[7]

Within a day of the disaster enough people from Mousehole had volunteered to form a new lifeboat crew.[2] In 1983 a new lifeboat station (still known as 'Penlee') was opened nearby at Newlyn where a faster, larger boat could be kept moored afloat in the harbour. Neil Brockman later became the coxswain of the station's Severn-class lifeboat.[8] The old boathouse at Penlee Point with its slipway is empty but has been maintained and a memorial garden was created beside it in 1985 to commemorate the crew of the Solomon Browne.[11]

The Sea King helicopter involved in the rescue attempt, Airframe XZ574, is today preserved at the Fleet Air Arm Museum at RNAS Yeovilton, mainly due to its being flown during the Falklands War conflict by Prince Andrew, Duke of York.[6]

The disaster has been the subject of several songs. Seth Lakeman, an English folk singer and songwriter, wrote a song called "Solomon Browne" about the Penlee lifeboat disaster.[7] This appears on his 2008 album 'Poor Man's Heaven'. The CD reissue of the Anthony Phillips' album Invisible Men includes "The Ballad of Penlee" about the incident. Paul Sirman, a Kentish folk artist who specialises in songs of the sea recorded the incident in his song "Solomon Browne" which appears on his album "One For All". Kimber's Men, a sea shanty group, recorded "Don't Take The Heroes" on their CD of the same name. The song was written by Neil Kimber and Rodger Hepworth.[citation needed]. Local band Bates Motel based in Hayle included a song "The Last Wave", about the disaster on their album Anora.[12]