Phase in sinusoidal functions or in waves has two different, but closely related, meanings. One is the initial angle of a sinusoidal function at its origin and is sometimes called phase offset or phase difference. Another usage is the fraction of the wave cycle that has elapsed relative to the origin.[1]

The phase of an oscillation or wave refers to a sinusoidal function such as the following:

are constant parameters called the amplitude, frequency, and phase of the sinusoid. These functions are periodic with period

, and they are identical except for a displacement of

axis. The term phase can refer to several different things: 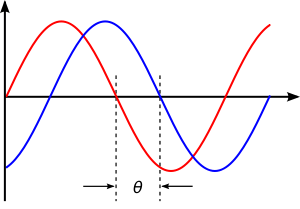 Illustration of phase shift. The horizontal axis represents an angle (phase) that is increasing with time.

Phase shift is any change that occurs in the phase of one quantity, or in the phase difference between two or more quantities.[1]

is sometimes referred to as a phase shift or phase offset, because it represents a "shift" from zero phase.

For infinitely long sinusoids, a change in

is the same as a shift in time, such as a time delay. If

is delayed (time-shifted) by

of its cycle, it becomes:

whose "phase" is now

. It has been shifted by

File:Sine waves same phase.svg
In-phase waves
File:Sine waves different phase.svg
Out-of-phase waves
File:Phase-shift illustration.png
Left: the real part of a plane wave moving from top to bottom. Right: the same wave after a central section underwent a phase shift, for example, by passing through a glass of different thickness than the other parts. (The illustration on the right ignores the effect of diffraction, which would make the waveform continuous away from material interfaces and would add increasing distortions with distance.).

The amount by which such oscillators are out of phase with each other can be expressed in degrees from 0° to 360°, or in radians from 0 to 2π. If the phase difference is 180 degrees (π radians), then the two oscillators are said to be in antiphase. If two interacting waves meet at a point where they are in antiphase, then destructive interference will occur. It is common for waves of electromagnetic (light, RF), acoustic (sound) or other energy to become superposed in their transmission medium. When that happens, the phase difference determines whether they reinforce or weaken each other. Complete cancellation is possible for waves with equal amplitudes.