In South Africa, potjiekos /ˈpɔɪkiːkɒs/, literally translated "small pot food", is a stew prepared outdoors. It is traditionally cooked in a round, cast iron, three-legged pot, the potjie, descended from the Dutch oven brought from the Netherlands to South Africa in the 17th century and found in the homes and villages of people throughout southern Africa.[1] The pot is heated using small amounts of wood or charcoal or, if fuel is scarce, twisted grass or even dried animal dung.

Traditionally, the recipe includes meat, vegetables like carrots, cabbage, cauliflower or pumpkin, starches like rice or potatoes, all slow-cooked with Dutch-Malay spices, the distinctive spicing of South Africa's early culinary melting pot. Other common ingredients include fruits and flour-based products like pasta.

Potjiekos originated with the Voortrekkers, evolving as a stew made of venison and vegetables (if available), cooked in the potjie. As trekkers (pioneers) shot wild game, it was added to the pot. The large bones were included to thicken the stew. Each day when the wagons stopped, the pot was placed over a fire to simmer. New bones replaced old and fresh meat replaced meat eaten. Game included venison, poultry such as guinea fowl, warthog, bushpig, rabbit and hare. 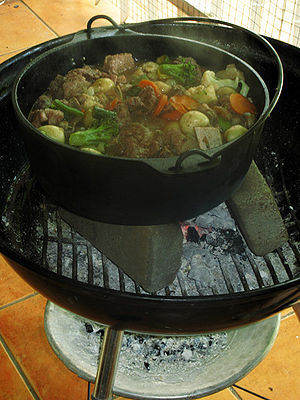 The potjie, with a bit of cooking oil inside, is placed on a fire until the oil has been sufficiently heated. Meat is added first, depending on the preference of the cook. This can be anything from lamb or pork to biltong. The meat is spiced and often a form of alcohol is added for flavour - mostly beer, Old Brown Sherry or a dessert wine like Humbro.[2]

When the meat is lightly browned, vegetables like potatoes and mealies (Corn) are added, along with whatever spices are needed. Water or other liquids may or may not then be added, depending on the views of the potjie chef. The lid is then closed and the contents left to simmer slowly without stirring. This distinguishes a potjiekos from a stew that is stirred. The aim is that the flavours of the different ingredients mix as little as possible. Although some chefs may permit stirring from time to time (which is highly frowned upon), it does create a stew where all the ingredients tend to taste similar. Little sauce or water is used, so that cooking is by steam and not boiling in a sauce like a stew; thus the heat must be very low and constant. These are some of the secrets of each cook. A potjie is a social activity, with guests generally engaging in fireside chitchat while the potjie cooks, typically three to six hours.

A potjie is usually accompanied by rice, pasta or something similar.[citation needed]