From Infogalactic: the planetary knowledge core
Jump to: navigation, search
This article is about a sector of the health care system. For the approach to providing universal health care, see Primary health care. 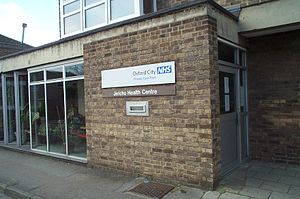 Primary care may be provided in community health centres.

The World Health Organization attributes the provision of essential primary care as an integral component of an inclusive primary healthcare strategy. Primary care involves the widest scope of healthcare, including all ages of patients, patients of all socioeconomic and geographic origins, patients seeking to maintain optimal health, and patients with all manner of acute and chronic physical, mental and social health issues, including multiple chronic diseases. Consequently, a primary care practitioner must possess a wide breadth of knowledge in many areas. Continuity is a key characteristic of primary care, as patients usually prefer to consult the same practitioner for routine check-ups and preventive care, health education, and every time they require an initial consultation about a new health problem. Collaboration among providers is a desirable characteristic of primary care.

The International Classification of Primary Care (ICPC) is a standardized tool for understanding and analyzing information on interventions in primary care by the reason for the patient visit.[4] Common chronic illnesses usually treated in primary care may include, for example: hypertension, angina, diabetes, asthma, COPD, depression and anxiety, back pain, arthritis or thyroid dysfunction. Primary care also includes many basic maternal and child health care services, such as family planning services and vaccinations.

In context of global population ageing, with increasing numbers of older adults at greater risk of chonic non-communicable diseases, rapidly increasing demand for primary care services is expected around the world, in both developed and developing countries.[5][6]

In the United Kingdom, patients can access primary care services through their local general practice, community pharmacy, optometrist, dental surgery and community hearing care providers. Services are generally provided free-of-charge through the National Health Service. In the UK, unlike many other countries, patients do not normally have direct access to hospital consultants and the GP controls access to secondary care.[7] 599 GP practices closed between 2010-11 and 2014-15, while 91 opened and average practice list size increased from 6,610 to 7,171.[8]

In Canada, access to primary and other healthcare services are guaranteed for all citizens through the Canada Health Act.

In Nigeria, healthcare is a concurrent responsibility of three tiers of government. Local governments focus on the delivery of primary care (e.g. through a system of dispensaries), state governments manage the various general hospitals (secondary care), while the federal government's role is mostly limited to coordinating the affairs of the Federal Medical Centres and university teaching hospitals (tertiary care).

A 2009 report by the New England Healthcare Institute determined that an increased demand on primary care by older, sicker patients and decreased supply of primary care practitioners has led to a crisis in primary care delivery. The research identified a set of innovations that could enhance the quality, efficiency and effectiveness of primary care in the United States.[6]

On March 23, 2010 President Obama signed the Patient Protection and Affordable Care Act (ACA) into law. The law is expected to expand health insurance coverage by 32 million people by 2016 and 34 million people by 2021.[9] The success of the expansion of health insurance under the ACA in large measure depends on the availability of primary care physicians. Unfortunately, The ACA has drastically exacerbated the projected deficit of primary care physicians needed to ensure care for insured Americans. According to the Association of American Medical Colleges (AAMC) without the ACA, the United States would have been short roughly 64,000 physicians by 2020; with the implementation of the ACA, it will be 91,000 physicians short. According to the AAMC's November 2009 physician work force report, nationally, the rate of physicians providing primary care is 79.4 physicians per 100,000 residents.[9]

US Strategies to Address the Primary Care Shortage

The Patient Protection Affordable Care Act contains a number of provisions to increase primary care capacity. These provisions are directed towards medical school graduates and include payment reform, student loan forgiveness programs and increased primary care residency positions [14] The PPACA also provides funding and mandates to increase the role of physician extenders like nurse practitioners and physician assistants to enhance the primary care workforce.[15] The PPCA is projected to increase patient demand for primary care services. Through the adoption of new patient care delivery models that include physicians working in tandem with nurse practitioners and physician assistants, demand for future primary care services could be met.[16] Consumer surveys have found the American public to be open to a greater role for physician extenders in the primary care setting.[17] Policies and laws, primarily at the state level, would need to redefine and reallocate the roles and responsibilities for non-physician licensed providers to optimize these new models of care.[18]