From Infogalactic: the planetary knowledge core
Jump to: navigation, search
For the property of metals, see refraction (metallurgy). For the magic effect, see David Penn (magician). For the refraction in atmosphere, see Atmospheric refraction.
Not to be confused with diffraction, the transmission and bending of waves around an obstacle.. 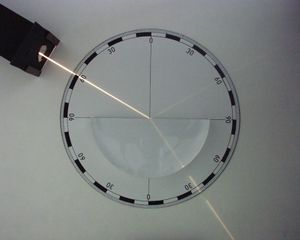 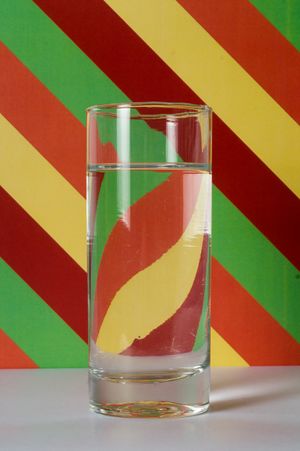 Refraction in a glass of water. The image is flipped. 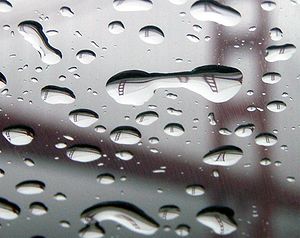 An image of the Golden Gate Bridge is refracted and bent by many differing three-dimensional drops of water.

Refraction is the change in direction of propagation of a wave due to a change in its transmission medium.

The phenomenon is explained by the conservation of energy and conservation of momentum. Due to change of medium, the phase velocity of the wave is changed but its frequency remains constant. This is most commonly observed when a wave passes from one medium to another at any angle other than 0° from the normal. Refraction of light is the most commonly observed phenomenon, but any type of wave can refract when it interacts with a medium, for example when sound waves pass from one medium into another or when water waves move into water of a different depth. Refraction is described by Snell's law, which states that for a given pair of media and a wave with a single frequency, the ratio of the sines of the angle of incidence θ1 and angle of refraction θ2 is equivalent to the ratio of phase velocities (v1 / v2) in the two media, or equivalently, to the opposite ratio of the indices of refraction (n2 / n1):

In general, the incident wave is partially refracted and partially reflected; the details of this behavior are described by the Fresnel equations. 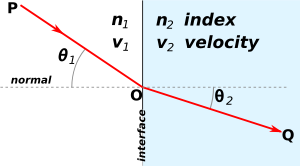 Refraction of light at the interface between two media of different refractive indices, with n2 > n1. Since the phase velocity is lower in the second medium (v2 < v1), the angle of refraction θ2 is less than the angle of incidence θ1; that is, the ray in the higher-index medium is closer to the normal.

In optics, refraction is a phenomenon that often occurs when waves travel from a medium with a given refractive index to a medium with another at an oblique angle. At the boundary between the media, the wave's phase velocity is altered, usually causing a change in direction. Its wavelength increases or decreases but its frequency remains constant.[citation needed] For example, a light ray will refract as it enters and leaves glass, assuming there is a change in refractive index. A ray traveling along the normal (perpendicular to the boundary) will change speed, but not direction. Refraction still occurs in this case. Understanding of this concept led to the invention of lenses and the refracting telescope. 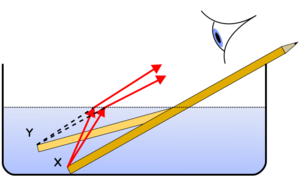 An object (in this case a pencil) part immersed in water looks bent due to refraction: the light waves from X change direction and so seem to originate at Y. (More accurately, for any angle of view, Y should be vertically above X, and the pencil should appear shorter, not longer as shown.)

Refraction can be seen when looking into a bowl of water. Air has a refractive index of about 1.0003, and water has a refractive index of about 1.3330. If a person looks at a straight object, such as a pencil or straw, which is placed at a slant, partially in the water, the object appears to bend at the water's surface. This is due to the bending of light rays as they move from the water to the air. Once the rays reach the eye, the eye traces them back as straight lines (lines of sight). The lines of sight (shown as dashed lines) intersect at a higher position than where the actual rays originated. This causes the pencil to appear higher and the water to appear shallower than it really is. The depth that the water appears to be when viewed from above is known as the apparent depth. This is an important consideration for spearfishing from the surface because it will make the target fish appear to be in a different place, and the fisher must aim lower to catch the fish. Conversely, an object above the water has a higher apparent height when viewed from below the water. The opposite correction must be made by an archer fish.[1] For small angles of incidence (measured from the normal, when sin θ is approximately the same as tan θ), the ratio of apparent to real depth is the ratio of the refractive indexes of air to that of water. But as the angle of incidence approaches 90o, the apparent depth approaches zero, albeit reflection increases, which limits observation at high angles of incidence. Conversely, the apparent height approaches infinity as the angle of incidence (from below) increases, but even earlier, as the angle of total internal reflection is approached, albeit the image also fades from view as this limit is approached. 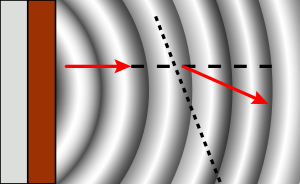 Diagram of refraction of water waves.

The diagram on the right shows an example of refraction in water waves. Ripples travel from the left and pass over a shallower region inclined at an angle to the wavefront. The waves travel slower in the more shallow water, so the wavelength decreases and the wave bends at the boundary. The dotted line represents the normal to the boundary. The dashed line represents the original direction of the waves. This phenomenon explains why waves on a shoreline tend to strike the shore close to a perpendicular angle. As the waves travel from deep water into shallower water near the shore, they are refracted from their original direction of travel to an angle more normal to the shoreline.[2] Refraction is also responsible for rainbows and for the splitting of white light into a rainbow-spectrum as it passes through a glass prism. Glass has a higher refractive index than air. When a beam of white light passes from air into a material having an index of refraction that varies with frequency, a phenomenon known as dispersion occurs, in which different coloured components of the white light are refracted at different angles, i.e., they bend by different amounts at the interface, so that they become separated. The different colors correspond to different frequencies.

While refraction allows for phenomena such as rainbows, it may also produce peculiar optical phenomena, such as mirages and Fata Morgana. These are caused by the change of the refractive index of air with temperature.

Recently some metamaterials have been created which have a negative refractive index. With metamaterials, we can also obtain total refraction phenomena when the wave impedances of the two media are matched. There is then no reflected wave.[3]

Also, since refraction can make objects appear closer than they are, it is responsible for allowing water to magnify objects. First, as light is entering a drop of water, it slows down. If the water's surface is not flat, then the light will be bent into a new path. This round shape will bend the light outwards and as it spreads out, the image you see gets larger.

Refraction of light at the interface between two media.

An analogy that is often put forward to explain the refraction of light is as follows: "Imagine a marching band as they march at an oblique angle from pavement (a fast medium) into mud (a slower medium). The marchers on the side that runs into the mud first will slow down first. This causes the whole band to pivot slightly toward the normal (make a smaller angle from the normal)."

An explanation of why refraction occurs when light travels from a medium with a given refractive index to a medium with another is easily explained by the path integral formulation of quantum mechanics (the complete method was developed in 1948 by Richard Feynman). Feynman humorously explained it himself in the recording "QED: Fits of Reflection and Transmission - Quantum Behaviour - Richard Feynman (The Sir Douglas Robb Lectures, University of Auckland, 1979)".

In medicine, particularly optometry, ophthalmology and orthoptics, refraction (also known as refractometry) is a clinical test in which a phoropter may be used by the appropriate eye care professional to determine the eye's refractive error and the best corrective lenses to be prescribed. A series of test lenses in graded optical powers or focal lengths are presented to determine which provides the sharpest, clearest vision.[4]

In underwater acoustics, refraction is the bending or curving of a sound ray that results when the ray passes through a sound speed gradient from a region of one sound speed to a region of a different speed. The amount of ray bending is dependent upon the amount of difference between sound speeds, that is, the variation in temperature, salinity, and pressure of the water.[5] Similar acoustics effects are also found in the Earth's atmosphere. The phenomenon of refraction of sound in the atmosphere has been known for centuries;[6] however, beginning in the early 1970s, widespread analysis of this effect came into vogue through the designing of urban highways and noise barriers to address the meteorological effects of bending of sound rays in the lower atmosphere.[7]