Reserve wine is a term given to a specific wine to imply that is of a higher quality than usual, or a wine that has been aged before being sold, or both. Traditionally winemakers would "reserve" some of their best wine rather than sell it immediately, coining the term.

In some countries the use of the term reserve/reserva/riserva is regulated, but in many places it is not. Sometimes, reserve wine originates from the best vineyards, or the best barrels, making it more special. Additionally, reserve wines might be made in a style suited to longer aging periods. However, in regions where the use is not regulated the mere presence of the term "reserve" on a wine label may be nothing but a marketing strategy. Indeed, in the case of one of the largest-selling premium wines, Kendall-Jackson Chardonnay, every single bottle produced is "Vintner's Reserve." To indicate a genuine reserve wine, Kendall-Jackson had to resort to "Grand Reserve," which has caused some confusion among consumers.

In similarity to the term "old vines," "reserve" is meant to indicate a wine that is special, or at least different in flavor or aging potential. In general, the more reputable the producer, the more likely the term "reserve" has a genuine meaning. Similarly, the presence of a non-reserve or "regular" bottling with a producer that also sells reserve wine makes it more likely that there is something unique inside. Partly because of the often vague meaning of "reserve," many wineries produce named cuvées instead. Typically these are reserve wines in the genuine meaning of the word. 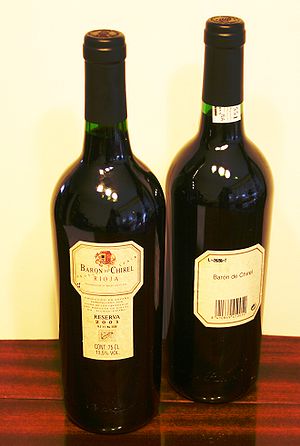 In Portugal and Spain, reserva is a regulated term controlled by law, at least ensuring that reserve wines get some additional ageing. In practice it is very difficult to regulate quality, so the term primarily deals with ageing and alcoholic strength.

In Portuguese and Spanish wines, the requirements varies between regions, but typically, when used on a label "Reserva" means that the wine was aged for at least three years in the cask and bottle, at least one of which must have been in the cask.[citation needed]

Those that have been aged for five years (two in cask, three in bottle) or more are labelled "Gran Reserva".[citation needed] Gran Reservas are intended to be made only in exceptional vintages, but this is up to the producer.

In Portugal the term indicates that the wine has an alcohol level of at least 0.5 percent above the regional minimum, and that it was made from a rated vintage.[citation needed]

In the production of "non-vintage" Champagne, a certain amount of aged still wine is used for blending with still wine of the youngest vintage, before this blended base wine undergoes second fermentation in bottle to become sparkling Champagne. This aged still wine is called reserve wine, and this practice is meant to ensure that a certain Champagne house's non-vintage product has a consistent style over the years. Since the reserve wine is used in the production process, it is never bottled and sold as it is, but the proportion and age of the reserve wine is often seen as one of the indicators of the quality of a Champagne and the producer's level of ambition.

In the Austrian Districtus Austriae Controllatus (DAC) system, most DACs have an additional Reserve designation for a wine which has slightly more strict requirements.

Before the 1971 German wine law, a term corresponding to reserve wine existed in kabinett, sometimes written as Kabinettwein. In 1971, the similar-sounding term Kabinett was instead introduced as the lowest level of the Prädikatswein category, i.e., with a completely different meaning. Therefore, in the present German wine classification no legally defined term corresponding to reserve wine exists.