The Citadel of Salah Ed-Din (Arabic: قلعة صلاح الدين‎‎, Qal'at Salah al-Din) is a castle in Syria. It is also known as Saône or Saladin Castle. It is located 7 km east of Al-Haffah town and 30 km east of the city of Latakia, in high mountainous terrain on a ridge between two deep ravines and surrounded by forest, the site has been fortified since at least the mid 10th century. In 975 the Byzantine Emperor John I Tzimiskes captured the site and it remained under Byzantine control until around 1108. Early in the 12th century the Franks assumed control of the site and it was part of the newly formed Crusader state of the Principality of Antioch. The Crusaders undertook an extensive building programme, giving the castle much of its current appearance. In 1188 it fell to the forces of Saladin after a three-day siege. The castle was again besieged in 1287, this time both defender and belligerent were Mamluks. In 2006, the castles of Qal'at Salah El-Din and Krak des Chevaliers was recognised as a World Heritage Site by UNESCO. The site is owned by the Syrian government. 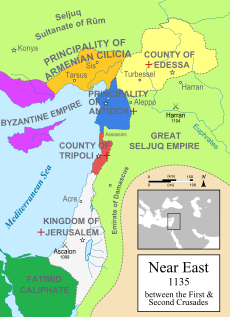 The Levant in 1135, with Crusader states marked by a red cross 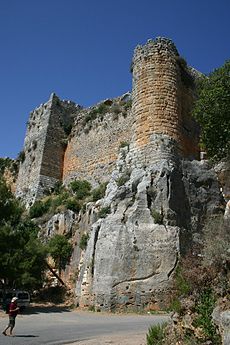 The traditional name of the site is Sahyun, the Arabic equivalent of Zion. This, according to historian Hugh N. Kennedy, is why it has now been given the more politically correct title of Qal'at Salah al-Din, meaning Saladin's Castle.[1] The site has been fortified since at least the mid-10th century. Byzantine Emperor John I Tzimiskes captured it in 975 from the Aleppan Hamdanid dynasty. It remained under Byzantine control until around 1108 when the Franks took control of Latakia, at which point it is likely they also took possession of Saône. It was part of the Principality of Antioch, one of the four states founded by the Crusaders after the First Crusade captured Jerusalem in 1099. The lords of Saône were amongst the most powerful in Antioch. The first lord of Saône was probably Robert the Leprous and it remained in his family until 1188. It was most likely Robert or his son, William, who built the Crusader castle around the previous Byzantine fortifications.[2] Most of what is evident today was built at this time. The fortress was notable as being one of the few which were not entrusted to the major military orders of the Hospitaller and the Templars.

On 27 July 1188 Saladin and his son, Az-Zahir Ghazi, arrived at Saône with an army and laid siege to the castle. The Muslim forces adopted two positions outside the castle: Saladin established himself with his siege engines on the plateau opposite the castle's east side while his son was set up facing the north of the castle's lower enclosure. Stones weighing between 50 and 300 kilograms (110 and 660 lb) hurled at the castle for two days, causing significant damage. On 29 July, the order to attack was given. Az-Zahir assaulted the castle town adjoining the castle's west, and the inhabitants sought refuge in the castle. The castle and town were supposed to be separated by a ditch, however at the north end the digging remained unfinished. Exploiting this, Az-Zahir successfully stormed the castle walls. The inner courtyard was overrun and the garrison retreated to the donjon or keep. Before the day ended they agreed terms with their attackers and were allowed to ransom themselves. Though Saône was a strong castle, it fell in just three days. Historian Hugh Kennedy speculates that, though the well-provisioned, this may have been because its garrison was not large enough and they did not have siege engines of their own.[3]

Saladin granted Saône and Bourzey Castle to one of his amirs, Mankawar. The pair descended through his heirs until 1272 when Saône was given to the Mamluk Sultan Baibars. Some time in the 1280s a new amir, Sunqur al-Ashqur, was in control and under him the castle became the administrative centre of a "small semi-independent emirate". In 1287 it was captured by the forces of Sultan Qala'un and made a part of the province of Tripoli.[4] In late 1286 and early 1287, Sultan Kalavun set out to repress his rivals which including curtailing Sunqur's independence. To this end the sultan sent an army under the command of Turuntay to establish a siege at Saône. Turuntay sent a message to Sunqur, saying that if he surrendered the sultan would pardon him; Sunqur refused and so the siege began. It soon became apparent that Sunqur's men could not hold the castle, and so in April he surrendered.[5]

The citadel was made a World Heritage Site by UNESCO, along with Krak des Chevaliers, in 2006.[6] During the Syrian uprising which began in 2011 UNESCO voiced concerns that the conflict might lead to the damage of important cultural sites such as Citadel of Salah Ed-Din.[7]

Saône was built on a ridge some 700 metres (2,300 ft) long between two deep gorges.[2] It guarded the route between Latakia and the city of Antioch.[8] The spur on which the castle is built is connected to a plateau in the east. The Byzantines defended the site by building a wall across the east side of the ridge. The walls created an irregular enclosure and were studded with flanking towers. Adjacent to the fortification, at the eastern end of the ridge was a settlement.[2] One of the most magnificent features of the fortress is the 28 m deep ditch, which was cut into living rock. The creation of the ditch has been attributed to the Byzantines.[9] This ditch, which runs 156 meters along the east side, is 14 to 20 meters wide and has a lonely 28 m high needle to support the drawbridge.

The entrance to the castle is through an entrance on the south side of the fortress. On the right of the entrance is a tower, a bastion built by the Crusaders. There is another a few meters further. There is a cistern for water storage and some stables just next to a massive keep that overlooks the ditch. This keep has walls of 5 m thick and it covers an area of nearly 24 m². Further on to the north is the gate where the drawbridge used to be. Also evident are the Byzantine citadel, located at the center of the fortress, another large cistern, the Crusader tea house, and a Crusader church adjoining one of two Byzantine chapels.

As for the Arab additions to the fortress they include a mosque, which dates back to sultan Qalawun, and a palace, which includes baths with courtyards and iwans. This has been slightly restored.