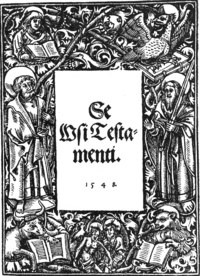 Cover of Se Wsi Testamenti, or the New Testament

Se Wsi Testamenti (Uusi testamentti in contemporary Finnish) is the first translation of the New Testament to Finnish, by Mikael Agricola, the Bishop of Turku. Generally regarded as his most prominent work, the manuscript was completed in 1543, but it underwent correction for five more years. The whole work took eleven years. The New Testament, printed in Stockholm in 1548, was still based mainly on the dialect of Turku.

Testamenti contains 718 pages and many illustrations. It has two prefaces, practical and theological. In the practical preface Agricola gives reasons for using the Turku dialect and tells how Christianity came into Finland. In the theological preface Agricola tells that his translation was based on the Greek original text (familiar to him particularly from his time with Melanchthon), a Latin collection by Erasmus of Rotterdam, a German translation by Martin Luther, as well as the Swedish bibles by Olaus Petri.

Agricola also explains how he had to create many new words and hoped they would be liked and put into use (which they have, although some of them, particularly of animals never seen in Finland fared less well after encounter with the real animal; such as jalopeura or "noble deer" for lion - now called leijona and kamelikurki or "camel crane" for ostrich - now called strutsi). "Se" (literally "that") in the title is a definite grammatical article (equivalent to "the" in English) that Agricola tried to institutionalize in Finnish but that never caught on. Contemporary Finnish lacks proper grammatical articles, as do most other Uralic languages.