From Infogalactic: the planetary knowledge core
Jump to: navigation, search
This article is about secession in ancient Rome. For other uses of secession, see Secession (disambiguation).

Secessio plebis (withdrawal of the commoners, or Secession of the Plebs) was an informal exercise of power by Rome's plebeian citizens, similar to a general strike taken to the extreme. During a secessio plebis, the plebs would simply abandon the city en masse and leave the patrician order to themselves. Therefore, a secessio meant that all shops and workshops would shut down and commercial transactions would largely cease. This was an effective strategy in the Conflict of the Orders due to strength in numbers; plebeian citizens made up the vast majority of Rome's populace and produced most of its food and resources, while a patrician citizen was a member of the minority upper class, the equivalent of the landed gentry of later times. Authors report different numbers for how many secessions there were. Cary & Scullard state there were five between 494 BC and 287 BC.[1] 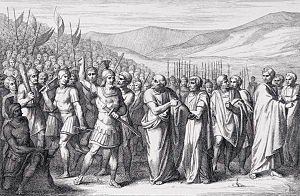 The Secession of the People to the Mons Sacer, engraving by B. Barloccini, 1849.

Beginning in 495 BC, and culminating in 494-493 BC, as a result of concerns about debt and the failure of the senate to provide for plebeian welfare, the plebeians seceded to the Mons Sacer (the Sacred Mountain). As part of a negotiated resolution, the patricians freed some of the plebs from their debts and conceded some of their power by creating the office of the Tribune of the Plebs. This office was the first government position held by the plebs, since at this time the office of consul was held by patricians solely. Plebeian Tribunes were made personally sacrosanct during their period in office.

The Second Secessio Plebis of 449 BC was caused by the abuses of a commission of the decemviri (ten men) and involved demands for the restoration of the plebeian tribunes (the representatives of the plebeians) and of the right to appeal, which had been suspended.

In 450 BC Rome decided to appoint the commission of the decemviri which was tasked with compiling a law code (which became the Law of the Twelve Tables). The commission was given a term of one year, during which the offices of state were suspended. The decemviri were also exempted from appeal. In 450 BC they issued a set of laws, but did not resign at the end of their term and became abusive. They killed a soldier who had been a plebeian tribune and who criticised them. One of the decemviri, Appius Claudius Crassus, tried to force a woman, Verginia, to marry him. To prevent this, her father stabbed her and cursed Appius Claudius Crassus. This sparked riots which started with the crowd which witnessed the incident and spread to the army which was encamped outside the city. The people went to the Aventine Hill.

The senate tried to get the decemviri to resign, but they refused. The people decided to withdraw en masse to Mons Sacer like in the first secession. The senate blamed this on the decemviri and managed to force them to resign. It sent two senators, Lucius Valerus Potitus and Marcus Horatius Barbatus, to Mons Sacer to negotiate. The people demanded the restoration of the plebeian tribunes and the right to appeal, which had been suspended during the term of the decemviri. This was agreed and they returned to the Aventine Hill and elected their tribunes.

Lucius Valerius Potitus and Marcus Horatius Barbatus became the consuls (the two annually elected heads of the Republic) for 449 BC. They introduced new laws which strengthened the rights of the plebeians. The lex Valeria Horatia de plebiscìtis provided that the laws passed by the Plebeian Council were binding of all Roman citizens (that is, both patricians and plebeians) despite patrician opposition to laws passed by this assembly being binding on them. However, after being passed, these laws had to receive the approval of the senate (acutoritas partum). This meant that the senate could veto the laws passed by the plebeians. Lex Valeria Horatia de senatus consulta ordered that the senatus consulta (the decrees of the senate) had to be kept in the temple of Ceres by the plebeian aediles, the assistants of the plebeian tribunes. This meant that the plebeian tribunes and aediles had knowledge of these decrees (previously they were kept secret).This put them in the public domain. Previously, the consuls had been in the habit of suppressing or altering them.[2][3] The lex Valeria Horatia de provocatio forbade the creation of offices of state which not subject to appeal.[4]

The third secession is alluded to by Florus (Lex Canuleia).

This fourth secession is noted by Livy. The Oxford Classical Dictionary calls this an "obscure military revolt".

In 287 BC, the plebs seceded a final time to the Janiculum to force the patricians to adopt the Lex Hortensia, which gave plebiscites the force of law.