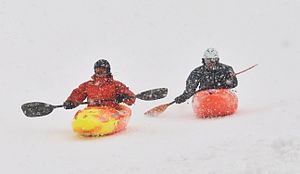 Snowkayaking or snowboating is a winter sport practised by experienced kayakers. In contrast to the summer sport, the medium of descent does not consist of rivers, but of snow, typically in the backcountry but occasionally at resorts and ski areas.[1] Races are held in a modus known from the snowboard sport and is called boatercross where four kayakers race against each other. The first two of each race will step forward in the next round.

Powder and backcountry snow kayaking have increased in popularity in the last few years and many videos can be found reflecting the increase in the sports popularity. Typically either playboats or creekboats can be used depending on the style of snowboating to be done. Although PFD's are not worn, drysuits, helmets, and paddles are typically all used.