From Infogalactic: the planetary knowledge core
Jump to: navigation, search
This article is about the logical fallacy. For other uses, see Straw man (disambiguation).
"Man of straw" redirects here. For the novel by Heinrich Mann, see Der Untertan.

A straw man is a common form of argument and is an informal fallacy based on giving the impression of refuting an opponent's argument, while actually refuting an argument which was not advanced by that opponent.[1]

The so-called typical "attacking a straw man" argument creates the illusion of having completely refuted or defeated an opponent's proposition by covertly replacing it with a different proposition (i.e., "stand up a straw man") and then to refute or defeat that false argument ("knock down a straw man") instead of the original proposition.[2][3]

This technique has been used throughout history in polemical debate, particularly in arguments about highly charged emotional issues where a fiery, entertaining "battle" and the defeat of an "enemy" may be more valued than critical thinking or understanding both sides of the issue.

In the United Kingdom the argument is also known as an Aunt Sally, after the pub game of the same name where patrons throw sticks or battens at a model of an old woman's head.[4][5] 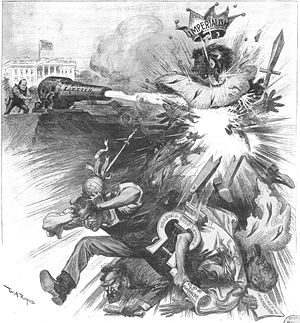 As a fallacy, the identification and name of straw man arguments are of relatively recent date, although Aristotle makes remarks that suggest a similar concern;[6] Douglas Walton identified "the first inclusion of it we can find in a textbook as an informal fallacy" in Stuart Chase's Guides to Straight Thinking from 1956 (p. 40).[6][7] However, Hamblin's classic text Fallacies (1970) neither mentions it as a distinct type, nor even as a historical term.[6][7] The idea of "men of straw" who can be knocked down by "the lightest puff, the smallest breath of truth," erected by invaders upon a field to scare away others who might join the movement, can be found in Victoria C. Woodhull's "The Scare-Crows of Sexual Slavery", written in 1873.[8]

The origins of the term are unclear. The usage of the term in rhetoric suggests a human figure made of straw which is easily knocked down or destroyed, such as a military training dummy, scarecrow, or effigy.[9] The rhetorical technique is sometimes called an Aunt Sally in the UK, with reference to a traditional fairground game in which objects are thrown at a fixed target. One common folk etymology is that it refers to men who stood outside courthouses with a straw in their shoe in order to indicate their willingness to be a false witness.[10]

The straw man fallacy occurs in the following pattern of argument:

This reasoning is a fallacy of relevance: it fails to address the proposition in question by misrepresenting the opposing position.

A: We should relax the laws on beer.
B: 'No, any society with unrestricted access to intoxicants loses its work ethic and goes only for immediate gratification.

The proposal was to relax laws on beer. Person B has exaggerated this to a position that is harder to defend, i.e., "unrestricted access to intoxicants". It is a logical fallacy because Person A never made that claim.

In a 1977 appeal of a U.S. bank robbery conviction, a prosecuting attorney said in his closing argument[11]

I submit to you that if you can't take this evidence and find these defendants guilty on this evidence then we might as well open all the banks and say, "Come on and get the money, boys", because we'll never be able to convict them.

This was a straw man designed to alarm the appeal judges; the idea that the precedent set by one case would literally make it impossible to convict any bank robbers is remote.

An example often given of a straw man is US President Richard Nixon's 1952 "Checkers speech".[12][13] When campaigning for vice president in 1952, Nixon was accused of having illegally appropriated $18,000 in campaign funds for his personal use. In a televised response, instead of addressing the funds, he spoke about another gift, a dog he had been given by a supporter:[12][13]

It was a little cocker spaniel dog, in a crate he had sent all the way from Texas, black and white, spotted, and our little girl Tricia, six years old, named it Checkers. And, you know, the kids, like all kids, loved the dog, and I just want to say this right now, that, regardless of what they say about it, we are going to keep it.

This was a straw man response; his critics had never criticized the dog as a gift or suggested he return it. This argument was successful at distracting many people from the funds, and portraying his critics as nitpicking and heartless. Nixon received an outpouring of public support and remained on the ticket. He and Eisenhower were elected by a landslide.

Christopher Tindale presents, as an example, the following passage from a draft of a bill (HCR 74) considered by the Louisiana State Legislature in 2001:[7]

Whereas, the writings of Charles Darwin, the father of evolution, promoted the justification of racism, and his books On the Origin of Species and The Descent of Man postulate a hierarchy of superior and inferior races. . . .

Therefore, be it resolved that the legislature of Louisiana does hereby deplore all instances and all ideologies of racism, does hereby reject the core concepts of Darwinist ideology that certain races and classes of humans are inherently superior to others, and does hereby condemn the extent to which these philosophies have been used to justify and approve racist practices.

Tindale comments that "the portrait painted of Darwinian ideology is a caricature, one not borne out by any objective survey of the works cited. That similar misrepresentations of Darwinian thinking have been used to justify and approve racist practices is beside the point: the position that the legislation is attacking and dismissing is a Straw Man. In subsequent debate this error was recognized, and the eventual bill omitted all mention of Darwin and Darwinist ideology."[7]

Aikin and Casey expanded on this model in 2010, introducing a third form. Referring to the "representative form" as the classic straw man, and the "selection form" as the weak man, a third form is called the hollow man. A hollow man argument is one that is a complete fabrication, where both the viewpoint and the opponent expressing it do not in fact exist, or at the very least the arguer has never encountered them. Such arguments frequently takes the form of vague phrasing such as "some say," "someone out there thinks" or similar weasel words, or it might attribute a non-existent argument to a broad movement in general, rather than an individual or organization.[15][16]

A variation on the selection form, or "weak man" argument, that combines with an ad hominem is nut picking, a neologism coined by Kevin Drum.[17] A portmanteau of "nut" (i.e., insane person) and cherry picking, nut picking refers to intentionally seeking out extremely fringe, non-representative statements and/or individuals from members of an opposing group and parading these around as evidence of that entire group's incompetence or irrationality.[15]