For the mentalist Kreskin (born 1935), see The Amazing Kreskin.

Jeron Criswell King (August 18, 1907 – October 4, 1982), born Jeron Criswell Konig, and known by his stage-name The Amazing Criswell /ˈkrɪzwɛl/, was an American psychic known for wildly inaccurate predictions. In person, he went by Charles Criswell King, and was sometimes credited as Jeron King Criswell.

Criswell was flamboyant, with spit curled hair, a stentorian style of speaking, and a sequined tuxedo. He owned a coffin in which he claimed to sleep. He grew up in a troubled family in Indiana with relatives who owned a funeral home, and said that he became comfortable with sleeping in caskets in the storeroom. The casket appeared in one of Ed Wood's later works, the 1971 pornographic film Necromania.

Criswell said he had once worked as a radio announcer and news broadcaster. He began buying time on a local Los Angeles television station in the early 1950s to run infomercials for his Criswell Family Vitamins. To fill the time, he began his "Criswell Predicts" part of the show. This made him a minor off-beat celebrity in Los Angeles and around Hollywood, and his friendship with old show-business people such as Mae West and rising fringe celebrities such as Korla Pandit made Criswell an entertaining presence at parties. His fame brought him appearances on The Jack Paar Show (1957–1962) which allowed him to publish his predictions in three publications of Spaceway Magazine (February 1955, April 1955, and June 1955), as well as run a weekly syndicated newspaper article. He later published three books of predictions; From Now to the Year 2000, Your Next Ten Years, and Forbidden Predictions. He also recorded a long playing record, Your Incredible Future (which was later released on CD), featuring 84 minutes of his predictions in his own voice. Criswell appeared in the movies of writer and director Ed Wood. After Criswell's death, his longtime friend Paul Marco released Criswell's song "Someone Walked Over My Grave" on a 7" record which was recorded by Criswell as a memorial song that he wanted released posthumously.

Criswell's predictions were nationally syndicated and he appeared on the television show Criswell Predicts on KLAC Channel 13 (now KCOP-13) in Los Angeles as well as being recorded for syndication. His announcer was Bob Shields, who later played the judge on Divorce Court. Criswell wore heavy makeup in public after his live program was broadcast in Los Angeles. Only selected people were allowed in the KCOP studio during his broadcast.

Criswell wrote several books of predictions, including 1968's Criswell Predicts: From Now to the Year 2000. In it, he claimed that Denver would be struck by a ray from space that would cause all metal to adopt the qualities of rubber, leading to horrific accidents at amusement parks.[3] He predicted mass cannibalism[4] and the end of planet Earth, which he set as happening on August 18, 1999.[4]

Criswell was a student of history. He believed history repeated itself, that the United States were the "modern Romans". Each day, he read the St. Louis Post-Dispatch looking for clues for his predictions.

Some sources claim Criswell's most famous prediction was on The Jack Paar Program (1962–65) in March 1963, when he predicted John F. Kennedy would not run for reelection in 1964 because something was going to happen to him in November 1963.[5]

Sources say that Criswell never claimed to be a real psychic; however, those who knew him, such as actress and fellow Plan 9 alumna Maila Nurmi ("Vampira"), believed he was. According to writer Charles A. Coulombe, whose family rented an apartment from him, Criswell told Coulombe's father "[I] had the gift, but ... lost it when I started taking money for it."

Criswell married a former speakeasy dancer named Halo Meadows, who appeared on You Bet Your Life, and whom Coulombe describes as "quite mad": "Mrs Criswell had a huge standard poodle (named "Buttercup") which she was convinced was the reincarnation of her cousin Thomas.[6] She spent a great deal of time sunbathing ... which, given her size, was not too pleasing a sight." 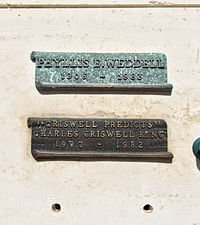 Niche of "The Amazing Criswell" at Valhalla Memorial Park

Mae West used Criswell as her personal psychic; he once predicted her rise to President of the United States, whereupon she, Criswell and George Liberace, the brother of showman Liberace, would take a rocket to the Moon.[6] Criswell and West were great friends and she would lavish him with home-cooked food she had delivered to the studio that he shared with Maila Nurmi ("Vampira").[7] It is said that West sold Criswell her old luxury cars for five dollars.[6]