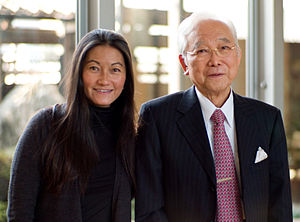 The Japan Times is Japan's largest English-language newspaper.[1] It is published by The Japan Times, Ltd. (株式会社 ジャパン タイムズ, Kabushiki gaisha Japan Taimuzu?), a subsidiary of Nifco, a leading manufacturer of plastic fasteners for the automotive and home design industries. It is headquartered in the Japan Times Nifco Building (ジャパンタイムズ・ニフコビル, Japan Taimuzu Nifuko Biru?) in Shibaura, Minato, Tokyo.[2][3]

The Japan Times was launched by Motosada Zumoto on March 22, 1897, with the goal of giving Japanese an opportunity to read and discuss news and current events in English in order to help Japan to participate more fully in the international community.[4] It was successively renamed The Japan Times and Mail (1918–1940) following its merger with The Japan Mail, The Japan Times and Advertiser (1940–1943) following its merger with The Japan Advertiser, and Nippon Times (1943–1956) before reverting to the Japan Times title in 1956.[citation needed] The temporary change to Nippon Times occurred during an anti-English language sentiment during World War II era Japan.[5]

At first, the paper was independent of government control, but from 1931 onward, the Japanese government was mounting pressure on the paper's editors to submit to its policies. In 1933, the Japanese Ministry of Foreign Affairs managed to appoint Hitoshi Ashida, former Ministry official, as chief editor.[6] During World War II, the newspaper served as an outlet for Imperial Japanese government propaganda and editorial opinion. The paper's circulation at that time was about 825,000.[4]

Since 16 October 2013, the Japan Times has been printed and sold along with the International New York Times.[11]

Printed stories from The Japan Times are archived online. The newspaper contains a reader's forum and, since 2013, the website offers a section for readers' comments below articles. This came about during a complete redesign and redevelopment of the newspaper, using Responsive Web Design techniques so that the site is optimised for all digital devices. The Japan Times has a social media presence on Twitter (2007), Facebook (2007) and Google+ (2011).[12]

Staff at The Japan Times are represented by two unions, one of which is Tozen.[18]