In structured finance, a tranche is one of a number of related securities offered as part of the same transaction. The word tranche is French for slice, section, series, or portion, and is cognate to English trench ('ditch'). In the financial sense of the word, each bond is a different slice of the deal's risk. Transaction documentation (see indenture) usually defines the tranches as different "classes" of notes, each identified by letter (e.g., the Class A, Class B, Class C securities) with different bond credit ratings (ratings).

The term tranche is used in fields of finance other than structured finance (such as in straight lending, where multi-tranche loans are commonplace), but the term's use in structured finance may be singled out as particularly important. Use of "tranche" as a verb is limited almost exclusively to this field.

All the tranches together make up what is referred to as the deal's capital structure or liability structure. They are generally paid sequentially from the most senior to most subordinate (and generally unsecured), although certain tranches with the same security may be paid pari passu. The more senior rated tranches generally have higher bond credit ratings (ratings) than the lower rated tranches. For example, senior tranches may be rated AAA, AA or A, while a junior, unsecured tranche may be rated BB. However, ratings can fluctuate after the debt is issued and even senior tranches could be rated below investment grade (less than BBB). The deal's indenture (its governing legal document) usually details the payment of the tranches in a section often referred to as the waterfall (because the moneys flow down).

Tranches with a first lien on the assets of the asset pool are referred to as senior tranches and are generally safer investments. Typical investors of these types of securities tend to be conduits, insurance companies, pension funds and other risk averse investors.

Tranches with either a second lien or no lien are often referred to as "junior notes". These are more risky investments because they are not secured by specific assets. The natural buyers of these securities tend to be hedge funds and other investors seeking higher risk/return profiles.

"Market information also suggests that the more junior tranches of structured products are often bought by specialist credit investors, while the senior tranches appear to be more attractive for a broader, less specialised investor community".[1] Here is a simplified example to demonstrate the principle: 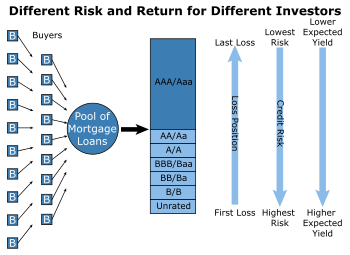 The cardinal principle in the mortgage crisis is a very old one. You are almost always better off restructuring a loan in a crisis with a borrower than going to a foreclosure. In the past that was never at issue because the loan was always in the hands of someone acting as a fiduciary. The bank, or someone like a bank owned them, and they always exercised their best judgement and their interest. The problem now with the size of securitization and so many loans are not in the hands of a portfolio lender but in a security where structurally nobody is acting as the fiduciary.