Walter "Wat" Tyler (died 15 June 1381) was a leader of the 1381 Peasants' Revolt in England. He marched a group of protesters from Canterbury to the capital to oppose the institution of a poll tax. While the brief rebellion enjoyed early success, Tyler was killed by officers loyal to King Richard II during negotiations at Smithfield, London.

Reliable knowledge of Wat Tyler's early life is limited. Born with the first name Walter, his original surname at birth is unknown, though "Hugh" and "Helier" have been suggested.[1][2] It is thought that the name "Tyler" comes from his occupation as a roof tiler. As the Peasants' Revolt arose in Kent, he has been variously claimed as coming from Dartford, Deptford, and Maidstone, all within that county.[1] Although he is famous for being one of the leaders of the 1381 uprising, a sixteenth-century source[1] indicates that a man of similar name, John Tyler, was its initiator. This account suggests that a poll-tax collector had indecently assaulted John Tyler's daughter. In revenge he killed the miscreant and triggered the insurgency.[3]

This began in response to a poll tax, a fixed amount charged to each member of a community regardless of financial status. The revolt was not only about money; the peasants were interested in universal freedom. They demanded that each labourer work for the employer of his choice, and sought an end to rigid social demarcation. The uprising represented a significant part of English society in that region, including nobility and wealthy religious establishments.[4] Another leader was John Ball, a rebel priest who sympathised with the cause as he believed that all humans should be treated equally, being descendants of Adam and Eve.[5] On 14 June the rebels marched on London. En route they attacked civil targets, destroying legal records and opening prisons.[6][7] 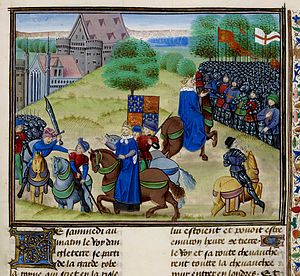 Tyler died the next day having pledged allegiance to the Crown. He and his supporters had asked to speak to the monarch—who consented, saying that they would receive compensation for their complaints if they recognised that English law be fully observed, and adding that if they went home peacefully they would be pardoned. According to a contemporary chronicler, Tyler acted contemptuously, calling for a flagon of water to rinse his mouth 'because of the great heat that he was in' and when he received the water 'he rinsed his mouth in a very rude and disgusting fashion before the King's face'. During heated discussions, Sir John Newton (ostensibly a servant of the King) insulted Tyler by calling him 'the greatest by man and robber in all Kent'. The recipient retaliated, to be restrained and arrested by the Mayor of London, William Walworth. Tyler then lashed out with his dagger. The Mayor, who happened to be wearing armour, was saved: he slashed his attacker across the neck and head with his sword. Another of the king's servants, John Cavendish (son of the Chief Justice of the same name), stabbed the man again, causing the fatal wound. Tyler managed to ride thirty yards on his horse yet was too weak to continue, whereupon he was dragged to the ground and publicly decapitated, his head being placed atop a pole and carried through the city to be displayed on London Bridge.[8] Richard II revoked all the promises and retributions he had promised Tyler. This effectively ended the Revolt.[9]

Wat Tyler is mentioned in Redburn by Herman Melville[10] and in A Connecticut Yankee in King Arthur's Court by Mark Twain.[11] John Gower had a rather harsh view of him in Vox Clamantis::I:IX "The jay's voice is wild and he has only learnt the art of speaking from the classes with whom the Latin poet is identified." [12]

A section of the A249 road passing through Maidstone is named "Wat Tyler Way" in his honour.

A road on the western edge of Blackheath called Wat Tyler Road.

Wat Tyler Country Park in Essex is named after him.

English folk singer-songwriter Frank Turner references Wat Tyler's negotiations at Smithfield in "Sons of Liberty" from the 2009 album Poetry of the Deed, and again mentions Tyler by name in "One Foot Before the Other" from 2011 album England Keep My Bones.