From Infogalactic: the planetary knowledge core
Jump to: navigation, search
For other uses, see Withdrawal (disambiguation). 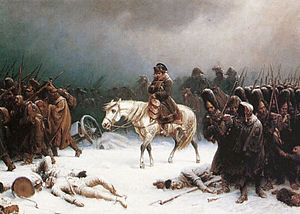 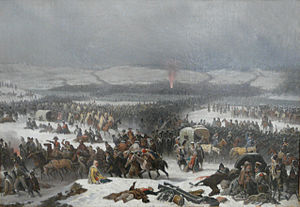 Napoleon's army at the retreat from Russia at the Berezina river

A withdrawal is a type of military operation, generally meaning retreating forces back while maintaining contact with the enemy. A withdrawal may be undertaken as part of a general retreat, to consolidate forces, to occupy ground that is more easily defended, or to lead the enemy into an ambush. It is considered a relatively risky operation, requiring discipline to keep from turning into a disorganized rout or at the very least doing severe damage to the military's morale.

A withdrawal may be anticipated, as when a defending force is outmatched or on disadvantageous ground, but must cause as much damage to an enemy as possible. In such a case, the retreating force may employ a number of tactics and strategies to further impede the enemy's progress. This could include setting mines or booby traps during or before withdrawal, leading the enemy into prepared artillery barrages, or the use of scorched earth tactics.

In warfare, the long term strategy is the defeat of the enemy. An effective tactical method is the demoralisation of the enemy by defeating their army and routing them from the battlefield. Once a force had become disorganized, losing its ability to fight, the victors can chase down the remnants and attempt to cause as many casualties or take as many prisoners as possible.

However a commander must weigh up the advantages of pursuit of a disorganised enemy against the possibility that the enemy may rally and leave the pursuing force vulnerable, with longer lines of communications vulnerable to a counterattack. Thus there was value in a feigned retreat.

The act of feigning a withdrawal or rout in order to lure an enemy away from a defended position or into a prepared ambush is an ancient tactic, and has been used throughout the history of warfare.

Withdrawal of a military occupation is anticipated and therefore tactical but may be subject to political rather than operational variables. The purpose of 'Troop withdrawal' from occupied territories may not involve engagement with an enemy and may be conducted during a period of ceasefire or relative peace as in the cases of Palestine.