From Infogalactic: the planetary knowledge core
Jump to: navigation, search
File:The Correct Angle at Which the New Wrns Hat Is To Be Worn. A8323.jpg
A WRNS rating during the Second World War 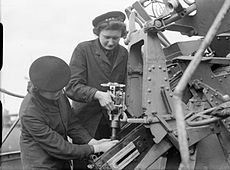 Two Ordnance Wrens in Liverpool reassemble a section of a pom-pom gun during the Second World War.

The Women's Royal Naval Service (WRNS; popularly and officially known as the Wrens) was the women's branch of the United Kingdom's Royal Navy. First formed in 1917 for the First World War, it was disbanded in 1919, then revived in 1939 at the beginning of the Second World War, remaining active until integrated into the Royal Navy in 1993. WRNs included cooks, clerks, wireless telegraphists, radar plotters, weapons analysts, range assessors, electricians and air mechanics.

Wrens were formed in 1917 during the First World War. On 10 October 1918, nineteen-year-old Josephine Carr from Cork, became the first Wren to die on active service, when her ship, the RMS Leinster was torpedoed. By the end of the war WRNS had 5,500 members, 500 of them officers. In addition, about 2000 members of the WRAF had previously served with the WRNS supporting the Royal Naval Air Service and were transferred on the creation of the Royal Air Force. It was disbanded in 1919.

WRNS was revived in 1939 at the beginning of the Second World War, with an expanded list of allowable activities, including flying transport planes. At its peak in 1944 it had 75,000 people. During the war there were 100 deaths. One of the slogans used in recruiting posters was "Join the Wrens—free a man for the fleet."

It remained in existence after the war and was finally integrated into the regular Royal Navy in 1993 when women were allowed to serve on board navy vessels as full members of the crew. In October 1990, during the Gulf War, HMS Brilliant allowed the first women to officially serve on an operational warship.[1]

Before 1993, all women in the Royal Navy were members of the WRNS except nurses, who joined (and still join) Queen Alexandra's Royal Naval Nursing Service, and medical and dental officers, who were commissioned directly into the Royal Navy, held RN ranks, and wore WRNS uniform with gold RN insignia. Female sailors are still known by the nicknames "wrens" or Jennies ("Jenny Wrens") in naval slang.

The WRNS had its own ranking system, which it retained until amalgamation into the Royal Navy in 1993.

Wrens wore the same rank insignia as their male equivalents, but in blue instead of gold. The "curls" atop officers' rank stripes were diamond-shaped instead of circular.

From 1939, Wren uniform consisted of a double-breasted jacket and skirt, with shirt and tie, for all ranks (although similar working dress to the men could also be worn). Junior Ratings wore hats similar to those of their male counterparts (although with a more sloping top). Senior Ratings (Petty Officers and above) and officers wore tricorne hats with a white cover. All insignia, including cap badges and non-substantive (trade) badges, were blue.