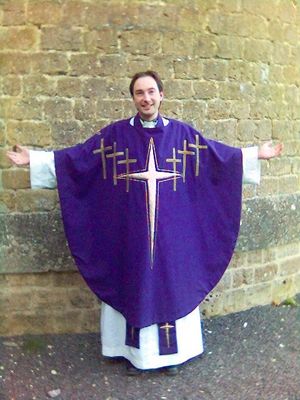 The chasuble /ˈtʃæzjʊbəl/ is the outermost liturgical vestment worn by clergy for the celebration of the Eucharist in Western-tradition Christian Churches that use full vestments, primarily in the Roman Catholic, Anglican and Lutheran[1] churches. In the Eastern Churches of Byzantine Rite, the equivalent vestment is the phelonion.

"The vestment proper to the priest celebrant at Mass and other sacred actions directly connected with Mass is, unless otherwise indicated, the chasuble, worn over the alb and stole" (General Instruction of the Roman Missal, 337). Like the stole, it is normally of the liturgical colour of the Mass being celebrated.

File:ChasubleToluca02.JPG
18th century chasuble from Mexico on display at the Museum of Fine Arts in Toluca

The chasuble originated as a sort of conical poncho, called in Latin a "casula" or "little house," that was the common outer traveling garment in the late Roman Empire. It was simply a roughly oval piece of cloth, with a round hole in the middle through which to pass the head, that fell below the knees on all sides. It had to be gathered up on the arms to allow the arms to be used freely.

In its liturgical use in the West, this garment was folded up from the sides to leave the hands free. Strings were sometimes used to assist in this task, and the deacon could help the priest in folding up the sides of the vestment. Beginning in the 13th century, there was a tendency to shorten the sides a little. In the course of the 15th and the following century, the chasuble took something like its modern form, in which the sides of the vestment no longer reach to the ankle but only, at most, to the wrist, making folding unnecessary.[2]

At the end of sixteenth century the chasuble, though still quite ample and covering part of the arms,[3] had become less similar to its traditional shape than to that which prevailed in the nineteenth and early twentieth centuries, when the chasuble was reduced to a broad scapular, leaving the whole of the arms quite free, and was shortened also in front and back. Additionally, to make it easier for the priest to join his hands when wearing a chasuble of stiff (lined and heavily embroidered) material, in these later centuries the front was often cut away further, giving it the distinctive shape often called "fiddleback". Complex decoration schemes were often used on chasubles of scapular form, especially the back, incorporating the image of the Christian cross or of a saint; and rich materials such as silk, cloth of gold or brocade were employed, especially in chasubles reserved for major celebrations.

In the 20th century, there began to be a return to an earlier, more ample, form of the chasuble, sometimes called "Gothic", as distinguished from the "Roman" scapular form.[4] This aroused some opposition, as a result of which the Sacred Congregation of Rites issued on 9 December 1925 a decree against it,[5] which it explicitly revoked with the declaration Circa dubium de forma paramentorum of 20 August 1957,[6] leaving the matter to the prudent judgement of local Ordinaries. There exists a photograph of Pope Pius XI wearing the more ample chasuble while celebrating Mass in Saint Peter's Basilica as early as 19 March 1930.[7]

After the Second Vatican Council the more ample form became the most usually seen form of the chasuble, and the directions of the GIRM quoted above indicate that "it is fitting" that the beauty should come "not from abundance of overly lavish ornamentation, but rather from the material that is used and from the design. Ornamentation on vestments should, moreover, consist of figures, that is, of images or symbols, that evoke sacred use, avoiding thereby anything unbecoming" (n. 344). Hence, the prevalence today of chasubles that reach almost to the ankles, and to the wrists, and decorated with relatively simple symbols or bands and orphreys. By comparison, "fiddleback" vestments were often extremely heavily embroidered or painted with detailed decorations or whole scenes depicted.

Use of scapular "Roman" chasubles, whether with straight edges or in "fiddleback" form, is sometimes associated with traditionalism. However, some priests prefer them simply on grounds of taste and comfort, while for similar reasons some traditionalist priests prefer ampler chasubles of less stiff material.

Pope Benedict XVI has sometimes used chasubles of the transitional style common at the end of the 16th century.[8]

In the Slav tradition, though not in the Greek, the phelonion, the Byzantine Rite vestment that corresponds to the chasuble, is cut away from the front and not from the sides, making it look somewhat like the western cope.

Many but not all Lutheran and Anglican churches make use of the chasuble. It has always been used by the Lutheran churches of Scandinavia, which also practice weekly Communion. German Lutherans used it for the first two hundred years after the Reformation but later replaced it with the Geneva Gown. It was also the practice of German Lutherans to celebrate Communion on a less than weekly basis. A variety of practices emerged in North America but by the mid-20th century, the alb and stole became widely customary. More recently, the chasuble has been readopted for Communion services in both Germany and North America.[9]

It is not customary and rarely seen in Protestantism outside of the liturgical churches.

In Oscar Wilde's 1895 play The Importance of Being Earnest, Dr. Chasuble is a clergyman who, in the 2002 film adaptation, is seen wearing his namesake robe.