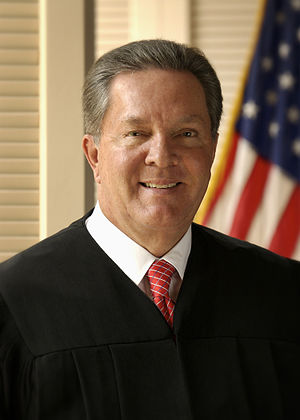 Milan Dale Smith, Jr. (born May 19, 1942) is a federal judge on the United States Court of Appeals for the Ninth Circuit, based in El Segundo, California.[1]

Smith was born in Pendleton, Oregon. He was the son of Milan D. Smith, Sr., who would serve on the staff of Secretary of Agriculture, Ezra Taft Benson. He received a B.A. from Brigham Young University in 1966.

Smith earned a J.D. from the University of Chicago Law School in 1969. Before becoming a judge, he was the managing partner at the law firm of Smith, Crane, Robinson, and Parker, which he co-founded in 1972. He was a President-General Counsel of the Los Angeles State Building Authority from 1983 to 2006. Smith was a Vice Chairman of the California Fair Employment and Housing Commission from 1987 to 1991.

Smith was nominated by President George W. Bush on February 14, 2006 to fill a seat vacated by Judge A. Wallace Tashima.[2] He was confirmed just over three months later by the United States Senate on May 16, 2006 by a vote of 93-0.[3] He was the fifth judge appointed to the Ninth Circuit by Bush, and the first since Carlos Bea was confirmed in 2003.

Judge Smith has been one of the Ninth Circuit's most prolific writers. According to one periodical, he authored the most majority opinions of any judge on the Ninth Circuit in the three-year period ending on May 10, 2013.[4]

In July 2007, in Lands Council v. McNair, Judge Smith wrote a concurrence described as "unusually blunt and wide-ranging", in which he criticized the court for "taking the law too far and causing much of 'the decimation of the logging industry in the Pacific Northwest' and the loss of legions of timber jobs."[6] Judge Smith's view prevailed when the case was reviewed en banc. He wrote the opinion for the unanimous eleven-judge panel in July 2008.

In September 2008, Judge Smith was the one dissenter on a three judge panel that held that a school ban of an instrumental version of "Ave Maria" did not violate students' freedom of speech and religion.[7]

Judge Smith wrote the majority opinion in United States v. Alvarez, which struck down the Stolen Valor Act of 2005. The panel ruled, 2 to 1, that the law violated the First Amendment. "The right to speak and write whatever one chooses - including, to some degree, worthless, offensive and demonstrable untruths - without cowering in fear of a powerful government is, in our view, an essential component of the protection afforded by the First Amendment," Judge Smith wrote in the majority opinion. The Supreme Court affirmed the judgment in a 6–3 decision.[8]

In Christopher v. Smithkline Beecham Corp., 635 F.3d 383, Judge Smith wrote that pharmaceutical sales representatives were "outside salesmen" and therefore not entitled to overtime pay under the federal Fair Labor Standards Act. In so holding, Judge Smith declined to afford controlling deference to the Department of Labor's contrary view, and expressly disagreed with the Second Circuit Court of Appeals' prior decision to do so. The Supreme Court affirmed the judgment of the Ninth Circuit. The Court agreed with the Ninth Circuit that the pharmaceutical representatives are "salesmen," and similarly rejected the Department of Labor's interpretation of the statute.[9]

In Lane v. Facebook, 709 F. 3d 791 (9th Cir. 2013), Judge Smith, writing for five other judges, dissented from the failure to take a class action case en banc, citing potential problems with the use of cy pres relief in the class action settlement context. When the Supreme court denied certiorari, Chief Justice Roberts noted that the Supreme Court may need to address the issue of cy pres settlements in future cases.[10] Smith's dissent was later selected for publication in the Green Bag Law Review's Almanac and Reader as an example of excellent legal writing produced in 2013. [11]

In Shell Offshore v. Greenpeace, 709 F.3d 1281 (9th Cir. 2013), Judge Smith dissented from a panel opinion upholding an injunction against Greenpeace USA relating to Greenpeace's opposition to Shell's plan to drill for oil in the Arctic. Judge Gould, writing for five other Ninth Circuit judges, later dissented from the failure to take the case en banc, writing that "the dissent of Judge M. Smith has the better position as contrasted with the majority opinion" and noting that the majority opinion "relies on a guilt-by-association model that offends justice." 722 F.3d 1144 (9th Cir. 2013)

In Natural Resources Defense Counsel v. County of Los Angeles, 725 F.3d 1194 (9th Cir. 2013), Judge Smith wrote an opinion for a unanimous panel concluding that pollution exceedances detected at monitoring stations of the County of Los Angeles and the Los Angeles County Flood Control District were sufficient to establish the County’s liability under the Clean Water Act. The Supreme Court declined to review this decision.

In Haskell v. Harris, 669 F.3d 1049 (9th Cir. 2012), Judge Smith, writing for the majority of a three-judge panel, concluded that a California law requiring police officers to collect DNA samples from adults arrested for felonies did not violate the Fourth Amendment. After the Ninth Circuit elected to rehear this case en banc, the Supreme Court held in Maryland v. King that a Maryland law requiring the collection of DNA samples from arrestees charged with "serious crimes" was constitutional. Thereafter, a majority of the 11-judge en banc panel refused to bar implementation of the California law. Haskell v. Harris, 745 F.3d 1269 (9th Cir. 2014) (per curiam), without deciding whether the state might be unconstitutional as applied to at least some arrestees. In a concurring opinion, Judge Smith maintained that the California law is "materially indistinguishable from the Maryland law .... " Id. at 1271. He therefore concluded that "[t]his case is over, and the district court has no obligation to give the Plaintiffs an opportunity to amend their complaint." The case remains pending in the U.S. District Court for the Northern District of California.