The 39th (Dorsetshire) Regiment of Foot was an infantry regiment of the British Army, formed in 1719 and amalgamated into The Dorsetshire Regiment in 1881.

In 1751, they were numbered the 39th Regiment of Foot, and in 1782 took a county title as the 39th (East Middlesex) Regiment of Foot. In 1794 the regiment was captured, and reformed in Ireland the following year by absorbing the short-lived 104th Regiment of Foot (Royal Manchester Volunteers). The 39th participated in a task force under Major-General John Whyte to capture the Dutch settlements of Demerara, Essequibo, and Berbice in April and May 1796. 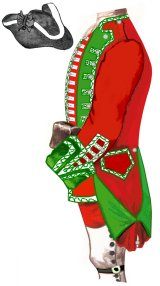 In 1805 a number of regiments had their territorial affiliations shuffled, with the East Middlesex title passing to the 77th Foot and the 39th taking the Dorsetshire title previously held by the 35th (Sussex) Regiment of Foot to become the 39th (Dorsetshire) Regiment of Foot. The 39th arrived in the British colony of New South Wales toward the end of 1825. The regiment saw service in Hobart, Sydney, Swan River colony and Bathurst, leaving on July 5, 1832 to see service in India.