Berbice is a region along the Berbice River in Guyana, which was between 1627 and 1815 a colony of the Netherlands. After having been ceded to the United Kingdom in the latter year, it was merged with Essequibo and Demerara to form the colony of British Guiana in 1831. In 1966, British Guiana gained independence as Guyana.

After being a hereditary fief in the possession of the Van Peere family, the colony was governed by the Society of Berbice in the second half of the colonial period, akin to the neighbouring colony of Suriname, which was governed by the Society of Suriname. The capital of Berbice was at Fort Nassau until 1790. In that year, the town of New Amsterdam, which grew around Fort Sint Andries, was made the new capital of the colony. 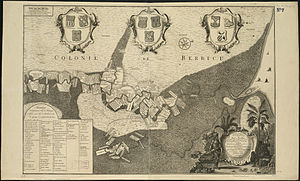 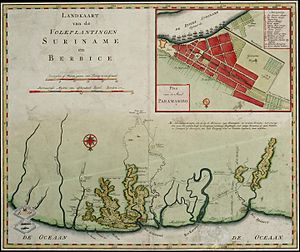 Berbice and Suriname around 1767. 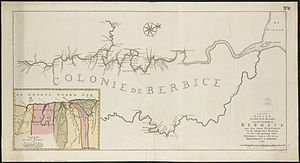 Berbice was settled in 1627 by the businessman Abraham van Peere from Vlissingen, under the suzerainty of the Dutch West India Company. Until 1714, the colony remained the personal possession of Van Peere and his descendants. Little is known about the early years of the colony, other than that it succeeded in repelling an English attack in 1665 in the Second Anglo-Dutch War.[1][2]

In November 1712, Berbice was briefly occupied by the French under Jacques Cassard, as part of the War of the Spanish Succession. The Van Peere family did not want to pay a ransom to the French to free the colony, and in order to not let the colony cede to the French, the brothers Nicolaas and Hendrik van Hoorn, Arnold Dix, Pieter Schuurmans, and Cornelis van Peere, paid the ransom on 24 October 1714, thereby acquiring the colony.[4][5]

In 1720, the five owners of the colony founded a Society of Berbice, akin to the Society of Suriname which governed the neighbouring colony, to raise more capital for the colony. In the years following, Berbice's economic situation improved, consisting of 12 plantations owned by the society, 93 private plantation along the Berbice River, and 20 plantations along the Canje River.[6]

In 1733, village which had sprung up around Fort Nassau was named New Amsterdam (Dutch: Nieuw Amsterdam). The fort and the village were abandoned in 1785 in favour of Fort Sint Andries, situated more downstream, at the confluence of the Canje River. The new village was again named New Amsterdam, and is still known by that name in contemporary Guyana.[7]

The relatively sound economic situation of the colony was dealt a severe blow when a slave uprising broke out under the leadership of Cuffy in February 1763. The uprising went on until well into 1764, with Cuffy naming himself governor of Berbice. Only with the use of brute force was governor Wolfert Simon van Hoogenheim able to finally suppress the uprising, and restore the colony to Dutch rule.[6]

Capture by Britain and subsequent merging into British Guiana

On 27 February 1781, British forces occupied Berbice and neighbouring Demerara and Essequibo as part of the Fourth Anglo-Dutch War, but in January 1782, the colonies were recaptured by the French, who were allied with the Dutch, and who subsequently restored the colonies to Dutch rule with the Treaty of Paris of 1783.[8] The colony was on 22 April 1796 again captured by Britain, however who now remained in possession of the colony until 27 March 1802, when Berbice was restored to the Batavian Republic under the terms of the Treaty of Amiens. In September 1803 the British occupied the territory again, this time for good. In the Anglo-Dutch Treaty of 1814, the colony was formally ceded to the United Kingdom, and with the ratification of this treaty by the Netherlands on 20 November 1815, all Dutch legal claims to the colony were rescinded.

As part of the reforms of the newly acquired colonies on the South American mainland, the British merged Berbice with Demerara-Essequibo on 21 July 1831, forming the new crown colony of British Guiana, now Guyana.

In 1838, Berbice was made one of the three counties of Guiana, the other two being Demerara and Essequibo.[9] In 1958, the county was abolished when Guiana was subdivided into districts.[9]

Currently,[update] historical Berbice is part of several Guyanese administrative regions and the name is preserved in the regions of East Berbice-Corentyne, Mahaica-Berbice, and Upper Demerara-Berbice.[9]

Berbice Creole Dutch, a Dutch creole language based on the lexicon and grammar of the West African language Ijo, was spoken until well into the 20th century.