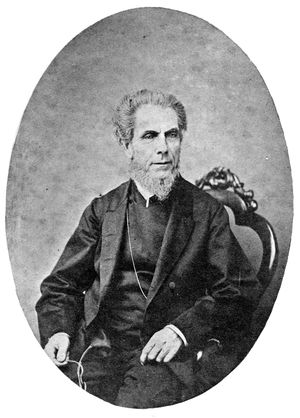 Aaron Buzacott the elder (March 4, 1800 - September 20, 1864), a Congregationalist colleague of John Williams (the 'Martyr of Erromanga'), author of ethnographic works and co-translator of the Bible into the language of Rarotonga, was a central figure in the South Seas missionary work of the London Missionary Society, living on Rarotonga (one of the Cook Islands) between 1828 and 1857.

Greatly influenced by his mother, he was born in South Moulton, Devon where his father was a whitesmith and ironmonger and the family attended the local Congregational chapel. Sarah, his wife, was also from South Moulton, and became known for her educational work and writings in the South Seas mission. Her sisters also married missionaries, and her brother, Mr George Hitchcock, a friend and neighbour of Samuel Morley's at St Paul's Churchyard, became noted for his support of Congregationalism and his support for the nascent Young Men's Christian Association (YMCA).

Aaron Buzacott entered Hoxton Academy in 1820 and devoted himself for three years to the study of general and classical literature and frequently attended the metropolitan Methodist chapels, the Tottenham Court Road Chapel and Moorfields Chapel (Whitefield's Tabernacle). Expressing an interest in missionary work, his tutors commended him to the Board of the London Missionary Society, and after examination they accepted him for training at their Mission College under Dr Bogue. Upon his death the students were transferred to Highbury College and the old Hoxton Academy near London. He completed his course in 1826, being ordained in January 1827 at Castle Street Congregational Church in Exeter. He married Miss Hitchcock the following month and later that year the couple set sail, via Tahiti, for Rarotonga in the South Seas, where they were to spend most of the rest of their lives.

Missionary work in the South Seas

Aaron Buzacott considered schools constitute one of the most important departments of missionary labour, and he paid special attention to the selection and education of native people. This purpose was advanced by his purchase of a piece of land on Avarua (Rarotonga) for 150 dollars, funded by the London Missionary Society; around which he paid for a stone wall built, and within which four cottages for Rarotongan families and single men, and a college building which still exists (Takamoa Theological College), were completed. Besides Mr Buzacott himself, the college was also staffed by Mrs Sarah Buzacott - who taught the married women students writing, arithmetic and needlework. The building architecture was designed to withstand the most violent hurricanes and was still in good condition when the Buzacott family left in 1857 owing to Aaron's ill health.

The work of the college built on educational work to record Cook Islands Maori and print books in the native language. English only became the dominant language on the islands after the missionary period, and though it was taught at the college, the training of local pastors to encourage reading in the native language was seen as the key. This project of education in the native language, had begun in 1821 with the arrival of the missionary John Williams on Aitutaki. In 1823 his entourage, which included the native Tahitian from Borabora, Papehia, arrived on Rarotonga, soon to be joined by Charles Pitman in 1827 and, in 1828, by Buzacott. Initial translation of the Bible commenced in 1828 and was completed in 1851. Buzacott's Te Akataka Reo Rarotonga (published 1854-69) long remained the authoritative grammatical resource. By the early 1830s a printing press was in full operation under Buzacott's guidance, and by the mid-1850s most Rarotongans were able to read.

In 1831 Aaron Buzacott visited all the islands in the Hervey Group, with John Williams, and found them to suffer badly from hurricanes and cyclones during the winter. To help prevent famine he introduced the sweet potato, growing a crop in a piece of ground granted by the chief. Intense interest was arounsed when he showed that the crop could be sold to a passing captain in exchange for coloured calicoes. The effect was magical records Mr Buzacott, Chiefs and people were eager for 'eyes' and 'tops' for planting. a suitable district was fixed upon and in a given week the whole population turned out. In the following year Mr Buzacott and John Williams traveled to Tahiti together.

Aaron Buzacott later visited Samoa (in 1834, and again in 1836) where he found American and English sailors who had run away from whaling ships, living on the islands with the permission of Samoan Chiefs but without schools. Mr Buzacott wrote: It was pleasing to observe, by contrasting the present condition of Rarotonga with that of Samoa, the progress the gospel had already made among us.

Aaron Buzacott visited England 1847-51, being for that time a communicant under the pastoral care of the Rev. Henry Allon of Union Chapel, Islington, near London. 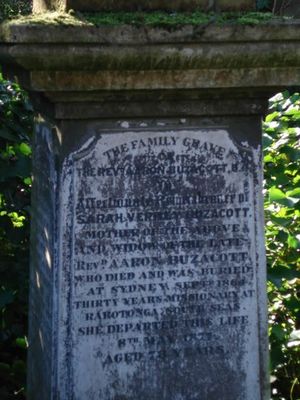 Retiring for health reasons, to New South Wales in 1857, Aaron Buzacott died there on September 20, 1864, attended by his wife and many friends. His funeral was held on 21 September, a Presbyterian minister reading from Scripture, and the procession then moving on to the Bourke Street Congregational Church where Rev Hartley, a Primitive Methodist, gave out the hymn. He was buried in the Congregational burying-ground in Devonshire Street, Sydney, now the location of the Central Railway Station.

Much of his contribution to published ethnographic knowledge of the Cook Islands, Samoa and Melanesia, was set out in a volume that was published posthumously in 1866 back in London, edited by his son and J. P. Sunderland, and with a preface by the Rev. Henry Allon. The work was concluded by several letters to Mrs. Buzacott written just after the death of her husband and in high estimation of him, and a list of diseases prevalent in the islands of the South Seas.

Aaron's widow Sarah Verney Buzacott, who kept her own written account of life in the coral islands of the Pacific, died some while later in England, and is buried at the Congregationalist's Abney Park Cemetery, Stoke Newington, London. Their son, Rev. Aaron Buzacott the younger (1829–81) - who styled himself Rev Aaron Buzcott BA to distinguish his work from that of his father - became Secretary of the Anti-Slavery Society - now Anti-Slavery International - and pastor (c.1870) of the Asylum Road Congregational Chapel, later known as the Clifton Congregational Chapel, Peckham; he is buried with his mother at Abney Park Cemetery.

Today the two-story Takamoa Mission House in the coastal town of Avarua, erected by Aaron Buzacott, is a government office; and the settlement of Arorangi, established by the Rev. Aaron Buzacott as a model village to resettle people near the coast under a native pastor, a tourist destination.