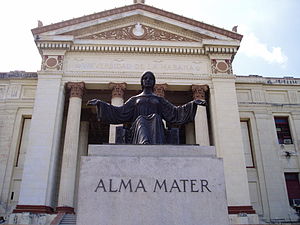 The Alma Mater statue by Mario Korbel, at the entrance of the University of Havana in Cuba.

Alma mater (Latin: alma "nourishing/kind", mater "mother"; pl. [rarely used] almae matres) is an allegorical Latin phrase for a university or college. It is used to refer to a school which an individual has attended.[1] In English, the phrase is variously translated as "nourishing mother", "nursing mother", or "fostering mother", suggesting that a school provides intellectual nourishment to its students.[2]

Before its modern usage, Alma mater was an honorific title in Latin for various mother goddesses, especially Ceres or Cybele,[3] and later in Catholicism for the Virgin Mary. The source of its current use is the motto Alma Mater Studiorum ("nurturing mother of studies") of the oldest university in the Western world in continuous operation: the University of Bologna, founded in 1088. It is related to the term alumnus, denoting a university graduate, and literally meaning a "nursling" or "one who is nourished".[4]

The term may also refer to a song or hymn associated with a school.[5] 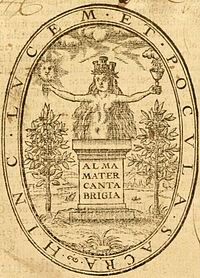 Although alma (nourishing) was a common epithet for Ceres, Cybele, Venus, and other mother goddesses, it was not frequently used in conjunction with mater in classical Latin.[6] In the Oxford Latin Dictionary, the phrase is attributed to Lucretius' De rerum natura, where it is used as an epithet to describe an earth goddess:

After the fall of Rome, the term came into Christian liturgical usage in association with the Virgin Mary. "Alma Redemptoris Mater" is a well-known 11th century antiphon devoted to Mary.[6]

The earliest documented English use of the term to refer to a university is in 1600, when University of Cambridge printer John Legate began using an emblem for the university's press.[7][8] The device's first-known appearance is on the title-page of William Perkins' A Golden Chain, where the phrase Alma Mater Cantabrigia ("nourishing mother Cambridge") is inscribed on a pedestal bearing a nude, lactating woman wearing a mural crown.[9][10] In English etymological reference works, the first university-related usage is often cited in 1710, when an academic mother-figure is mentioned in a remembrance of Henry More by Richard Ward.[11][12]

Many historic European universities have adopted Alma Mater as the Latin translation of their official name. The University of Bologna Latin name, Alma Mater Studiorum (nourishing mother of studies), refers to its status as the oldest continuously operating university in the world. Other European universities, such as the Alma Mater Lipsiensis in Leipzig, Germany, or Alma Mater Jagiellonica, Poland, have similarly used the expression in conjunction with geographical or foundational characteristics. At least one, the Alma Mater Europaea in Salzburg, Austria, an international university founded by the European Academy of Sciences and Arts in 2010, uses the term as its official name.

The College of William & Mary in Williamsburg, Virginia, has been called the "Alma Mater of a Nation" because of its ties to the founding of the United States.[13] 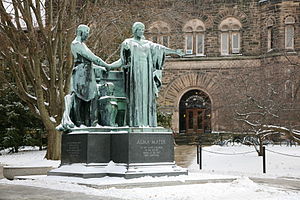 The ancient Roman world had many statues of the Alma Mater, some still existent (e.g. at the Palatine Hill in Rome). She was considered the central deity in the Aventine Triad.[citation needed]

Modern sculptures are found in prominent locations on several American university campuses. There is a well-known bronze statue of Alma Mater by Daniel Chester French situated on the steps of Columbia University's Low Library. The University of Illinois at Urbana–Champaign also has an Alma Mater statue by Lorado Taft. An altarpiece mural in Yale University's Sterling Memorial Library depicts the Alma Mater as a bearer of light and truth standing in the midst of the personified arts and sciences, painted in 1932 by Eugene Savage.

Outside the United States, there is an Alma Mater sculpture on the steps of the monumental entrance to the Universidad de La Habana, in Havana, Cuba. The statue was cast in 1919 by Mario Korbel, with Feliciana Villalón Wilson as the inspiration for Alma Mater. It was installed in its current location in 1927 at the direction of architect Raul Otero.[14]