From Infogalactic: the planetary knowledge core
Jump to: navigation, search
Not to be confused with palato-alveolar consonant. 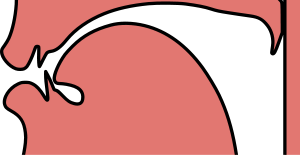 In phonetics, alveolo-palatal (or alveopalatal) consonants, sometimes synonymous with pre-palatal consonants, are intermediate in articulation between the coronal and dorsal consonants, or which have simultaneous alveolar and palatal articulation. In the official IPA chart, alveolo-palatals would appear between the retroflex and palatal consonants but for "lack of space".[1] Ladefoged and Maddieson characterize the alveolo-palatals as palatalized postalveolars (palatalized palato-alveolars), articulated with the blade of the tongue behind the alveolar ridge and the body of the tongue raised toward the palate,[2] whereas Esling describes them as advanced palatals (pre-palatals), the furthest front of the dorsal consonants, articulated with the body of the tongue approaching the alveolar ridge.[1] These descriptions are essentially equivalent, since the contact includes both the blade and body (but not the tip) of the tongue (see schematic at right). They are front enough that the fricatives and affricates are sibilants, the only sibilants among the dorsal consonants.

For example, the Polish nasal represented with the letter ń is a palatalized laminal alveolar nasal and thus often described as alveolo-palatal rather than palatal. The "palatal" consonants of Indigenous Australian languages are also often judged closer to alveolo-palatal in their articulation.