"Anti-imperialism" in political science and international relations is a term used in a variety of contexts, usually by nationalist movements, who want to secede from a larger polity (usually in the form of an empire, but also in a multi-ethnic sovereign state) or as a specific theory opposed to capitalism in Marxist–Leninist discourse, derived from Vladimir Lenin's work Imperialism, the Highest Stage of Capitalism. A less common usage is by isolationists who oppose an interventionist foreign policy.

People who categorise themselves as anti-imperialists, often state that they are opposed to colonialism, colonial empire, hegemony, imperialism and territorial expansion of a country beyond its established borders.[1] The phrase gained a wide currency after the Second World War and at the onset of the Cold War as political movements in colonies of European powers promoted national sovereignty. Some "anti-imperialist" groups who opposed the United States, supported the power of the Soviet Union, such as in Guevarism, while in Maoism, this was criticised as "social imperialism." In the Arab and Muslim world, the term is often used in the context of Anti-Zionist nationalist and religious movements. 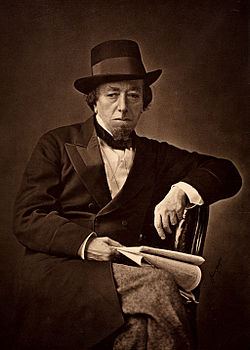 Benjamin Disraeli, Prime Minister of Britain from 1874 to 1880, expanded the British Empire.

In the late 1870s, the term Imperialism was introduced to the English language by opponents of the aggressively imperial policies of British Prime Minister Benjamin Disraeli (1874–80).[2] It was shortly appropriated by supporters of "imperialism" such as Joseph Chamberlain. For some, imperialism designated a policy of idealism and philanthropy; others alleged that it was characterized by political self-interest, and a growing number associated it with capitalist greed. John A. Hobson and Lenin added a more theoretical macroeconomic connotation to the term. Many theoreticians on the left have followed either or both in emphasizing the structural or systemic character of "imperialism." Such writers have expanded the time period associated with the term so that it now designates neither a policy, nor a short space of decades in the late 19th century, but a global system extending over a period of centuries, often going back to Christopher Columbus and, in some facts, to the Crusades. As the application of the term has expanded, its meaning has shifted along five distinct but often parallel axes: the moral, the economic, the systemic, the cultural, and the temporal. Those changes reflect—among other shifts in sensibility—a growing unease with the fact of power, specifically, Western power.[3][4]

The relationships among capitalism, aristocracy, and imperialism have been discussed and analysed by theoreticians, historians, political scientists such as John A. Hobson and Thorstein Veblen, Joseph Schumpeter and Norman Angell.[5] Those intellectuals produced much of their works about imperialism before the First World War (1914–18), yet their combined work informed the study of the impact of imperialism upon Europe, and contributed to the political and ideologic reflections on the rise of the military–industrial complex in the US from the 1950s onwards.

J. A. Hobson said that domestic social reforms could cure the international disease of imperialism by removing its economic foundation. Hobson theorized that state intervention through taxation could boost broader consumption, create wealth, and encourage a peaceful multilateral world order. Conversely, should the state not intervene, rentiers (people who earn income from property or securities) would generate socially negative wealth that fostered imperialism and protectionism.[6][7]

As a self-conscious political movement, anti-imperialism originated in Europe in the late 19th and early 20th centuries, in opposition to the growing European colonial empires and the US control of the Philippines after 1898.[8] However, it reached its highest level of popular support in the colonies themselves, where it formed the basis for a wide variety of national liberation movements during the mid-20th century and later. These movements, and their anti-imperialist ideas, were instrumental in the decolonization process of the 1950s and 1960s, which saw most European colonies in Asia and Africa achieving their independence.[9]

An early use of the term "anti-imperialist" occurred after the United States entered the Spanish–American War in 1898.[10] Most activists supported the war itself but opposed the annexation of new territory, especially the Philippines.[11] The Anti-Imperialist League was founded on June 15, 1898 in Boston, in opposition of the acquisition of the Philippines, which happened anyway. The anti-imperialists opposed the expansion because they believed imperialism violated the credo of republicanism, especially the need for "consent of the governed."

Appalled by American imperialism, the Anti-Imperialist League, which included famous citizens such as Andrew Carnegie and William James, formed a platform which stated

We hold that the policy known as imperialism is hostile to liberty and tends toward militarism, an evil from which it has been our glory to be free. We regret that it has become necessary in the land of Washington and Lincoln to reaffirm that all men, of whatever race or color, are entitled to life, liberty and the pursuit of happiness. We maintain that governments derive their just powers from the consent of the governed. We insist that the subjugation of any people is "criminal aggression" and open disloyalty to the distinctive principles of our Government...

We cordially invite the cooperation of all men and women who remain loyal to the Declaration of Independence and the Constitution of the United States.[12]

Fred Harrington states, "the anti-imperialist's did not oppose expansion because of commercial, religious, constitutional, or humanitarian reasons but instead because they thought that an imperialist policy ran counter to the political doctrines of the Declaration of Independence, Washington's Farewell Address, and Lincoln's Gettysburg Address".[13][14][15] 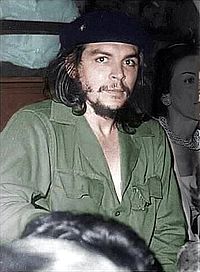 To the Latin-American revolutionary Ché Guevara, imperialism was a geopolitical system of control and repression, which must be understood as such in order to be defeated.

About the nature of imperialism, and how to oppose and defeat it, the revolutionary Ché Guevara said:

We must bear in mind that imperialism is a world system, the last stage of capitalism—and it must be defeated in a world confrontation. The strategic end of this struggle should be the destruction of imperialism. Our share, the responsibility of the exploited and underdeveloped of the world, is to eliminate the foundations of imperialism: our oppressed nations, from where they extract capitals, raw materials, technicians, and cheap labor, and to which they export new capitals—instruments of domination—arms and all kinds of articles; thus submerging us in an absolute dependence. 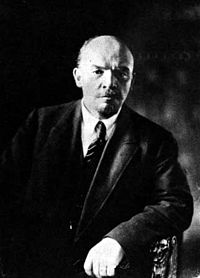 To the Russian revolutionary Lenin, imperialism was the highest, but degenerate, stage of capitalism.

In the mid-19th century, in Das Kapital (1867–94), Karl Marx mentioned imperialism to be part of the prehistory of the capitalist mode of production. Much more important was Lenin, who defined imperialism as "the highest stage of capitalism", the economic stage in which monopoly finance capital becomes the dominant application of capital.[17] As such, said financial and economic circumstances impelled national governments and private business corporations to world-wide competition for control of natural resources and human labour by means of colonialism.[18]

The Leninist views of imperialism, and related theories, such as dependency theory, address the economic dominance and exploitation of a country, rather than the military and the political dominance of a people, their country, and its natural resources. Hence, the primary purpose of imperialism is economic exploitation, rather than mere control of either a country or of a region. The Marxist and the Leninist denotation thus differs from the usual political-science denotation of imperialism as the direct control (intervention, occupation, and rule) characteristic of colonial and neo-colonial empires, as used in the realm of international relations.[19][20]

In Imperialism, the Highest Stage of Capitalism (1917), Lenin outlined the five features of capitalist development that lead to imperialism:

Generally, the relationship among Marxists and radical, left-wing organisations who are anti-war, often involves persuading such political activists to progress from pacifism to anti-imperialism—that is, to progress from the opposition of war, in general, to the condemnation of the capitalist economic system, in particular.[22]

In the 20th century, the USSR represented themselves as the foremost enemy of imperialism, and thus politically and materially supported Third World revolutionary organisations who fought for national independence. The USSR sent military advisors to Ethiopia, Angola, Egypt, and Afghanistan. Nonetheless, the USSR behaved as an imperialist power when it asserted sphere-of-influence dominance upon Afghanistan (1979–89) and dominated the countries of Eastern Europe, the Baltic states, and the Caucasus, as accorded in the Yalta Agreement (4–11 February 1945) during the Second World War (1939–45).

Such imperialist behaviour ideologically discredited the USSR for not abiding the principles of Marxism; alternatively, anarchists presented such Soviet imperialism as evidence that the philosophy of Marxism would not resolve and eliminate imperialism. Notably, Mao Zedong developed the theory that the USSR was a "social-imperialist" nation, a socialist people with tendencies to imperialism, an important aspect of Maoist analysis of the history of the USSR.[23] Contemporarily, the term Anti-imperialism is most commonly applied by Marxists, and political organisations of like ideologic bent, who propose anti-capitalism, present a class analysis of society, etc.[24]

Right-wing nationalists and religious fundamentalist movements that have emerged in reaction to alleged imperialism might also fall within this category; for example, Khomeinism historically derived much of its popularity from its appeal to widespread anger at American intervention or influence in Iran and the Middle East.

Antonio Negri and Michael Hardt assert that traditional anti-imperialism is no longer relevant. In the book Empire,[26] Negri and Hardt argue that imperialism is no longer the practice or domain of any one nation or state. Rather, they claim, the "Empire" is a conglomeration of all states, nations, corporations, media, popular and intellectual culture and so forth, and thus, traditional anti-imperialist methods and strategies can no longer be applied against them.