From Infogalactic: the planetary knowledge core
(Redirected from Archbishop of Milan)
Jump to: navigation, search

The Archdiocese of Milan (Italian: Arcidiocesi di Milano, Latin: Archidioecesis Mediolanensis) is a metropolitan see of the Catholic Church in Italy which covers the areas of Milan, Monza, Lecco and Varese. It has long maintained its own Latin liturgical rite, the Ambrosian rite, which is still used in most of its extension. Among its past archbishops, the better known are Saint Ambrose, Saint Charles Borromeo, and Pope Paul VI.

The Archdiocese of Milan is the metropolitan see of the ecclesiastical province of Milan, which includes the suffragan dioceses of Bergamo, Brescia, Como, Crema, Cremona, Lodi, Mantova, Pavia, and Vigevano.

Milan's Archdiocese is the largest in Europe.[1]

According to the legend, the Gospel was brought to Milan by St. Barnabas, and the first Bishop of Milan, St. Anathalon, was a disciple of that apostle. But a diocese cannot have been established there before 200, and possibly not until much later, for the list of the bishops of Milan names only five predecessors of Mirocles, who participated at the Lateran council held in 313 in Rome. During the persecutions of the third and early fourth century, several Christians suffered martyrdom and were venerated at Milan: among them Gervasius and Protasius (first persecution of Diocletian), Victor, Nabor and Felix, and Nazarius and Celsus. The persecutions ended in 313 when the Emperors Constantine I and Licinius issued the Edict of Milan which proclaimed the religious toleration in the Roman Empire.

Historically the Milanese church has been in full communion with the Papacy. Among its bishops should be named Eustorgius I and Dionysius, who firmly opposed apostasy imposed by the Roman Emperor Constantius II. Dionysus was exiled to Cappadocia (355), while the Romans put Auxentius on the episcopal throne of Milan. At the death of Auxentius, the great Saint Ambrose was elected bishop by the people of Milan (374-97). Among his successors, Simplicianus, Senator and Dacius (530-52), who lived almost always in exile at Constantinople on account of the Gothic War.

During the Lombards invasion many things happened to the church in Milan. The Schism of the Three Chapters guaranteed autonomy of the Milanese Church for 38 years, since the Lombards were enemies of the Byzantines. At the siege of Milan by the Lombard Alboin, the Bishop Honoratus (568) sought refuge in Genoa, with a great number of his clergy, which returned to Milan only 70 years later under John the Good.

In the 10th-century the archbishops of Milan became feudatory of the Emperor extending his jurisdiction to all North-West Italy. The most distinguished of these was Ariberto da Intimiano (1018–45). As the power of the burghers grew, that of the archbishops waned, and with it the imperial authority which the prelate represented, and since the 12th century Milan became a Guelph town who fought the Emperor.[2] The archbishop Ottone Visconti in the 13th-century caused himself to be proclaimed perpetual lord, thus putting an end to the Republic of Milan and establishing the power of the House of Visconti who ruled the Duchy of Milan from 1277 to 1447.

The figure who marked the modern history of the church of Milan was Saint Charles Borromeo, archbishop of Milan from 1564 to 1584, who was a leading figure during the Counter-Reformation and was responsible for significant reforms in the Catholic Church. His pastoral efforts were followed also by his successors, such as Federico Borromeo (died 1631) and Giuseppe Pozzobonelli (died 1783).

As of September 2012, the current Metropolitan Archbishop of Milan is Cardinal Angelo Scola, who has been serving since his appointment by Pope Benedict XVI on June 11, 2011, having served previously as the Cardinal Patriarch of the Roman Catholic Archdiocese of Venice in Venice, Italy. Cardinal Scola had succeeded the retiring Cardinal Dionigi Tettamanzi, who had been in office since 2002 and had been a possible papabile.

The Seminary of the archdiocese has the principal see in Venegono Inferiore. The minor seminary is located in Seveso.

A list of the bishops and archbishops of Milan is engraved in plaque in the South nave of the Cathedral of Milan, but such list contains some historical errors. The data here below follow the work of Eugenio Cazzani.[3] 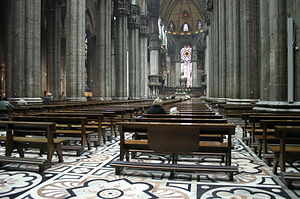 Inside view of the Duomo di Milano.