From Infogalactic: the planetary knowledge core
Jump to: navigation, search
For other uses, see Visconti.

Visconti is the family name of two important Italian noble dynasties of the Middle Ages. There are two distinct Visconti families: The first one (chronologically) in the Republic of Pisa in the mid twelfth century who achieved prominence first in Pisa, then in Sardinia where they became rulers of Gallura. The second rose to power in Milan, where they ruled from 1277 to 1447 and where several collateral branches still exist. The renowned director Luchino Visconti is a scion of the family.

The Visconti of Gallura used a cock as their symbol (Gallura meaning 'land of cocks'), whereas the later Visconti of Milan used a biscione (a great serpent) swallowing a Saracen, or, according to another version, on the contrary giving life to a child. This symbol is still closely connected with Milan.

Any link between the two families in Pisa-Gallura and Milan has yet to be proven.

Visconti of Pisa and Sardinia 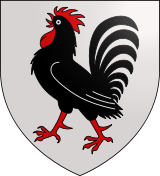 Coat of Arms of the Visconti of Gallura depicting a cock

The first Visconti of note in Pisa was Alberto, who bore the title patrician. Alberto's son, Eldizio, bore the titles patrician and consul from 1184 to 1185. It was Eldizio's sons, Lamberto and Ubaldo I, who brought the family to the height of its influence in Pisa and Sardinia. Both of them carried the title of patrician and each served a term as podestà.

In 1212 various factions, pro- and anti-Visconti clashed for control over Pisa. In mid-January 1213, William I of Cagliari led a coalition of anti-Visconti forces to victory in battle near Massa over the combined forces of Lucca and the Visconti under Ubaldo. Afterward, Pisa divided power between four rectores, one of which was a Visconti. The Visconti of Sardinia continued to take a part in Pisan politics to the end of the century, but their influence there was greatly diminished after 1213.

In Sardinia Eldizio had married a daughter of Torchitorio III of Cagliari, who became the mother of Lamberto and Ubaldo. In 1207, Lamberto married Elena, the heiress of Barisone II of Gallura, thus securing control over the northeastern corner of Sardinia with his capital at Civita. In 1215, he and Ubaldo established their hegemony over the Giudicato of Cagliari in the south of the island as well. Through advantageous marriages, Lamberto's son, Ubaldo II, secured power in Logudoro for a time. By mid century, Pisan authority was unopposed in Sardinia thanks to intermarriages between the Visconti family and the other great families of Pisa (Gherardeschi and Capraia) and Sardinia (Lacon and Bas-Serra). 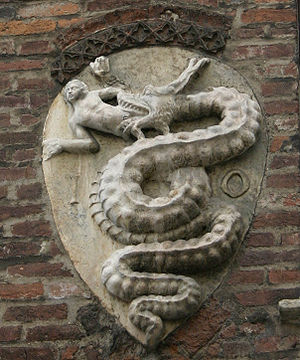 Depiction of the Biscione swallowing the child, coat of arms of the House of Visconti, on the Archbishops' palace in Piazza Duomo, in Milan, Italy.

The effective founder of the Visconti of Milan, Ottone, wrested control of the city from the rival Della Torre family in 1277.[1]

The family loved to claim legendary versions about its origins (fancy genealogies were en vogue at the time), while established facts reflect quite sober and almost humble beginnings. The branch of the Visconti family that came to rule Milan was originally entrusted with the lordship of Massino (nowadays Massino Visconti), a village above Lago Maggiore, which they controlled from the twelfth century.

It is said that the Milanese Visconti had their origins in a family of capitanei (cfr. the modern surname Cattaneo) whom archbishop Landulf of Milan (978–998) had granted certain feudal holdings known as caput plebis (at the head, likely in geographical and not hierarchical sense, of the pieve, an ecclesiastical lesser subdivision). A document from the year 1157 says the Visconti were holders of the captaincy of Marliano (today Mariano Comense); late chronicler Galvano Fiamma confirms this version. Decades before that, before 1070, they had gained the title of viscount to be later inherited down the male line (Biscaro, ASL, "I maggiori dei Visconti di Milano"). The family dispersed into several branches, some of which were entrusted fiefs far off from the Lombard metropolis; the one which gave the Medieval lords of Milan is said to be descended from Umberto (d. in the first half of the 12th century).

The Visconti ruled Milan until the early Renaissance, first as Lords, then, from 1395, with the mighty Gian Galeazzo who endeavored to unify Northern Italy and Tuscany, as Dukes. Visconti rule in Milan ended with the death of Filippo Maria Visconti in 1447. He was succeeded by a short-lived republic and then by his son-in-law Francesco I Sforza, who established the reign of the House of Sforza.[2][3]

From Uberto, brother of Matteo I, came the lateral branch of Dukes of Modrone. To this family belonged Luchino Visconti, one of the most prominent film directors of Italian neorealist cinema.