Assyrian/Chaldean/Syriac Americans may refer to people born in or residing in the United States of full or partial Assyrian origin.

The United States constitutes the largest population of Assyrian/Chaldean/Syriac people in the Assyrian diaspora. They are an Eastern Aramaic speaking Christian ethnic group who descend from the ancient Assyrians.

Assyrians have been present in the United States since the late 19th century. The first Assyrians who came to the United States were young men who were sent by Western missionaries to be trained for mission work in their native countries.[5] They traveled in small groups and emigrated from what are present-day northern Iraq, southeastern Turkey, northeastern Syria and northwestern Iran from 1914-1920 due to the Assyrian Genocide and subsequent Assyrian war of independence.

Following those years, the Assyrian immigration increased dramatically due to other conflicts in the Middle East and still increases due to the Iraq War. The United States is home to the third largest Assyrian community in the world. The 2000 U.S. census counted 82,355 Assyrians/Chaldeans/Syriacs in the country,[6] of whom 42% (34,484) lived in Michigan. The Assyrian/Chaldean/Syriac organizations claim that their population in 2010 is around 400,000 [7] The highest concentrations are located in Detroit and Chicago. In 2005, the first Assyrian school in the United States, the Assyrian American Christian School, opened in Tarzana, Los Angeles.

As of 2007 Metro Detroit had around 100,000 Assyrian people of various religious denominations. Within California, most Assyrians reside in the cities of San Francisco, San Diego, Los Angeles, and Turlock. Other regions with prominent communities are the states of Illinois and Arizona.[8] 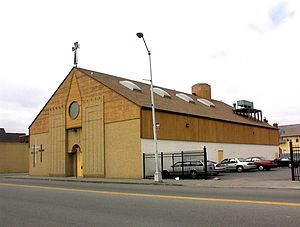 Chaldean Catholic Church in Detroit Chaldean Christians immigration, mainly to Detroit, Michigan began in the early 20th century. The first reported Assyrian who immigrated to the United States was Zia Attala, who was a hotel owner in Philadelphia, Pennsylvania.[citation needed]

Assyrian Chaldean Christians immigration, mainly to Detroit, Michigan began in the early 20th century. The first reported Assyrian who immigrated to the United States was Zia Attala, who was a hotel owner in Philadelphia, Pennsylvania.[citation needed]

Before the 1970s, Assyrians-Chaldeans came to the United States in search of greater economic opportunities. After the 1970s, many Assyrians fled for political freedom, especially after the rise of Saddam Hussein and, after the Persian Gulf War. Some were drawn by the economic opportunities they had seen successfully affect their family members who had already immigrated. Less stringent immigration laws during the 1960s and 1970s facilitated increasing numbers, with the 1970s seeing the highest number of Assyrians coming to the United States. Assyrian immigrants were initially drawn by the potential employment at the Ford Motor Company River Rouge in Detroit. In 1962, the number of Assyrian owned grocery stores was 120, but grew to 278 in 1972. The main cause of this were the 1967 Detroit riots, after which Jewish grocery store owners left the area and left the opportunity open for Assyrians to take over. Often these Jews sold their old stores to Assyrians.[9]

The largest Assyrian-Chaldean diaspora is located in Metropolitan Detroit, where there are an estimated 121,000 members.[10] These cities include, but are not limited to, Detroit, Southfield, Sterling Heights, Oak Park, Troy, West Bloomfield,Commerce, Walled Lake, Rochester Hills, Shelby TWP, Macomb TWP Farmington Hills, Ferndale, Warren, Bloomfield Hills and Ann Arbor. More and more Assyrians-Chaldeans, as they establish themselves financially, quickly move out of Detroit and into the other locations, including San Diego and cities in Arizona.

Mostly all new Chaldean Catholic immigrants and low-income senior citizens tend to reside in Detroit, in the 7 Mile Road between Woodward Avenue and John R Street. This area was officially named Chaldean Town in 1999.[11]

There are eight Chaldean Catholic churches in Metropolitan Detroit, located in West Bloomfield, Troy (where there are two), Oak Park, Southfield, Warren, Sterling Heights and Detroit.

Iraqi president Saddam Hussein donated hundreds of thousands of dollars to Chaldean Catholic churches in Detroit and received a key to the city in the 1980s on behalf of mayor Coleman Young, when the Baath regime was an ally of the United States government.[12]

Saddam's bond with Detroit started in 1979, when the Reverend Jacob Yasso of the Sacred Heart Chaldean Church (Aramaic: ܥܕܬܐ ܕܠܒܗ ܕܡܪܢ ܕܟܠܕܝ̈ܐ‎ ʿēttāʾ d-lebbēh d-māran d-ḵaldāyēʾ) congratulated Saddam on his presidency. In return, Yasso's church received 250,000 dollars. The money reportedly helped build the Chaldean Center of America located on Seven Mile Road next to the Sacred Heart Chaldean Church, which received an earlier Saddam gift of $250,000, the station reported.[13] More Iraqi money reportedly went to other churches around Detroit and around the country.[citation needed]

After World War II several Assyrian men who had been educated in Iraq by American Jesuits traveled to the United States. They were to teach Arabic to U.S. officers at the Army Language School who were going to be stationed in the Middle East. The men started the San Diego-area Chaldean Catholic community. Yasmeen S. Hanoosh, author of The Politics of Minority Chaldeans Between Iraq and America, wrote that the Chaldo-Assyrians in San Diego "continued to grow in relative isolation from the family-chain-migration based communities in and around Michigan."[14]

The U.S. federal government took the word Syrian to mean Arabs from Syria and not as one of the terms to identify the ethnically distinct Assyrians, although the terms Syrian and Syriac are accepted by mainstream majority academic opoinion to be etymologically derivative of the term Assyrian,[15][16] and historically meant Assyrian. The Syriac Orthodox Church was previously known as the Syrian Orthodox Church until a Holy Synod in 2000 voted to change it to Syriac, thus distinguishing from the Arabs. Mor Cyril Aphrem Karim wrote a letter to the Syriacs in 2000 urging them to register in the census as Syriac with a C, and not Syrian with an N to distinguish the group. He also urged them not to register as the country of origin.[17] On the U.S. census, there is a section for the Assyrian/Chaldean/Syriacs, which is listed separately from Syrian, Syrian being a subcategory for Arab. [18]

According to the 2011 American Community Survey 1-Year Estimates there are 110,807 Assyrian/Chaldean/Syriac people in the United States.[1][3]