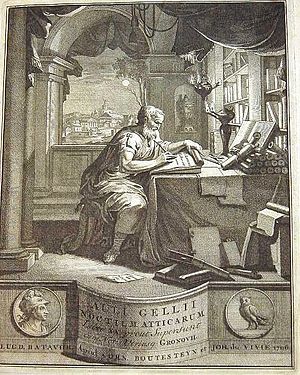 Aulus Gellius (c. 125 – after 180 AD) was a Latin author and grammarian, who was probably born and certainly brought up in Rome. He was educated in Athens, after which he returned to Rome, where he held a judicial office. He is famous for his Attic Nights, a commonplace book, or compilation of notes on grammar, philosophy, history, antiquarianism and other subjects, preserving fragments of many authors and works who otherwise might be unknown today.

The only source for the life of Aulus Gellius are the details recorded in his writings.[1] He was of good family and connections, possibly of African origin,[2] but he was probably born and certainly brought up in Rome. He traveled much, especially in Greece, and resided for a considerable period in Athens.[1] He studied rhetoric under Titus Castricius and Sulpicius Apollinaris; philosophy under de (Calvisius Taurus) and Peregrinus Proteus; and enjoyed also the friendship and instruction of Favorinus, Herodes Atticus, and Fronto.[1]

He returned to Rome, where he held a judicial office.[3] He was appointed by the praetor to act as an umpire in civil causes, and much of the time which he would gladly have devoted to literary pursuits was consequently occupied by judicial duties.[1] The precise date of his birth, as of his death, is unknown; but from the names of his teachers and companions, he must have lived under Hadrian, Antoninus Pius, and Marcus Aurelius.[1]

His only known work, the Attic Nights (Latin: Noctes Atticae), takes its name from having been begun during the long nights of a winter which he spent in Attica.[3] He afterwards continued it in Rome.[3] It is compiled out of an Adversaria, or commonplace book, in which he had jotted down everything of unusual interest that he heard in conversation or read in books, and it comprises notes on grammar, geometry, philosophy, history and many other subjects.[3] One story is the fable of Androcles, which is often included in compilations of Aesop's fables, but was not originally from that source.

The work, deliberately devoid of sequence or arrangement, is divided into twenty books.[3] All these have come down to us except the eighth, of which nothing remains but the index.[3] The Attic Nights are valuable for the insight they afford into the nature of the society and pursuits of those times, and for its many excerpts from works of lost ancient authors.[3]

The editio princeps appeared at Rome in 1469. The earliest critical edition is that of Jakob Gronovius (Leyden, 1706). A later edition is that of M. Hertz (Berlin, 1883–85; there is also a smaller edition by the same author, Berlin, 1886), revised by C. Hosius, 1903, with bibliography. A volume of selections, with notes and vocabulary, was published by Nall (London, 1888). There is an English translation by W. Beloe (London, 1795), and a French translation (1896).[3][4] A more recent English translation is by John Carew Rolfe (1927) for the Loeb Classical Library.