Project Gutenberg (PG) is a volunteer effort to digitize and archive cultural works, to "encourage the creation and distribution of eBooks".[3] It was founded in 1971 by Michael S. Hart and is the oldest digital library.[4] Most of the items in its collection are the full texts of public domain books. The project tries to make these as free as possible, in long-lasting, open formats that can be used on almost any computer. As of 3 October 2015[update], Project Gutenberg reached 50,000 items in its collection.[5]

The releases are available in plain text but, wherever possible, other formats are included, such as HTML, PDF, EPUB, MOBI, and Plucker. Most releases are in the English language, but many non-English works are also available. There are multiple affiliated projects that are providing additional content, including regional and language-specific works. Project Gutenberg is also closely affiliated with Distributed Proofreaders, an Internet-based community for proofreading scanned texts. 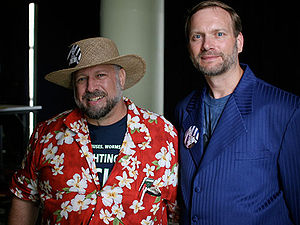 Project Gutenberg was started by Michael Hart in 1971 with the digitization of the United States Declaration of Independence.[6] Hart, a student at the University of Illinois, obtained access to a Xerox Sigma V mainframe computer in the university's Materials Research Lab. Through friendly operators, he received an account with a virtually unlimited amount of computer time; its value at that time has since been variously estimated at $100,000 or $100,000,000.[7] Hart has said he wanted to "give back" this gift by doing something that could be considered to be of great value. His initial goal was to make the 10,000 most consulted books available to the public at little or no charge, and to do so by the end of the 20th century.[8]

This particular computer was one of the 15 nodes on ARPANET, the computer network that would become the Internet. Hart believed that computers would one day be accessible to the general public and decided to make works of literature available in electronic form for free. He used a copy of the United States Declaration of Independence in his backpack, and this became the first Project Gutenberg e-text. He named the project after Johannes Gutenberg, the fifteenth century German printer who propelled the movable type printing press revolution.

By the mid-1990s, Hart was running Project Gutenberg from Illinois Benedictine College. More volunteers had joined the effort. All of the text was entered manually until 1989 when image scanners and optical character recognition software improved and became more widely available, which made book scanning more feasible.[9] Hart later came to an arrangement with Carnegie Mellon University, which agreed to administer Project Gutenberg's finances. As the volume of e-texts increased, volunteers began to take over the project's day-to-day operations that Hart had run.

Starting in 2004, an improved online catalog made Project Gutenberg content easier to browse, access and hyperlink. Project Gutenberg is now hosted by ibiblio at the University of North Carolina at Chapel Hill.

Italian volunteer Pietro Di Miceli developed and administered the first Project Gutenberg website and started the development of the Project online Catalog. In his ten years in this role (1994–2004), the Project web pages won a number of awards, often being featured in "best of the Web" listings, and contributing to the project's popularity.[10]

Also in 2000, Charles Franks founded Distributed Proofreaders (DP), which allowed the proofreading of scanned texts to be distributed among many volunteers over the Internet. This effort greatly increased the number and variety of texts being added to Project Gutenberg, as well as making it easier for new volunteers to start contributing. DP became officially affiliated with Project Gutenberg in 2002.[13] As of 2007[update], the 10,000+ DP-contributed books comprised almost a third of the nearly 50,000[2] books in Project Gutenberg.

There have been many instances of Gutenberg books being sold for profit in the Kindle Store, one being the reselling of the 1906 book Fox Trapping.[14] The books may not have been altered save the stripping of the Project Gutenberg ("PG") terms & conditions, which is specified by PG when content is used elsewhere,[15] and possibly slight formatting changes. There is no legal impediment to the reselling of works in the public domain, but there exists a debate as to the appropriateness of simply reusing content that is created by volunteers, without sufficient modification. The debate questions sellers who take the PG editions without reformatting to include a linked table of contents, or without repackaging, re-editing, or reinterpretation of the data. Factors in the debate include whether or not the features of the Amazon platform render it accessible to a larger community of readers on a greater variety of devices, or if the users of the Amazon platform are essentially "locked in" by the Kindle's platform-specific content.

In August 2003, Project Gutenberg created a CD containing approximately 600 of the "best" e-books from the collection. The CD is available for download as an ISO image. When users are unable to download the CD, they can request to have a copy sent to them, free of charge.

In December 2003, a DVD was created containing nearly 10,000 items. At the time, this almost represented the entire collection. In early 2004, the DVD also became available by mail.

The majority of the DVDs, and all of the CDs mailed by the project, were recorded on recordable media by volunteers. However, the new dual layer DVDs were manufactured, as it proved more economical than having volunteers burn them. As of October 2010[update], the project has mailed approximately 40,000 discs.[16] 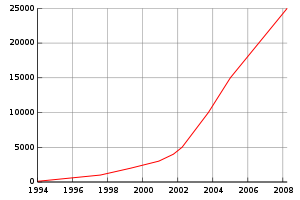 Growth of Project Gutenberg publications from 1994 until 2008.

As of August 2015[update], Project Gutenberg claimed over 50,000[2] items in its collection, with an average of over fifty new e-books being added each week.[17] These are primarily works of literature from the Western cultural tradition. In addition to literature such as novels, poetry, short stories and drama, Project Gutenberg also has cookbooks, reference works and issues of periodicals.[18] The Project Gutenberg collection also has a few non-text items such as audio files and music notation files.[19]

Most releases are in English, but there are also significant numbers in many other languages. As of February 2013[update], the non-English languages most represented are: French, German, Finnish, Dutch, Portuguese, and Chinese.[4]

Whenever possible, Gutenberg releases are available in plain text, mainly using US-ASCII character encoding but frequently extended to ISO-8859-1 (needed to represent accented characters in French and Scharfes s in German, for example). Besides being copyright-free, the requirement for a Latin (character set) text version of the release has been a criterion of Michael Hart's since the founding of Project Gutenberg, as he believes this is the format most likely to be readable in the extended future.[20] Out of necessity, this criterion has had to be extended further for the sizable collection of texts in East Asian languages such as Chinese and Japanese now in the collection, where UTF-8 is used instead.

Other formats may be released as well when submitted by volunteers. The most common non-ASCII format is HTML, which allows markup and illustrations to be included. Some project members and users have requested more advanced formats, believing them to be much easier to read. But some formats that are not easily editable, such as PDF, are generally not considered to fit in with the goals of Project Gutenberg. Also Project Gutenberg has two options for master formats which can be submitted (from which all other files are generated), customized versions of the Text Encoding Initiative standard since 2005,[21] and reStructuredText, since 2011.[22]

Michael Hart said in 2004, "The mission of Project Gutenberg is simple: 'To encourage the creation and distribution of ebooks'".[3] His goal was, "to provide as many e-books in as many formats as possible for the entire world to read in as many languages as possible".[4] Likewise, a project slogan is to "break down the bars of ignorance and illiteracy",[24] because its volunteers aim to continue spreading public literacy and appreciation for the literary heritage just as public libraries began to do in the late 19th century.[25][26]

Project Gutenberg is intentionally decentralized. For example, there is no selection policy dictating what texts to add. Instead, individual volunteers work on what they are interested in, or have available. The Project Gutenberg collection is intended to preserve items for the long term, so they cannot be lost by any one localized accident. In an effort to ensure this, the entire collection is backed-up regularly and mirrored on servers in many different locations.[27]

Project Gutenberg is careful to verify the status of its ebooks according to U.S. copyright law. Material is added to the Project Gutenberg archive only after it has received a copyright clearance, and records of these clearances are saved for future reference. Project Gutenberg does not claim new copyright on titles it publishes. Instead, it encourages their free reproduction and distribution.[4]

Most books in the Project Gutenberg collection are distributed as public domain under U.S. copyright law. The licensing included with each ebook puts some restrictions on what can be done with the texts (such as distributing them in modified form, or for commercial purposes) as long as the Project Gutenberg trademark is used. If the header is stripped and the trademark not used, then the public domain texts can be reused without any restrictions.

There are also a few copyrighted texts, like of science fiction author Cory Doctorow, that Project Gutenberg distributes with permission. These are subject to further restrictions as specified by the copyright holder, although they generally tend to be licensed under Creative Commons.

The text files use the legacy format of plain ASCII, wrapped at 65–70 characters, with paragraphs separated by a double-line break. In recent decades the resulting relatively bland appearance and the lack of a markup possibility have often been perceived as a drawback of this format.[28][dubious – discuss] Project Gutenberg attempts to address this by making many texts available in HTML, ePub, and PDF versions as well, but faithful to the mission of offering data which is easy to handle with computer code, plain ASCII text remains the most important format, and the ePub version still contains extra line breaks between paragraphs.

In December 1994, Project Gutenberg was criticized by the Text Encoding Initiative for failing to include apparatus (documentation) of the decisions unavoidable in preparing a text, or in some cases, documenting which of several (conflicting) versions of a text has been the one digitized.[29]

The selection of works (and editions) available has been determined by popularity, ease of scanning, being out of copyright, and other factors; this would be difficult to avoid in any crowd-sourced project.[30]

In March 2004, a new initiative was begun by Michael Hart and John S. Guagliardo[31] to provide low-cost intellectual properties. The initial name for this project was Project Gutenberg 2 (PG II), which created controversy among PG volunteers because of the re-use of the project's trademarked name for a commercial venture.[12]

All affiliated projects are independent organizations which share the same ideals, and have been given permission to use the Project Gutenberg trademark. They often have a particular national, or linguistic focus.[32]

This audio file was created from a revision of the "Project Gutenberg" article dated 23 July 2007, and does not reflect subsequent edits to the article. (Audio help)
More spoken articles
Retrieved from "https://infogalactic.com/w/index.php?title=Project_Gutenberg&oldid=15231"
Categories:
Hidden categories: