The Bürgerbräukeller was a large beer hall located in Munich, Germany. Opened in 1885, it was one of the largest beer halls of the Bürgerliches Brauhaus company, a 19th-century brewery. After Bürgerliches merged with Löwenbräu in 1921, the hall was transferred to that company.[1]

The Bürgerbräukeller was the location from which Adolf Hitler launched the Beer Hall Putsch in November 1923; sixteen years later, in 1939, the building was the location of the attempted assassination of Hitler and other Nazi leaders by Georg Elser. It survived aerial bombing in World War 2.

The Bürgerbräukeller was demolished in 1979,[2] the Gasteig complex being built on its site.

The Bürgerbräukeller was located in the Haidhausen district of Munich on the east side of the Isar River. The entrance was from Rosenheimer Street, with rear access from Keller Street. Since 1980, the site has been redeveloped with the construction of the Gasteig Culture Centre, the Hilton Munich City Hotel and the headquarters of GEMA.[3]

As early as the 16th century, brewers in Bavaria would collect the barrels of beer near the end of the brewing season and stock them in specially developed cellars for the summer. By the 18th century, brewers discovered they could make a greater profit if they opened their garden-topped cellars to the public and served the beer on site.[4] In the 20th century, the Bürgerbräukeller had both a cellar and a beer garden, as well as the grand hall for indoor functions.[5]

The grand hall was a rectangular space accommodating up to 3,000 people, though less in full dining mode. Freestanding pillars on either side of the hall supported narrow galleries and the roof. The load-bearing walls and the internal pillars with classical capitals were plastered brickwork. A decorative plastered ceiling, divided into bays with three rows of chandeliers, concealed steel beams supporting the timber roof structure.

File:Hitlerplakat27.02.25.jpg
Invitation to a "re-establishment" of the Nazi party with Adolf Hitler as an orator, 27 February 1925, Munich, Bürgerbräukeller 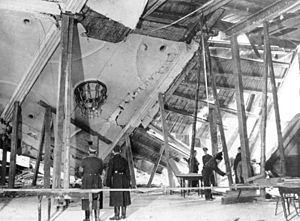 Bürgerbräukeller after the 1939 assassination attempt

From 1920 to 1923, the Bürgerbräukeller was one of the main gathering places of the Nazi party. There, on 8 November 1923, Adolf Hitler launched the Beer Hall Putsch. After Hitler seized power in 1933, he commemorated each anniversary on the night of 8 November with an address to the Alte Kämpfer (Old Fighters) in the great hall of the Bürgerbräukeller. The following day, a re-enactment was conducted of the march through the streets of Munich from the Bürgerbräukeller to Königsplatz. The event climaxed with a ceremony at the Feldherrnhalle to revere the 16 'blood martyrs' of the Beer Hall Putsch.[6]

In 1939, a time bomb concealed inside a pillar in the Bürgerbräukeller was set to go off during Hitler's Beer Hall Putsch address on 8 November. The bomb exploded, killing eight people and injuring 57,[7] but Hitler had cut short his speech and had already left. A Swabian German, Georg Elser, was arrested, imprisoned for 5 ½ years, and executed shortly before the end of the war.[8]

The building suffered severe structural damage from Elser's bomb, and in subsequent years, 1940-1943, the Beer Hall Putsch address was held at the Löwenbräukeller at Stiglmaierplatz,[9] and in 1944 at the Circus Krone Building.

After the attempted assassination of Hitler on 8 November 1939, repairs began on the Bürgerbräukeller with the intention of repairing the building to its original state. However, due to the shortage of materials, work was never completed. During the Allied aerial bombing of Munich, a single bomb hit the hall where the 1939 explosion had taken place, but failed to explode.[10]

The Bürgerbräukeller served as an American Red Cross Club starting in late 1945 and became a Special Services club in September 1947. An average of 1,700 servicemen made use of the various facilities of the club every day. The Bürgerbräukeller was one of nine service clubs in the Munich Military Post.[12]

With the departure of American forces in 1957, the Bürgerbräukeller was taken over by the Lowenbrau Beer Company, and after partial rebuilding, was reopened as a bierkeller at Christmas, 1958.[13]

In preparation for the 1972 Olympic Games in Munich, the city authorities undertook the construction of an underground railway system. The construction of station escalators emerging on Rosenheimerstrasse, next to the Bürgerbräukeller, required the cellar, which had been used for Nazi Party meetings, to be sealed off. In 1976, the great hall at the rear was still available for large gatherings.[14]

In the 1970's it was in use also as a recording studio, Carlos Kleiber's La Traviata being recorded there in 1976.

The Bürgerbräukeller was demolished in 1979 in a redevelopment programme, as were the nearby Münchner-Kindl-Keller and the Hofbräu brewery.

On the Bürgerbräukeller site now stands the GEMA building, the Gasteig Cultural Centre, and the Munich City Hilton Hotel.

Near the entrance to the GEMA building, a plaque in the paving marks the position of the pillar that concealed Georg Elser's bomb in his attempt to assassinate Adolf Hitler.[15]