From Infogalactic: the planetary knowledge core
Jump to: navigation, search
This article is about the Soviet computer. For the roleplaying system, see Big Eyes Small Mouth. 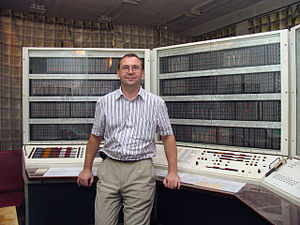 BESM (БЭСМ) is the name of a series of Soviet mainframe computers built in 1950–60s. The name is an acronym for "Bolshaya Elektronno-Schetnaya Mashina" ("Большая Электронно-Счётная Машина"), literally "Large Electronically Computing Machine". The series began as a successor to MESM ("Malaya Elektronno-Schetnaya Mashina", "Small Electronically Computing Machine"). MESM was built between 1948 and 1951 and was one of the first electronic computers produced in continental Europe.

BESM-1, originally referred to as simply the BESM or BESM AN ("BESM Akademii Nauk", BESM of the Academy of Sciences), was completed in 1952. Only one BESM-1 machine was built. The machine used approximately 5,000 vacuum tubes. At the time of completion, it was the fastest computer in Europe. The floating point numbers were represented as 39-bit words: 32 bits for the numeric part, one bit for sign, and 1 + 5 bits for the exponent. It was capable of representing numbers in the range 10−9 – 1010. BESM-1 had 1024 words of read/write memory using ferrite cores, and 1024 words of read-only memory based on semiconducting diodes. It also had external storage: 4 magnetic tape units of 30,000 words each, and fast magnetic drum storage with a capacity of 5120 words and an access rate of 800 words/second. The computer was capable of performing 8–10 KFlops. The energy consumption was approximately 30 kW, not accounting for the cooling systems.

BESM-3M and BESM-4 were built using transistors. Their architecture was similar to that of the M-20 and M-220 series. The word size was 45 bits. Thirty BESM-4 machines were built. BESM-4 was used to create the first ever computer animation.[1][2][3]

EPSILON (a macro language with high level features including strings and lists, developed by Andrey Ershov at Novosibirsk in 1967) was used to implement ALGOL 68 on the M-220.[4]

The BESM-6 was arguably the most well-known and influential model of the series designed at the Institute of Precision Mechanics and Computer Engineering. The design was completed in 1965. Production started in 1968 and continued for the following 19 years.[5]

Like its predecessors, the original BESM-6 was transistor-based (however, the version used in the 1980s as a component of the Elbrus supercomputer was built with integrated circuits). The machine's 48-bit processor ran at 10 MHz clock speed and featured two instruction pipelines, separate for the control and arithmetic units, and a data cache of 16 48-bit words. The system achieved performance of 1 MFlops. The fastest supercomputer at the time, the CDC 6600, achieved 3 MFlops utilizing one central and ten peripheral processing units.

The BESM-6 was widely used in USSR in the 1970s for various computation and control tasks. During the 1975 Apollo-Soyuz Test Project the processing of Soyuz orbit parameters was accomplished by a BESM-6 based system in 1 minute. The same computation for the Apollo was carried out by the American side in 30 minutes.[6]

A total of 355 of these machines were built. Production ended in 1987.

As the first Soviet computer with an installed base that was large for the time, the BESM-6 gathered a dedicated developer community. Over the years several operating systems and compilers for programming languages such as Fortran, ALGOL and Pascal were developed.[7]

A modification of the BESM-6 based on integrated circuits, with 2-3 times higher performance than the original machine, was produced in the 1980s under the name Elbrus-1K2 as a component of the Elbrus supercomputer.