This article is about the 1780 battle. For the 1781 battle known as the Second Battle of Camden see Battle of Hobkirk's Hill.

The Battle of Camden was a major victory for the British in the Southern theater of the American Revolutionary War (American War of Independence). On August 16, 1780, British forces under Lieutenant General Charles, Lord Cornwallis routed the American forces of Major General Horatio Gates about 10 km (five miles) north of Camden, South Carolina, strengthening the British hold on the Carolinas following the capture of Charleston.

The rout was a humiliating defeat for Gates, the American general best known for commanding the Americans at the British defeat of Saratoga, whose army had possessed a large numerical superiority over the British force. Following the battle, he never held a field command again. His political connections, however, helped him avoid inquiries and courts martial into the debacle.

Following the British defeat at Saratoga in 1777 and French entry into the American Revolutionary War in early 1778, the British decided to renew a "southern strategy" to win back their rebellious North American colonies. This campaign began in December 1778 with the capture of Savannah, Georgia, and gained further ground in January 1780, when General Sir Henry Clinton led an army and captured Charleston, South Carolina. Clinton returned to New York in the summer of 1780, leaving Lord Cornwallis the task of fortifying the South and raising the anticipated large numbers of Loyalists. The Continental Army in the south, most of which had surrendered at Charleston, was completely driven from South Carolina in the May 1780 Battle of Waxhaws.

The Patriot resistance remaining in South Carolina consisted of militia partisan companies under commanders like Thomas Sumter, William Davie, and Francis Marion. The Continental Army began to reform at Charlotte, North Carolina under Horatio Gates, the "hero of Saratoga". Gates arrived in late July, and met with the local militia and Continental Army commanders. Against the advice of council, Gates, even before he knew the full capabilities of the troops under his command, ordered a march into South Carolina through an area he had been advised had strong Loyalist tendencies. A significant number of his troops were relatively untested militia companies, and even some of the Continentals under his command had little battlefield experience.

Because of its crossroads location, Camden was considered a key to controlling the back country of the Carolinas. On July 27, Gates advanced into South Carolina, heading towards Camden, then garrisoned by about 1,000 men under Lord Rawdon.[3] Gates established a camp at Rugeley's Mill, north of Camden, where he was joined by militia companies from North Carolina and Virginia. The weather was extremely hot, and a significant number of troops were put out of action by the heat and diseases like dysentery. Although Gates had over 4,000 men in camp, only about 2000 of them were effective for combat, in part because Gates further reduced their numbers by sending several hundred men in support of operations by Sumter and Marion, and because the night before, the men had been fed green corn, known for giving humans bowel problems.

General Cornwallis, alerted to Gates' movement on August 9, marched from Charleston with reinforcements, arriving at Camden on August 13, bringing the effective British troop strength over 2,000 men.

Gates formed up first on the field. He had about 3,700 troops, of which only 1,500 were Continental regulars. On his right flank he placed Mordecai Gist's 2nd Maryland and the Delaware Regiment {Johann de Kalb was with the Regulars}. On his left flank, he placed 2,500 untried North Carolina militia under Maj. Gen. Richard Caswell. Gates stayed with the reserve force, the 1st Maryland Regiment under William Smallwood. Gates placed seven guns along the line. Behind the militia, he placed companies of cavalry and light infantry. With this formation, though a typical British practice of the time, Gates was placing the untested militia, his weakest forces, against the most experienced British regiments, while his best troops would face only the weaker elements of the British forces.

Cornwallis had roughly 2,100 men, of which about 600 were Loyalist militia and Volunteers of Ireland. The other 1,500 were British regulars. Cornwallis also had the infamous and highly experienced Tarleton's Legion, some 250 cavalry and 200 infantry who were formidable in a pursuit situation. Cornwallis formed his army in two brigades. Lord Rawdon was in command of the left, facing the Continental Infantry with the Irish Volunteers, Banastre Tarleton's infantry and the Loyalist troops. On the right was Lt. Col James Webster, facing the inexperienced militia with the 23rd Royal Welch Fusiliers and the 33rd Regiment of Foot. In reserve, Cornwallis had two battalions of the 71st Regiment of Foot and Tarleton's cavalry force. He also placed four guns in the British centre.[3] 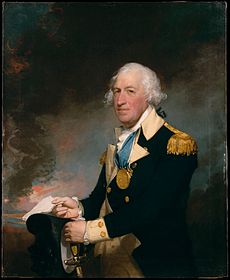 Both armies advanced at each other just after dawn. The British troops opened the battle, when the right flank fired a volley into the militia regiments, causing a significant number of casualties. They followed the volley up with a bayonet charge. The militia, lacking bayonets, panicked and fled before the British regiments even reached them. Only one company of militia managed to fire a volley before fleeing. The panic quickly spread to the North Carolina militia, and they also broke ranks and fled. Seeing his left flank collapse, Gates fled with the first of the militia to run from the field. Within a matter of minutes, the whole American left wing had evaporated. The Virginia militia ran away so quickly that they suffered only three casualties.[4]

While the militia was being routed, and before Gates' flight, he ordered his right flank under de Kalb to attack the opposing British militia forces. Rawdon's troops advanced in two charges, but a heavy fire repulsed his regiments. The Continental troops then launched a counterattack which came close to breaking Rawdon's line, which began to falter. Cornwallis rode to his left flank and steadied Rawdon's men. Instead of pursuing the fleeing militia, Webster wheeled around and launched a bayonet charge into the left flank of the Continental regiments in the center.

The North Carolina militia that had been stationed next to the Delaware regiment held its ground, the only militia unit to do so. The Continental regiments fought a stiff fight for some time, but only 800 Continentals were by this time facing over 2,000 British troops. Cornwallis, rather than fight a sustained fight with a heavy loss, ordered Tarleton's cavalry to charge the rear of the Continental line. The cavalry charge broke up the formation of the Continental troops, who finally broke and fled.

De Kalb, attempting to rally his men was shot eleven times by musket fire. After just one hour of combat, the American troops had been utterly defeated, suffering over 2,000 casualties. Tarleton's cavalry pursued and harried the retreating Continental troops for some 20 miles (32 km) before drawing rein. By that evening, Gates, mounted on a swift horse, had taken refuge 60 miles (97 km) away in Charlotte, North Carolina.[3]

The British casualties were 68 killed, 245 wounded and 11 missing.[1] Hugh Rankin says, "of the known dead, 162 were Continentals, 12 were South Carolina militiamen, 3 were Virginia militiamen and 63 were North Carolina militiamen".[5] David Ramsay says, "290 American wounded prisoners were carried into Camden after this action. Of this number, 206 were Continentals, 82 were North Carolina militia and 2 were Virginia militia. The resistance made by each corps may in some degree be estimated from the number of wounded. The Americans lost the whole of their artillery - 8 field pieces, upwards of 200 wagons and the greatest part of their baggage."[6] A letter from Cornwallis to Lord George Germain, dated 21 August 1780, says that his army took "about one thousand Prisoners, many of whom wounded" on August 18.[7] The website Documentary History of the Battle of Camden, 16 August 1780 details on its Officer Casualties at Camden page the fates of 48 Continental officers at Camden: 5 were killed, 4 died of wounds, 4 were wounded without being captured, 11 were wounded and captured and 24 were captured without being wounded. These ratios would suggest that a significant number of the Americans wounded in the battle escaped capture.

There are many reasons given for Gates' defeat. The most prominent are the following:

The Battle of Camden has been scrutinized as one of the worst tactical decisions made on part of the Americans throughout the entire war.[citation needed] Following the surrender at Saratoga, Gates became overconfident in the ability of the American troops, which was displayed during this battle as he rushed his tactical deployment. Because Gates was a former British officer, he was accustomed to the traditional British deployment of the most experienced regiments on the place of honor: the right flank of the battle line. Gates had therefore placed the Continental regiments on his right flank, and the mass of militia which had joined him—nearly all of whom had never even fought in a battle—on the left flank, facing the most experienced British regiments.

At first impression, it may seem curious that Gates's deploying his regiments in this fashion was a grave tactical error, as Cornwallis had done exactly the same thing: His Loyalist troops faced the Continentals just as his regulars faced the militia. However, the forces were dissimilar, in that the Loyalists were far more experienced in combat at this point than their southern colonial counterparts. As a result, the Loyalists managed to hold the line against the best Continental troops during the battle, while the Regulars effectively broke the colonial militias.

Aside from tactics on the battlefield, Gates had made several strategic errors before joining the battle: 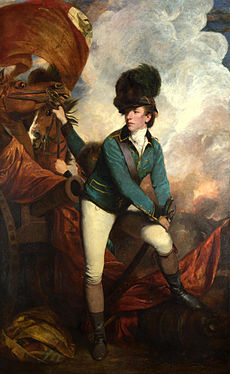 Gates' army had been utterly defeated; it had suffered over 2,000 casualties, some 1,000 of the troops being prisoners. They lost all seven guns and the whole baggage train. Gates lost control of the southern army. Major General Nathanael Greene, rated next to George Washington as the most able and trusted Colonial officer of the Revolution, was given command of the southern army and started recruiting more troops.

Gates, who had strong political connections in the Continental Congress, successfully avoided inquiries into the debacle.

The Camden Battlefield, located about 5 miles (8.0 km) north of Camden, is owned by the Daughters of the American Revolution, and is undergoing preservation in a private-public partnership. The site was declared a National Historic Landmark in 1961, and placed on the National Register of Historic Places in 1966.

Aspects of the battle were included in the 2000 movie The Patriot, in which Ben and Gabriel Martin are seen watching a similar battle. Ben comments at the stupidity of Gates fighting "muzzle to muzzle with Redcoats". The film is not historically accurate, depicting too many Continental troops relative to the number of militia, and showing the Continentals and militia retreating at the same time.