The Province of Carolina was an English and later a British colony of North America. Carolina was originally founded in what is modern day North Carolina. Carolina expanded south, and at its greatest extent, included the modern states of North Carolina, South Carolina, Georgia, Alabama, Tennessee and Mississippi, and parts of modern Florida and Louisiana.[1]

Sir Robert Heath, attorney-general of King Charles I of England, was granted the Cape Fear region of America, incorporated as the Province of Carolina, in 1629.[2] The charter was unrealized and ruled invalid, and a new charter was issued to a group of eight English noblemen, the Lords Proprietors, on March 24, 1663.[3] Charles II granted the land to the eight Lords Proprietors in return for their financial and political assistance in restoring him to the throne in 1660.[4] Charles II intended for the newly created province to serve as an English bulwark to contest lands claimed by Spanish Florida and prevent their northward expansion.[5][6] Led informally by Anthony Ashley-Cooper, 1st Earl of Shaftesbury, the Province of Carolina was controlled from 1663 to 1729 by these lords and their heirs.

In 1691, dissent over the governance of the province led to the appointment of a deputy governor to administer the northern half of Carolina.

The division between the northern and southern governments became complete in 1712, but both colonies remained in the hands of the same group of proprietors. A rebellion against the proprietors broke out in 1719 which led to the appointment of a royal governor for South Carolina in 1720. After nearly a decade in which the British government sought to locate and buy out the proprietors, both North and South Carolina became royal colonies in 1729.

On October 30, 1629, King Charles I granted a patent to Sir Robert Heath for the lands south of 36 degrees and north of 31 degrees, "under the name, in honor of that king, of Carolina."[7] Carolus is Latin for 'Charles'. Heath wanted the land for French Huguenots, but when Charles restricted use of the land to members of the Church of England, Heath assigned his grant to George, Lord Berkeley.[8] King Charles I was executed in 1649 and Heath fled to France where he died. Following the 1660 restoration of the monarchy, Heath's heirs attempted to reassert their claim to the land, but Charles II ruled the claim invalid. 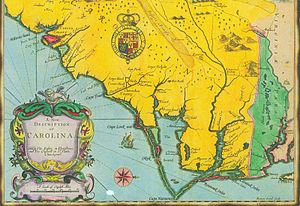 "A New Description of Carolina", engraved by Francis Lamb (London, Tho. Basset and Richard Chiswell, 1676)

On March 24, 1663, Charles issued a new charter to a group of eight English noblemen, granting them the land of Carolina, as a reward for their faithful support of his efforts to regain the throne of England. The eight were called Lords Proprietors or simply Proprietors.

The 1663 charter granted the Lords Proprietor title to all of the land from the southern border of the Virginia Colony at 36 degrees north to 31 degrees north (along the coast of present-day Georgia).[3]

In 1665, the charter was revised slightly (see Royal Colonial Boundary of 1665), with the northerly boundary extended to 36 degrees 30 minutes north to include the lands of settlers along the Albemarle Sound who had left the Virginia Colony. Likewise, the southern boundary was moved south to 29 degrees north, just south of present-day Daytona Beach, Florida, which had the effect of including the existing Spanish settlement at St. Augustine. The charter also granted all the land, between these northerly and southerly bounds, from the Atlantic, westward to the shores of the Pacific Ocean.[9]

The Lords Proprietors named in the charter were Edward Hyde, 1st Earl of Clarendon; George Monck, 1st Duke of Albemarle; William Craven, 1st Earl of Craven; John Berkeley, 1st Baron Berkeley of Stratton; Anthony Ashley Cooper, 1st Earl of Shaftesbury; Sir George Carteret; Sir William Berkeley (brother of John); and Sir John Colleton. Of the eight, the one who demonstrated the most active interest in Carolina was Lord Shaftesbury. Shaftesbury, with the assistance of his secretary, the philosopher John Locke, drafted the Fundamental Constitutions of Carolina, a plan for government of the colony heavily influenced by the ideas of the English political scientist, James Harrington. Some of the other Lords Proprietors also had interests in other colonies: for instance, John Berkeley and George Carteret held stakes in the Province of New Jersey, and William Berkeley had an interest in Virginia.

The Lords Proprietors, operating under their royal charter, were able to exercise their authority with nearly the independence of the king himself. The actual government consisted of a governor, a powerful council, on which half of the councillors were appointed by the Lords Proprietors themselves, and a relatively weak, popularly elected assembly.

Within three generations of Columbus, the Spanish from their Florida base had issued up the coast permeating North Carolina. A hostile Virginia tribe drove them back to Georgia. A Scottish contingent had meanwhile settled in South Carolina only to be extirpated by the Spanish, who inhabited Parris Island, SC as late as 1655. The Spanish were again beaten back to Georgia.[10]

Although the Lost Colony on Roanoke Island was the first English attempt at settlement in the Carolina territory, the first permanent English settlement was not established until 1653, when emigrants from the Virginia Colony, with others from New England and Bermuda, settled at the mouths of the Chowan and Roanoke Rivers, on the shores of Albemarle Sound, in the northeastern corner of present-day North Carolina. The Albemarle Settlements, preceding the royal charter by ten years, came to be known in Virginia as "Rogues' Harbor".[11] By 1664, the region was organized as Albemarle County.

In 1663, Captain William Hilton had noted the presence of a wooden cross erected by the Spaniards that still stood before the town meeting house of the Indians living at what later became Port Royal.[12] In 1665, Sir John Yeamans established a second short-lived English settlement on the Cape Fear River, near present-day Wilmington, North Carolina, which he named Clarendon.

The Lords Proprietors founded a sturdier new settlement when they sent 150 colonists to the province in early 1670, landing them at a location south of the other settlements, near present-day Charleston, South Carolina. Many of the settlers, who stepped off the ship in April of that year, were planters from Barbados. The "Charles Town" settlement, as it was known then, developed more rapidly than the Albemarle and Cape Fear settlements due to the advantages of a natural harbor and expanding trade with the West Indies. Charles Town was made the principal seat of government for the entire province; Lord Shaftesbury specified its street plan. The nearby Ashley and Cooper rivers are named for him.

Due to their remoteness from each other, the northern and southern sections of the colony operated more or less independently until 1691, when Philip Ludwell was appointed governor of the entire province. From that time until 1708, the northern and southern settlements remained under one government. The north continued to have its own assembly and council; the governor resided in Charles Towne and appointed a deputy-governor for the north. During this period, the two halves of the province began increasingly to be known as North Carolina and South Carolina.

Carolina was the first of three colonies in North America settled by the English to have a comprehensive plan. Known as the Grand Model, or Grand Modell, it was composed of a constitution and detailed guidelines for settlement and development. The constitution, titled Fundamental Constitutions of Carolina, was drafted by the philosopher John Locke under the direction of Anthony Ashley Cooper (later made Earl of Shaftesbury]].

From 1708 to 1710, due to disquiet over attempts to establish the Anglican church in the province, the people were unable to agree on a slate of elected officials; consequently, there was no recognized and legal government for more than two years, a period which culminated in Cary's Rebellion when the Lords Proprietors finally commissioned a new governor. This circumstance, coupled with the Tuscarora War and the Yamasee War, and the inability of the Lords Proprietors to act decisively, led to separate governments for North and South Carolina.

Some take this period as the establishment of separate colonies, but that did not officially occur until 1729, when seven of the Lords Proprietors sold their interests in Carolina to the Crown, and both North Carolina and South Carolina became royal colonies. The eighth share was Sir George Carteret's, which had passed to his great-grandson John Carteret, 2nd Earl Granville. He retained ownership of a sixty-mile-wide strip of land in North Carolina adjoining the Virginia boundary, which became known as the Granville District. This district was to become the scene of many disputes, from 1729 until the American Revolutionary War, at which time it was seized by the North Carolina revolutionary government.

Governments under proprietary rule and under crown rule were similarly organized. The primary difference was who was to appoint the governing officials: the Lords Proprietors or the Sovereign.

In 1732, a corporate charter for the Province of Georgia was carved out of South Carolina by King George II.