Battle of the Golden Spurs

The Battle of the Golden Spurs (Dutch: Guldensporenslag, French: Bataille des éperons d'or), known also as the Battle of Courtrai, was a battle between the forces of the Kingdom of France and the County of Flanders fought near Kortrijk (Courtrai) in western Royal Flanders on 11 July 1302. In 1302, after several years of unrest, the people of Flanders revolted against French rule and massacred many Frenchmen in the Flemish city of Bruges. King Philip IV of France immediately organized an expedition under Count Robert II of Artois to put down the rebellion. Meanwhile, the civic militias of several Flemish cities were assembled to counter the expected French attack.

When the two armies met outside the city of Kortrijk, the mounted French knights proved unable to defeat the well-trained Flemish foot militia on a battlefield particularly unsuited for cavalry. The result was a rout of the French nobles, who suffered heavy losses at the hands of the Flemish. The battle was a famous early example of an all-infantry army overcoming an army that depended on the shock attacks of mounted knights.

The conflict began with the Franco-Flemish War (1297-1305) as the French tried to subdue the County of Flanders, formally part of the French Kingdom, to add it to the French lands in 1297. In 1300, King Philip IV of France appointed Jacques de Châtillon as governor of Flanders, and took the Count of Flanders, Guy of Dampierre, hostage. This caused considerable unrest among the influential Flemish urban guilds. Guy had broken feudal ties with Philip In 1297, forming an alliance with Edward I of England, who was betrothed to Guy's daughter Philippina in 1294.

In 1302, the French governor of Flanders, Jacques de Châtillon, took his army and the king's lead advisor and negotiator to Bruges to negotiate a peace with the rebellious towns of the region. Rebel leaders quickly relocated outside town, and the French army harassed the townspeople, especially the families of the rebels. On the morning of 18 May 1302, the rebellious citizens of Bruges returned to the city and murdered every Frenchman they could find, an act known as the Brugse Metten (Bruges Matins). According to legend, they identified the French by asking them to pronounce a Flemish phrase, schilt ende vriend (shield and friend) and everyone who had a problem pronouncing this shibboleth was killed.[3]

King Philip IV of France sent a powerful force led by Count Robert II of Artois to Bruges. The Flemish response consisted of two groups, one of 3,000 men from the city militia of Bruges, led by William of Jülich, grandson of Count Guy and Pieter de Coninck, one of the leaders of the uprising in Bruges. The second group of about 2,500 men from the suburbs of Bruges and the coastal areas, was headed by Guy of Namur, son of Count Guy, and Guy of Dampierre's two sons. The two groups met near Kortrijk. Another 2,500 men came from the east, led by Jan Borluut from Ghent, and another 1,000 men from Ypres, led by Jan van Renesse from Zeeland.

Depiction of the battle on the Courtrai Chest

The Flemish were primarily town militia who were well equipped and trained.[1] The militia fought primarily as infantry, were organized by guild, and equipped with steel helmets, chainmail haubergeons,[1] pikes, bows, crossbows and goedendag.[1] The goedendag was a specifically Flemish weapon, made from a thick 5 feet (1.5 m)-long wooden shaft and topped with a steel spike.[1] They were a well organized force of 9,000, including 400 noblemen, and the urban militias of the time prided themselves on their regular training and preparation. The Flemish militia formed a line formation against cavalry with goedendags and pikes pointed outward.[1] The Flemish force consisted almost solely of infantry with only the leaders mounted, more to express their leadership than for combat.

The French, by contrast, fielded a traditional feudal army with a core of 2,500 noble cavalry, including knights and squires. They were supported by 1,000 crossbowmen, 1,000 spearmen and up to 3,500 other light infantry, totaling around 8,000. Contemporary military theory valued each knight as equal to roughly ten infantry. 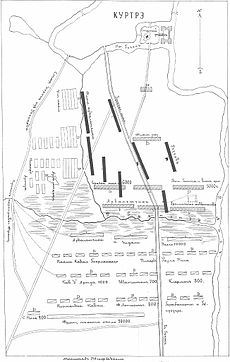 Map of the Flemish and French positions at the start of the battle, with the Lys river to the right, and the castle at the top

The combined Flemish forces met at Courtrai on 26 June and laid siege to the castle, which housed a French garrison. As the siege was being laid, the Flemish leaders began preparing a nearby field for battle. The size of the French response was impressive, with 3,000 knights and 4,000-5,000 infantry being an accepted estimate. After the Flemish unsuccessfully tried to take Courtrai on 9 and 10 July, the two forces clashed on the 11th in an open field near the city.

The field near Courtrai was crossed by numerous ditches and streams dug by the Flemish as Philip's army assembled. Some drained from the river Lys, while others were concealed with dirt and branches, making it difficult for the French cavalry to charge the Flemish lines. The French sent servants to place wood in the streams, but they attacked before they completed their task. The large French infantry force led the initial attack, which went well but French commander Count Robert recalled them so that the noble cavalry could claim the victory. The cavalry were hindered by the streams and ditches (which the infantry had dealt with in the beginning of the battle), and the disciplined Flemish infantry held firm. Unable to break the Flemish line of pikemen, the disorganized, fallen, and mud-drowned French cavalry were an easy target for the heavily armed Flemish infantry. A desperate charge from the French garrison in the besieged castle was thwarted by a Flemish contingent specifically placed there for that task. When they realized the battle was lost, the surviving French fled, only to be pursued over 10 km (6 mi) by the Flemish.

Before the battle, the Flemish militia had either been ordered to take no prisoners or did not care for the military custom of asking for a ransom for captured knights or nobles;[3] modern theory is that there was a clear order that forbade them to take prisoners during the battle (to avoid their ranks being broken when the Flemish infantry took their hostages behind the Flemish lines).[4] Robert II of Artois was surrounded and killed on the field. According to some tales he begged for his life but the Flemish refused, claiming that "they didn't understand French".[5]

The large numbers of golden spurs that were collected from the French knights gave the battle its name.[6] At least a thousand French noblemen were killed, some contemporary accounts placing the total casualties at over ten thousand dead and wounded. The French spurs were hung in the Church of Our Lady in Kortrijk to commemorate the victory and were taken back by the French eighty years later after the Battle of Westrozebeke. 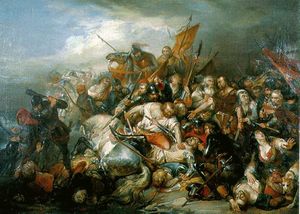 Some of the notable casualties: 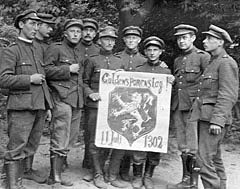 Flemish soldiers celebrating the 11 July during World War I

The Battle of the Golden Spurs had been called the first incidence of the gradual "Infantry Revolution" which occurred in Medieval warfare during the 14th century.[7] In conventional military theory of the time, mounted and heavily armoured knights were considered an essential part of military success and consequently warfare was the preserve of an wealthy elite of bellatores (nobles specialized in warfare) serving as men-at-arms.[8] The fact that this form of army, which was expensive to maintain, could be defeated by basic militia, drawn from the "lower orders", led to a gradual change in the nature of warfare during the subsequent century.[9] The tactics and composition of the Flemish army at Courtrai were later copied or adapted at the battles of Bannockburn (1314), Crecy (1346), Aljubarrota (1385), Sempach (1386), Agincourt (1415), Grandson (1476) and in the battles of the Hussite Wars (1419 - 1434).[10] As a result, cavalry became less important and nobles more commonly fought dismounted.[10] The comparatively low costs of militia armies allowed even small states, such as the Swiss, to raise militarily significant armies and meant that local rebellions were more likely to achieve military success.[11]

As well as consisting almost completely of infantry, the Flemish army was also fighting for an already defeated leader, Guy of Dampierre, who was taken hostage in France. Wars in those times were usually personal arguments between noblemen, and the war ended when one of the noblemen was captured or killed. But the Battle of the Golden Spurs showed that a population could also start a war against an oppressor.

With a rising interest in Medieval history during the 19th century and the rise of Romanticism in art and literature, interest in the Battle within Flanders and Belgium grew. The battle formed the subject of the classic 1838 work of the Flemish writer Hendrik Conscience, The Lion of Flanders (De Leeuw van Vlaanderen), which achieved huge popularity. The battle was considered as the Flemish equivalent of the Six hundred Franchimontois of 1468. Celebration of the battle became associated with the Flemish Movement, which sought further autonomy from Belgium, during the 20th century.

In 1973, the date of the battle, 11 July, was picked as the Flemish Community's annual official holiday.