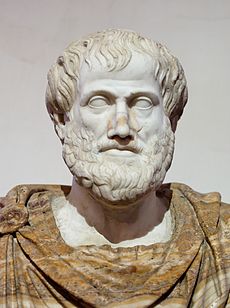 Bust of Aristotle, whose Prior Analytics contained an early discussion of this fallacy

The term "begging the question", as this is usually phrased, originated in the 16th century as a mistranslation of the Latin petitio principii, which actually translates as "assuming the initial point".[2] In modern vernacular usage, "to beg the question" is sometimes used to mean "to invite the question" (as in "This begs the question of whether...") or "to dodge a question".[2] These usages are often criticized as being mistaken.[3]

The original phrase used by Aristotle from which begging the question descends is: τὸ ἐξ ἀρχῆς (or sometimes ἐν ἀρχῇ) αἰτεῖν, asking for the initial thing. Aristotle's intended meaning is closely tied to the type of dialectical argument he discusses in his Topics, book VIII: a formalized debate in which the defending party asserts a thesis that the attacking party must attempt to refute by asking yes-or-no questions and deducing some inconsistency between the responses and the original thesis.

In this stylized form of debate, the proposition that the answerer undertakes to defend is called "the initial thing" (τὸ ἐξ ἀρχῆς, τὸ ἐν ἀρχῇ) and one of the rules of the debate is that the questioner cannot simply ask for it (that would be trivial and uninteresting). Aristotle discusses this in Sophistical Refutations and in Prior Analytics book II, (64b, 34–65a 9, for circular reasoning see 57b, 18–59b, 1).

The stylized dialectical exchanges Aristotle discusses in the Topics included rules for scoring the debate, and one important issue was precisely the matter of asking for the initial thing—which included not just making the actual thesis adopted by the answerer into a question, but also making a question out of a sentence that was too close to that thesis (for example, PA II 16).

The term was translated into English from Latin in the 16th century. The Latin version, petitio principii, "asking for the starting point", can be interpreted in different ways. Petitio (from peto), in the post-classical context in which the phrase arose, means assuming or postulating, but in the older classical sense means petition, request or beseeching.[2][4] Principii, genitive of principium, means beginning, basis or premise (of an argument). Literally petitio principii means "assuming the premise" or "assuming the original point".

Begging or assuming the point at issue consists (to take the expression in its widest sense) [of] failing to demonstrate the required proposition. But there are several other ways in which this may happen; for example, if the argument has not taken syllogistic form at all, he may argue from premises which are less known or equally unknown, or he may establish the antecedent by means of its consequents; for demonstration proceeds from what is more certain and is prior. Now begging the question is none of these. [...] If, however, the relation of B to C is such that they are identical, or that they are clearly convertible, or that one applies to the other, then he is begging the point at issue.... [B]egging the question is proving what is not self-evident by means of itself...either because predicates which are identical belong to the same subject, or because the same predicate belongs to subjects which are identical.

Aristotle's distinction between apodictic science and other forms of non-demonstrative knowledge rests on an epistemology and metaphysics wherein appropriate first principles become apparent to the trained dialectician:

Aristotle's advice in 'S.E. 27 for resolving fallacies of Begging the Question is brief. If one realizes that one is being asked to concede the original point, one should refuse to do so, even if the point being asked is a reputable belief. On the other hand, if one fails to realize that one has conceded the point at issue and the questioner uses the concession to produce the apparent refutation, then one should turn the tables on the sophistical opponent by oneself pointing out the fallacy committed. In dialectical exchange it is a worse mistake to be caught asking for the original point than to have inadvertently granted such a request. The answerer in such a position has failed to detect when different utterances mean the same thing. The questioner, if he did not realize he was asking the original point, has committed the same error. But if he has knowingly asked for the original point, then he reveals himself to be ontologically confùsed: he has mistaken what is non-self-explanatory (known through other things) to be something self-explanatory (known through itself). In pointing this out to the false reasoner, one is not just pointing out a tactical psychological misjudgment by the questioner. It is not simply that the questioner falsely thought that the original point, if placed under the guise of a semantic equivalent, or a logical equivalent, or a covering universal, or divided up into exhaustive parts, would be more persuasive to the answerer. Rather, the questioner falsely thought that a non-self-explanatory fact about the world was an explanatory first principle. For Aristotle, that certain facts are self-explanatory while others are not is not a reflection solely of the cognitive abilities of humans. It is primarily a reflection of the structure of noncognitive reality. In short, a successful resolution of such a fallacy requires a firm grasp of the correct explanatory powers of things. Without a knowledge of which things are self-explanatory and which are not, the reasoner is liable to find a question-begging argument persuasive.[5]

— Scott Gregory Schreiber, Aristotle on False Reasoning: Language and the World in the Sophistical Refutations

Thomas Fowler believed that Petitio Principii would be more properly called Petitio Quæsiti, which is literally "begging the question".[6]

The fallacy of petitio principii, or "begging the question" is committed when someone attempts to prove a proposition based on a premise that itself requires proof.[7]

When the fallacy of begging the question is committed in a single step, it is sometimes called a hysteron proteron,[8][9] as in the statement[10]

Examples of this rhetorical device are seen in the U.S. Supreme Court, as from this dissent by Antonin Scalia in Gonzales v. Oregon "[i]f the term 'legitimate medical purpose' has any meaning, it surely excludes the prescription of drugs to produce death". This statement assumes as fact the very question of the case, whether ending life will become a legitimate medical purpose for physicians.

Such fallacies may not be immediately obvious—obscured by synonyms or synonymous phrases. One way to beg the question is to make a statement first in concrete terms, then in abstract ones, or vice versa.[11] Another is to "bring forth a proposition expressed in words of Saxon origin, and give as a reason for it the very same proposition stated in words of Norman origin",[12] as in this example:

When the fallacy of begging the question is committed in more than one step, some authors consider it circulus in probando or reasoning in a circle.[8][14] However, there is no fallacy if the missing premise is acknowledged, and if not, there is no circle.

"Begging the question" can also refer to an argument in which the unstated premise is essential to, but not identical with the conclusion, or is "controversial or questionable for the same reasons that typically might lead someone to question the conclusion".[15]

Begging the question is not considered a formal fallacy (an argument that is defective because it uses an incorrect deductive step). Rather, it is a type of informal fallacy that is logically valid but unpersuasive, in that it fails to prove anything other than what is already assumed.[17][18][19]

In fact, begging the question is often considered a type of circular reasoning.[citation needed]

Begging the question is similar to the complex question (also known as trick question or fallacy of many questions): a question that, to be valid, requires the truth of another question that has not been established. For example, "Which color dress is Mary wearing?" may be fallacious because it presupposes that Mary is wearing a dress. Unless it has previously been established that her outfit is a dress, the question is fallacious because she could be wearing a pantsuit.[22][23]

Another related fallacy is ignoratio elenchi or irrelevant conclusion: an argument that fails to address the issue in question, but appears to do so. An example might be a situation where A and B are debating whether the law permits A to do something. If A attempts to support her position with an argument that the law ought to allow her to do the thing in question, then she is guilty of ignoratio elenchi.[24]

In philosophical, logical, grammatical, and legal contexts, most commenters believe that such usage is mistaken, or at best, unclear.[1][25][26][27]