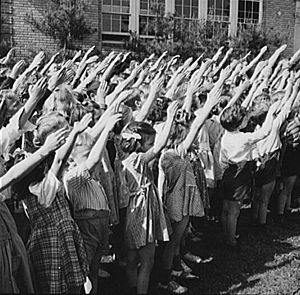 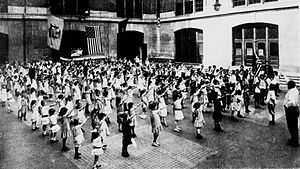 The Bellamy salute is the salute described by Francis Bellamy, Christian socialist minister and author, to accompany the American Pledge of Allegiance, which he had authored. During the period when it was used with the Pledge of Allegiance, it was sometimes known as the "flag salute". Later, during the 1920s and 1930s, Italian fascists and Nazis adopted a salute which had a similar form, and which was derived from the so-called Roman salute. This resulted in controversy over the use of the Bellamy salute in the United States. It was officially replaced by the hand-over-heart salute when Congress amended the Flag Code on December 22, 1942.

The inventor of the Bellamy salute was James B. Upham, junior partner and editor of The Youth's Companion.[1] Bellamy recalled Upham, upon reading the pledge, came into the posture of the salute, snapped his heels together, and said "Now up there is the flag; I come to salute; as I say 'I pledge allegiance to my flag,' I stretch out my right hand and keep it raised while I say the stirring words that follow."[1]

The Bellamy salute was first demonstrated on October 12, 1892 according to Bellamy's published instructions for the "National School Celebration of Columbus Day":

At a signal from the Principal the pupils, in ordered ranks, hands to the side, face the Flag. Another signal is given; every pupil gives the flag the military salute -- right hand lifted, palm downward, to align with the forehead and close to it. Standing thus, all repeat together, slowly, “I pledge allegiance to my Flag and the Republic for which it stands; one Nation indivisible, with Liberty and Justice for all.” At the words, “to my Flag,” the right hand is extended gracefully, palm upward, toward the Flag, and remains in this gesture till the end of the affirmation; whereupon all hands immediately drop to the side.

The initial civilian salute was replaced with a hand-on-heart gesture, followed by the extension of the arm as described by Bellamy. Though the instruction called for the palm to be up, many found this awkward, and performed it with the palm down (see pictures above).

In the 1920s, Italian fascists adopted what they called the Roman salute to symbolize their claim to have revitalized Italy on the model of ancient Rome. This was quickly copied by the German Nazis, creating the Nazi salute. The similarity to the Bellamy salute led to confusion, especially during World War II. From 1939 until the attack on Pearl Harbor, detractors of Americans who argued against intervention in World War II produced propaganda using the salute to lessen those Americans' reputations. Among the anti-interventionist Americans was aviation pioneer Charles Lindbergh. Supporters of Lindbergh's views would claim that Lindbergh did not support Adolf Hitler, and that pictures of him appearing to do the Nazi salute were actually pictures of him using the Bellamy salute. In his Pulitzer prize winning biography Lindbergh, author A. Scott Berg explains that interventionist propagandists would photograph Lindbergh and other isolationists using this salute from an angle that left out the American flag, so it would be indistinguishable from the Hitler salute to observers.[2]

In order to prevent further confusion or controversy, the United States Congress instituted the hand-over-the-heart gesture as the salute to be rendered by civilians during the Pledge of Allegiance in the United States, instead of the Bellamy salute.[3] This was done when Congress amended the Flag Code on December 22, 1942.[4][5]

There was initially some resistance to dropping the Bellamy salute, for example from the Daughters of the American Revolution,[6] but this opposition died down quickly following Nazi Germany's declaration of war against the United States on December 11, 1941.