The Benelux Union (Dutch: Benelux Unie;[4] French: Union Benelux[5]) is a politico-economic union of three neighbouring states in central-western Europe: Belgium, the Netherlands, and Luxembourg.[6] The name—Benelux—is formed from joining the first two or three letters of each country's name—Belgium Netherlands Luxembourg—and was first used to name the customs agreement that initiated the union (signed in 1944).[7] It is now used more generally to refer to the geographic, economic and cultural grouping of the three countries.

In 1951, these countries joined West Germany, France, and Italy to form the European Coal and Steel Community, a predecessor of the European Economic Community (EEC) and today's European Union (EU).

The main institutions of the Union are the Committee of Ministers, the Benelux Parliament, the Council of the Union and the Secretariat-General, while the Benelux Organization for Intellectual Property and the Benelux Court of Justice cover the same territory but are not part of the Union. 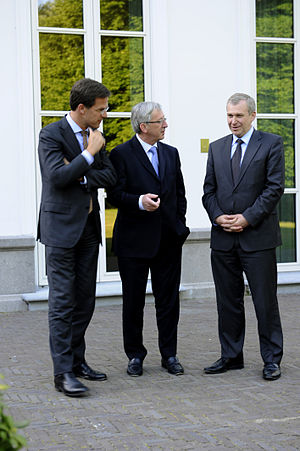 In 1944, exiled representatives of the three countries signed the London Customs Convention, the treaty that established the Benelux Customs Union. Ratified in 1947, the treaty was in force from 1948 until it was superseded by the Benelux Economic Union. The treaty establishing the Benelux Economic Union (Benelux Economische Unie/Union Économique Benelux) was signed on 3 February 1958 in The Hague and came into force on 1 November 1960 to promote the free movement of workers, capital, services, and goods in the region. Under the Treaty the Union implies the co-operation of economic, financial and social policies.

The unification of the law of the three Benelux countries is mainly achieved by regulations of its Committee of Ministers, that only bind the three states, but are not directly applicable in their internal legal orders.[clarification needed] They only become legally valid after having been incorporated into national law.[citation needed]

The Treaty establishing the Benelux Union has provided the Committee of Ministers with the following legal instruments: decisions, conventions, recommendations and directives.

The Committee of Ministers can promulgate decisions in the fields for which it has competence - those fields are explicitly set down in the Union Treaty or the additional conventions. When the Committee of Ministers adopts a decision, it immediately becomes binding on the three governments. For a decision to be also applicable to the citizen, it must be transposed into national law.

The Union Treaty is not exhaustive. For this reason, Article 19 of the Treaty provides that the Committee of Ministers may conclude additional conventions. These therefore constitute extensions of the Union Treaty. They are submitted to the national parliaments for approval in keeping with the ratification procedure applied in each of the Member States. Thus there are a large number of Benelux conventions in a wide range of subject matters.[8]

The Committee of Ministers can issue directives to the Council of Economic Union, the Committees, the General Secretariat and the joint services.[citation needed]

In 1965, the treaty establishing a Benelux Court of Justice was signed. It entered into force in 1975.[citation needed] The Court, composed of judges from the highest courts of the three States, has to guarantee the uniform interpretation of common legal rules. This international judicial institution is located in Brussels.

The Benelux is particularly active in the field of intellectual property. The three countries established a Benelux Trademarks Office and a Benelux Designs Office, both situated in The Hague. In 2005, they concluded a treaty establishing a Benelux Organization for Intellectual Property which replaced both offices upon its entry into force on 1 September 2006. This Organization is the official body for the registration of trademarks and designs in the Benelux. In addition, it offers the possibility to formally record the existence of ideas, concepts, designs, prototypes and the like.[9] 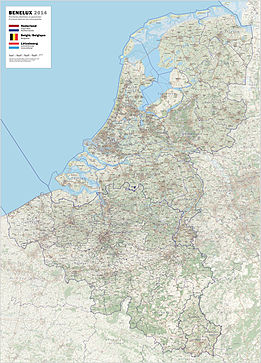 Detailed map of the Benelux, including all municipalities.

In 2000, Belgium and the Netherlands jointly hosted the UEFA European Championship. In June 2007, representatives of the three countries announced they would bid, as a single political entity, for the 2018 FIFA World Cup.[10]

Renewal of the agreement 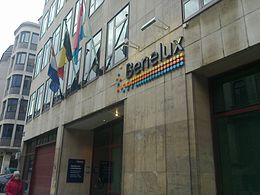 The Benelux Union office in Brussels.

The Treaty between the Benelux countries establishing the Benelux Economic Union was limited to a period of 50 years. During the following years, and even more so after the creation of the European Union, the Benelux cooperation focused on developing other fields of activity within a constantly changing international context.

At the end of the 50 years, the governments of the three Benelux countries decided to renew the agreement, taking into account the new aspects of the Benelux-cooperation – such as security – and the new federal government structure of Belgium. The original establishing treaty, set to expire in 2010, was replaced by a new legal framework (called the Treaty revising the Treaty establishing the Benelux Economic Union), which was signed on 17 June 2008.

The new treaty has no set time limit and the name of the Benelux Economic Union changed to Benelux Union to reflect the broad scope on the union.[11] The main objectives of the treaty are the continuation and enlargement of the cooperation between the three member states within a larger European context. The renewed treaty explicitly foresees the possibility that the Benelux countries will cooperate with other European member States or with regional cooperation structures. The new Benelux cooperation focuses on three main topics: internal market and economic union, sustainability, justice and internal affairs. The number of structures in the renewed Treaty has been reduced and thus simplified. Five Benelux institutions remain: the Benelux Committee of Ministers, the Benelux Council, the Benelux Parliament, the Benelux Court of Justice, the Benelux Secretariat General. Beside these five institutions, the Benelux Organization for Intellectual Property is also present in this Treaty.