From Infogalactic: the planetary knowledge core
Jump to: navigation, search
For "Works Cited" lists, see Citation. For editing of Wikipedia's bibliographies, see Wikipedia:Manual of Style/Lists of works § Bibliographies.
"Bibliology" redirects here. For the theological study of the nature of the Bible, see Biblical theology. 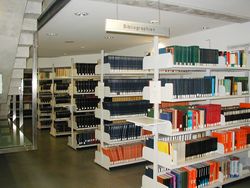 Bibliographies at the University Library of Graz

Descriptive bibliographers follow specific conventions and associated classification in their description. Titles and title pages are transcribed in a quasi-facsimile style and representation. Illustration, typeface, binding, paper, and all physical elements related to identifying a book follow formulaic conventions, as Bower's established in his foundational opus, The Principles of Bibliographic Description. The thought expressed in this book expands substantively on W. W. Greg’s groundbreaking theory that argued for the adoption of formal bibliographic principles (Greg 29). Fundamentally, analytical bibliography is concerned with objective, physical analysis and history of a book while descriptive bibliography employs all data that analytical bibliography furnishes and then codifies it with a view to identifying the ideal copy or form of a book that most nearly represents the printer’s initial conception and intention in printing.

D. F. McKenzie extended previous notions of bibliography as set forth by W. W. Greg, Bowers, Gaskell and Tanselle. He describes the nature of bibliography as "the discipline that studies texts as recorded forms, and the processes of their transmission, including their production and reception" (1999 12). This concept broadens the scope of bibliography to include "non-book texts" and an accounting for their material form and structure, as well as textual variations, technical and production processes that bring sociocultural context and effects into play. McKenzie's perspective contextualizes textual objects or artifacts with sociological and technical factors that have an effect on production, transmission and, ultimately, ideal copy (2002 14). Bibliography, generally, concerns the material conditions of books [as well as other texts] how they are designed, edited, printed, circulated, reprinted, collected.[3]

Bibliographic works differ in the amount of detail depending on the purpose and can generally be divided into two categories: enumerative bibliography (also called compilative, reference or systematic), which results in an overview of publications in a particular category and analytical or critical bibliography, which studies the production of books.[4][5] In earlier times, bibliography mostly focused on books. Now, both categories of bibliography cover works in other media including audio recordings, motion pictures and videos, graphic objects, databases, CD-ROMs[6] and websites.

An enumerative bibliography is a systematic list of books and other works such as journal articles. Bibliographies range from "works cited" lists at the end of books and articles, to complete and independent publications. A notable example of a complete, independent publication is Gow's, A. E. Housman: A Sketch, Together with a List of His Classical Papers (1936). As separate works, they may be in bound volumes such as those shown on the right, or computerized bibliographic databases. A library catalog, while not referred to as a "bibliography," is bibliographic in nature. Bibliographical works are almost always considered to be tertiary sources.

Citation styles vary. An entry for a book in a bibliography usually contains the following elements:

An entry for a journal or periodical article usually contains:

A bibliography may be arranged by author, topic, or some other scheme. Annotated bibliographies give descriptions about how each source is useful to an author in constructing a paper or argument. These descriptions, usually a few sentences long, provide a summary of the source and describe its relevance. Reference management software may be used to keep track of references and generate bibliographies as required.

Fredson Bowers described and formulated a standardized practice of descriptive bibliography in his Principles of Bibliographical Description (1949). Scholars to this day treat Bowers' scholarly guide as authoritative. In this classic text, Bowers describes the basic function of bibliography as, "[providing] sufficient data so that a reader may identify the book described, understand the printing, and recognize the precise contents" (124).

Descriptive bibliographies as a scholarly product usually include information on the following aspect of a given book as a material object:

According to Bowers (193), the format of a book is usually abbreviated in the collation formula:

The collation, which follows the format, is the statement of the order and size of the gatherings.

For example, a quarto that consists of the signed gatherings:

would be represented in the collation formula:

This branch of the bibliographic discipline examines the material features of a textual artifact – such as type, ink, paper, imposition, format, impressions and states of a book – to essentially recreate the conditions of its production. Analytical bibliography often uses collateral evidence – such as general printing practices, trends in format, responses and non-responses to design, etc. – to scrutinize the historical conventions and influences underlying the physical appearance of a text. The bibliographer utilizes knowledge gained from the investigation of physical evidence in the form of a descriptive bibliography or textual bibliography.[7] Descriptive bibliography is the close examination and cataloging of a text as a physical object, recording its size, format, binding, and so on, while textual bibliography (or textual criticism) identifies variations – and the aetiology of variations – in a text with a view to determining "the establishment of the most correct form of [a] text (Bowers 498[1]).

The word bibliographia (βιβλιογραφία) was used by Greek writers in the first three centuries AD to mean the copying of books by hand. In the 12th century, the word started being used for "the intellectual activity of composing books". The 17th century then saw the emergence of the modern meaning, that of description of books.[8] Currently, the field of bibliography has expanded to include studies that consider the book as a material object.[9]

Systematic lists of media other than books can be referred to with terms formed analogously to bibliography:

Arachniography is a term coined by NASA research historian Andrew J. Butrica, which means a reference list of URLs about a particular subject. It is equivalent to a bibliography in a book. The name derives from arachne in reference to a spider and its web.[10][11]

Bibliography as a field of study

Bibliography is a specialized aspect of library science (or library and information science, LIS) and documentation science. The founder of documentation, Paul Otlet, wrote about "the science of bibliography".[12][13] However, there have recently been voices claiming that "the bibliographical paradigm" is obsolete, and it is not today common in LIS. A defense of the bibliographical paradigm was provided by Hjørland (2007).[14] The quantitative study of bibliographies is known as bibliometrics, which is today an influential subfield in LIS. [15] [16]