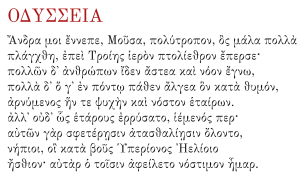 The language of the Hellenistic phase is known as Koine (common), while the language from the late period onward features no considerable differences from Medieval Greek. Koine is regarded as a separate historical stage of its own, although in its earlier form, it closely resembled the Classical. Prior to the Koine period, Greek of the classic and earlier periods included several regional dialects.

Ancient Greek was the language of Homer and of classical Athenian historians, playwrights, and philosophers. It has contributed many words to English vocabulary and has been a standard subject of study in educational institutions of the West since the Renaissance. This article primarily contains information about the Epic and Classical phases of the language.

Ancient Greek was a pluricentric language, divided into many dialects. The main dialect groups are Attic and Ionic, Aeolic, Arcadocypriot, and Doric, many of them with several subdivisions. Some dialects are found in standardized literary forms used in literature, while others are attested only in inscriptions.

There are also several historical forms. Homeric Greek is a literary form of Archaic Greek (derived primarily from Ionic and Aeolic) used in the epic poems, the "Iliad" and "Odyssey", and in later poems by other authors. Homeric Greek had significant differences in grammar and pronunciation from Classical Attic and other Classical-era dialects.

The origins, early form and development of the Hellenic language family are not well understood because of a lack of contemporaneous evidence. Several theories exist about what Hellenic dialect groups may have existed between the divergence of early Greek-like speech from the common Proto-Indo-European language. They have the same general outline, but differ in some of the detail. The only attested dialect from this period[2] is Mycenaean, but its relationship to the historical dialects and the historical circumstances of the times imply that the overall groups already existed in some form.

Scholars assume that major Ancient Greek period dialect groups developed not later than 1120 BC, at the time of the Dorian invasion(s)—and that their first appearances as precise alphabetic writing began in the 8th century BC. The invasion would not be "Dorian" unless the invaders had some cultural relationship to the historical Dorians. The invasion is known to have displaced population to the later Attic-Ionic regions, who regarded themselves as descendants of the population displaced by or contending with the Dorians.

The Greeks of this period believed there were three major divisions of all Greek people—Dorians, Aeolians, and Ionians (including Athenians), each with their own defining and distinctive dialects. Allowing for their oversight of Arcadian, an obscure mountain dialect, and Cypriot, far from the center of Greek scholarship, this division of people and language is quite similar to the results of modern archaeological-linguistic investigation.

One standard formulation for the dialects is:[3]

West vs. non-west Greek is the strongest marked and earliest division, with non-west in subsets of Ionic-Attic (or Attic-Ionic) and Aeolic vs. Arcado-Cypriot, or Aeolic and Arcado-Cypriot vs. Ionic-Attic. Often non-west is called East Greek.

The Arcado-Cypriot group apparently descended more closely from the Mycenaean Greek of the Bronze Age.

Pamphylian, spoken in a small area on the south-western coast of Asia Minor and little preserved in inscriptions, may be either a fifth major dialect group, or it is Mycenaean Greek overlaid by Doric, with a non-Greek native influence.

The Lesbian dialect was a member of the Aegean/Asiatic Aeolic sub-group.

All the groups were represented by colonies beyond Greece proper as well, and these colonies generally developed local characteristics, often under the influence of settlers or neighbors speaking different Greek dialects.

The dialects outside the Ionic group are known mainly from inscriptions, notable exceptions being fragments of the works of the poetess Sappho from the island of Lesbos and the poems of the Boeotian poet, Pindar.

After the conquests of Alexander the Great in the late 4th century BC, a new international dialect known as Koine or Common Greek developed, largely based on Attic Greek, but with influence from other dialects. This dialect slowly replaced most of the older dialects, although Doric dialect has survived to the present in the form of the Tsakonian dialect of Modern Greek, spoken in the region of modern Sparta. Doric has also passed down its aorist terminations into most verbs of Demotic Greek. By about the 6th century AD, the Koine had slowly metamorphosized into Medieval Greek.

Ancient Greek differs from Proto-Indo-European and other Indo-European languages in certain ways. In phonotactics, Ancient Greek words could only end in a vowel or /n s r/; final stops were lost, as in γάλα "milk", compared with γάλακτος "of milk" (genitive). Ancient Greek of the classical period also differed in phonemic inventory:

The pronunciation of Ancient Greek was very different from that of Modern Greek. Ancient Greek had long and short vowels; many diphthongs; double and single consonants; voiced, voiceless, and aspirated stops; and a pitch accent. In Modern Greek, all vowels and consonants are short—many vowels and diphthongs once pronounced distinctly are pronounced as /i/ (iotacism). Some of the stops and glides in diphthongs have become fricatives, and the pitch accent has changed to a stress accent. Many of these changes took place in the Koine Greek period. The writing system of Modern Greek, however, does not reflect all pronunciation changes.

The examples below represent Attic Greek in the 5th century BC. Ancient pronunciation can never be reconstructed with certainty, but Greek from this period is well documented and there is little disagreement among linguists as to the general nature of the sounds that the letters represent. 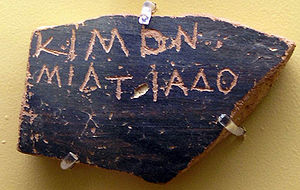 Ostracon bearing the name of Cimon, Stoa of Attalos

Greek, like all of the older Indo-European languages, is highly inflected. It is highly archaic in its preservation of Proto-Indo-European forms. In Ancient Greek, nouns (including proper nouns) have five cases (nominative, genitive, dative, accusative, and vocative), three genders (masculine, feminine, and neuter), and three numbers (singular, dual, and plural). Verbs have four moods (indicative, imperative, subjunctive, and optative) and three voices (active, middle, and passive), as well as three persons (first, second, and third) and various other forms. Verbs are conjugated through seven combinations of tenses and aspect (generally simply called "tenses"): the present, future, and imperfect are imperfective in aspect; the aorist (perfective aspect); a present perfect, pluperfect and future perfect. Most tenses display all four moods and three voices, although there is no future subjunctive or imperative. Also, there is no imperfect subjunctive, optative or imperative. The infinitives and participles correspond to the finite combinations of tense, aspect, and voice.

The indicative of past tenses adds (conceptually, at least) a prefix /e-/, called the augment. This was probably originally a separate word, meaning something like "then", added because tenses in PIE had primarily aspectual meaning. The augment is added to the indicative of the aorist, imperfect, and pluperfect, but not to any of the other forms of the aorist (no other forms of the imperfect and pluperfect exist).

Some verbs augment irregularly; the most common variation is e → ei. The irregularity can be explained diachronically by the loss of s between vowels. In verbs with a prefix, the augment is placed not at the start of the word, but between the prefix and the original verb. For example, προσ(-)βάλλω (I attack) goes to προσέβαλoν in the aorist.

Following Homer's practice, the augment is sometimes not made in poetry, especially epic poetry.

The augment sometimes substitutes for reduplication; see below.

Almost all forms of the perfect, pluperfect, and future perfect reduplicate the initial syllable of the verb stem. (Note that a few irregular forms of perfect do not reduplicate, whereas a handful of irregular aorists reduplicate.) The three types of reduplication are:

Irregular duplication can be understood diachronically. For example, lambanō (root lab) has the perfect stem eilēpha (not *lelēpha) because it was originally slambanō, with perfect seslēpha, becoming eilēpha through compensatory lengthening.

Reduplication is also visible in the present tense stems of certain verbs. These stems add a syllable consisting of the root's initial consonant followed by i. A nasal stop appears after the reduplication in some verbs.[5]

Ancient Greek was written in the Greek alphabet, with some variation among dialects. Early texts are written in boustrophedon style, but left-to-right became standard during the classic period. Modern editions of Ancient Greek texts are usually written with accents and breathing marks, interword spacing, modern punctuation, and sometimes mixed case, but these were all introduced later.

The beginning of Apology by Plato exemplifies Attic Greek from the Classical period of Ancient Greek:

Transliterated into the Latin alphabet using a modern version of the Erasmian scheme:

What you, men of Athens, have learned from my accusers, I do not know: but I, for my part, nearly forgot who I was thanks to them, since they spoke so persuasively. And yet, of the truth, they have spoken, one might say, nothing at all. 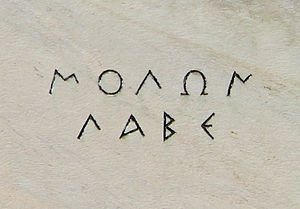 The study of Ancient Greek in European countries in addition to Latin occupied an important place in the syllabus from the Renaissance until the beginning of the 20th century. Ancient Greek is still taught as a compulsory or optional subject especially at traditional or elite schools throughout Europe, such as public schools and grammar schools in the United Kingdom. It is compulsory in the Liceo classico in Italy, in the gymnasium in the Netherlands, in some classes in Austria, in Croatia in klasična gimnazija and it is optional in the Humanistisches Gymnasium in Germany (usually as a third language after Latin and English, from the age of 14 to 18). In 2006/07, 15,000 pupils studied Ancient Greek in Germany according to the Federal Statistical Office of Germany, and 280,000 pupils studied it in Italy.[6] It is a compulsory subject alongside Latin in the Humanities branch of Spanish Bachillerato. Ancient Greek is also taught at most major universities worldwide, often combined with Latin as part of Classics. It will also be taught in state primary schools in the UK, to boost children’s language skills,[7][8][9] and will be offered as a foreign language to pupils in all primary schools from 2014 as part of a major drive to boost education standards, together with Latin, Mandarin, French, German, Spanish, and Italian.[10] Ancient Greek is also taught as a compulsory subject in Gymnasia and Lykia in Greece.[11][12]

Modern authors rarely write in Ancient Greek, though Jan Křesadlo wrote some poetry and prose in the language, and some volumes of Asterix[13] and Harry Potter and the Philosopher's Stone[14] have been translated into Ancient Greek. Oνόματα Kεχιασμένα (Onomata Kechiasmena) is the first magazine of crosswords and puzzles in Ancient Greek.[15] Its first issue appeared in April 2015 as an annex to Hebdomada Aenigmatum. Alfred Rahlfs included a preface, a short history of the Septuagint text, and other front matter translated into Ancient Greek in his 1935 edition of the Septuagint; Robert Hanhart also included the introductory remarks to the 2006 revised Rahlfs–Hanhart edition in the language as well.[16]

Ancient Greek is also used by organizations and individuals, mainly Greek, who wish to denote their respect, admiration or preference for the use of this language. This use is sometimes considered graphical, nationalistic or funny. In any case, the fact that modern Greeks can still wholly or partly understand texts written in non-archaic forms of ancient Greek shows the affinity of modern Greek language to its ancestral predecessor.[17]

An isolated community near Trabzon, Turkey, an area where Pontic Greek is spoken, has been found to speak a variety of Greek that has parallels, both structurally and in its vocabulary, to Ancient Greek not present in other varieties.[18] As few as 5,000 people speak the dialect but linguists believe that it is the closest living language to Ancient Greek.[19][20]

Ancient Greek is often used in the coinage of modern technical terms in the European languages: see English words of Greek origin. Latinized forms of Ancient Greek roots are used in many of the scientific names of species and in scientific terminology.