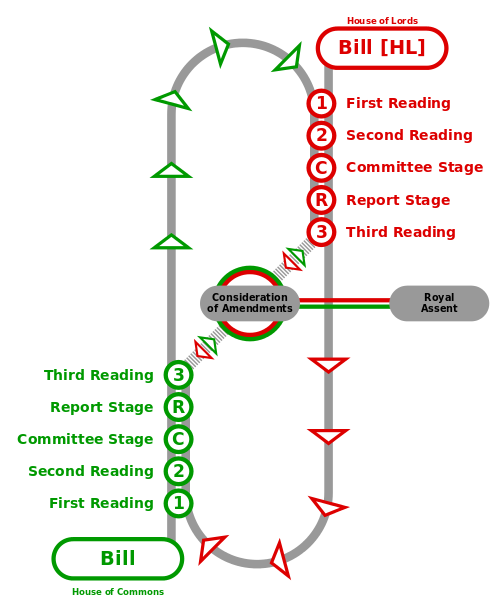 A graphic representation of the legislative procedure in the Parliament of the United Kingdom and Commonwealth Countries. (The names of Legislative Chambers vary throughout the Commonwealth.) In the circumstances of republics, Royal Assent is substituted with Presidential Assent.[citation needed]

A bill is proposed legislation under consideration by a legislature.[1] A bill does not become law until it is passed by the legislature and, in most cases, approved by the executive. Once a bill has been enacted into law, it is called an Act or a statute.

The preparation of a bill may involve the production of a draft bill prior to the introduction of the bill into the legislature.[3] In the United Kingdom, draft Bills are frequently considered to be confidential.[4]

While mechanisms exist to allow other members of the legislature to introduce bills, these are subject to strict timetables and usually fail unless a consensus is reached. In the US system, where the executive is formally separated from the legislature, all bills must originate from the legislature. Bills can be introduced using the following procedures:

In the United States Congress, in both chambers, a bill is the form used for most legislation, whether permanent or temporary, general or special, public or private.[5] In the House, a bill is introduced by a member placing a hard copy into a wooden box called a hopper. The bill must bear the signature of the member introducing it to verify that the member actually intended to introduce the bill. The member is then called the sponsor of that bill. That member may add the names of other members onto the bill who also support it. These members are called co-sponsors. If a member was a co-sponsor and their name was on the bill when it was introduced, they are called an original co-sponsor. Additional co-sponsors to bills are printed in the Congressional Record in a section designated for that purpose. Members may also remove their names as co-sponsors from bills if the bill is later amended such that they no longer support it; this is typically done via a unanimous consent agreement. This action is also included in the Congressional Record.

With the assistance of the Parliamentarian, the Speaker of the House refers the bill to one or more committees.[6] These committees consider legislation relating to each policy area jurisdictions. Thousands of bills are introduced in every session of Congress, and no single member can possibly be adequately informed on all the issues that arise. The committee system is a way to provide for specialization, or a division of the legislative labor. Sometimes called "little legislatures," committees usually have the final say on pieces of legislation. Committees only very rarely are deprived over control of a bill; although this kind of action is provided for in the rules of each chamber.

Bills are generally considered through a number of readings. This refers to the historic practice of the clerical officers of the legislature reading the contents of a bill to the legislature. While the bill is no longer read, the motions on the bill still refer to this practice.

In the British/Westminster system, a bill is read the first time when it is introduced. This is accompanied by an order that the bill be printed and considered again. At the second reading the general merits of the bill are considered – it is out of order to criticise a bill at this stage for technical defects in drafting. After the second reading the bill is referred to a committee, which considers the bill line by line proposing amendments. The committee reports to the legislature, at which stage further amendments are proposed. Finally a third reading debate at which the bill as amended is considered in its entirety. In a bicameral legislature the process is repeated in the other house, before the Bill is submitted to the executive for approval.

Where a piece of primary legislation is termed an act, the process of a bill becoming law may be termed enactment. Once a bill is passed by the legislature, it may automatically become law, or it may need need further approval, in which case enactment may be effected by the approver's signature or proclamation.

Bills passed by the legislature usually require the approval of the executive such as the monarch, president, or governor to become law.[7] An exception was the Irish Free State from the abolition of the Governor-General in December 1936 to the creation of the office of President in December 1937, during which period bills approved by the Oireachtas became law immediately.

In parliamentary systems, approval is normally a formality, since the ceremonial head is directed by an executive controlled by the legislature. In constitutional monarchies, this approval is called royal assent. In rare cases approval may be refused or "reserved" by the ceremonial head's use of a reserve power. The legislature may have significantly less power to introduce bills on such issues and may require the approval beforehand. In Commonwealth realms the royal prerogative informs this. In the United Kingdom, for example, cases include payments to the royal family, succession to the throne, and the monarch's exercise of prerogative powers.

In presidential systems, the need to receive approval can be used as a political tool by the executive, and its refusal is known as a veto. The legislature may be able to override the veto by means of a supermajority vote.

An act is typically promulgated by being published in an official gazette. This may be required on enactment, coming into force, or both.

Legislatures give bills numbers as they progress.

In the United States, all bills originating in the House of Representatives begin with "H.R." and all bills originating from the Senate begin with an "S.". Every two years, at the start of odd-numbered years, the United States Congress recommences numbering from 1, though for bills the House has an order reserving the first 20 bill numbers and the Senate has similar measures for the first 10 bills. Joint resolutions also have the same effect as bills, and are titled as "H. J. Res." or "S. J. Res." depending on whether they originated in the House or Senate, respectively. This means that two different bills can have the same number. Each two-year span is called a congress, tracking the terms of Representatives elected in the nationwide biennial House of Representatives elections, and each congress is divided into year-long periods called sessions.[8]

In the United Kingdom, for example, the Coroners and Justice Act in 2009 started as Bill 9 in the House of Commons. Then it became Bill 72 on consideration by the Committee, after that it became House of Lords Bill 33. Then it became House of Lords Bill 77, returned to the House of Commons as Bill 160 before finally being passed as Act no. 29.[9][10] Parliament recommences numbering from one at the beginning of each session. This means that two different bills may have the same number. Sessions of parliament usually last a year. They begin with the State Opening of Parliament, and end with Prorogation.