From Infogalactic: the planetary knowledge core
Jump to: navigation, search
For the short story, see The Boarding House. For the film, see Boardinghouse (film). 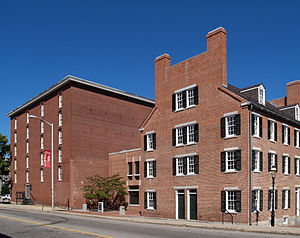 One of the last remaining textile mill boarding houses in Lowell, Massachusetts, on right; part of the Lowell National Historical Park

A boarding house is a house (frequently a family home) in which lodgers rent one or more rooms for one or more nights, and sometimes for extended periods of weeks, months, and years. The common parts of the house are maintained, and some services, such as laundry and cleaning, may be supplied. They normally provide "room and board," that is, at least some meals as well as accommodation. A "lodging house," also known in the United States as a "rooming house," may or may not offer meals. Lodgers legally only obtain a licence to use their rooms, and not exclusive possession, so the landlord retains the right of access.[1] 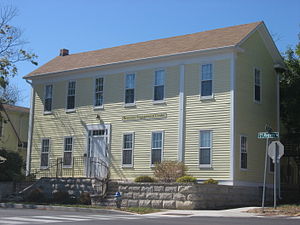 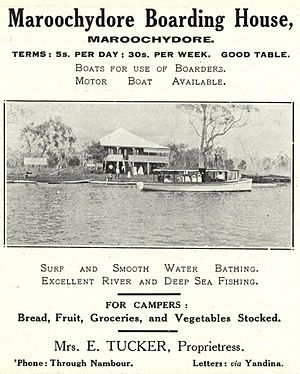 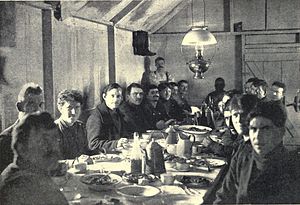 Dinner in a miners' boarding house in northern Canada

Formerly boarders would typically share washing, breakfast and dining facilities; in recent years it has become common for each room to have its own washing and toilet facilities. Such boarding houses were often found in English seaside towns (for tourists) and college towns (for students). It was common for there to be one or two elderly long-term residents.

Boarders can often arrange to stay bed-and-breakfast (bed and breakfast only), half-board (bed, breakfast and dinner only) or full-board (bed, breakfast, lunch and dinner). Especially for families on holiday with children, boarding (particularly on a full-board basis) was an inexpensive alternative and certainly much cheaper than staying in all but the cheapest hotels. In the United Kingdom, boarding houses were typically run by landladies, some of whom maintained draconian authority in their houses: the residents might not be allowed to remain on the premises during the daytime and could be subject to rigorous rules and regulations, stridently enforced.[2]

Bed and breakfast accommodation (B&B), which exists in many countries in the world (e.g. the UK, the United States, Canada, and Australia), is a specialized form of boarding house in which the guests or boarders normally stay only on a bed-and-breakfast basis, and where long-stay residence is rare.

However some B&B accommodation is made available on a long-term basis to UK local authorities who are legally obliged to house persons and families for whom they have no social housing available.[clarification needed] Some such boarding houses allow large groups with low incomes to share overcrowded rooms, or otherwise exploit people with problems rendering them vulnerable, such as those with irregular immigration status. Such a boarding-house may well cease to be attractive to short-term lodgers, and the residents may remain in unsatisfactory accommodation for long periods. Much old seaside accommodation is so used, since cheap flights have reduced demand for their original seasonal holiday use.

Apart from the worldwide spread of the concept of the B&B, there are equivalents of the British boarding houses elsewhere in the world. For example, in Japan, minshuku are an almost exact equivalent although the normal arrangement would be the equivalent of the English half-board. In Hawaii, where the cost of living is high and incomes barely keep pace,[citation needed] it is common to take in lodgers (who are boarders in English terminology) that share the burden of the overall rent or mortgage payable.

In the Indian subcontinent boarders are also known as paying guests. Paying guests stay in a home and share a room with domestic facilities. Rates are nominal and monthly charges are usually inclusive of food, bed, table and a cupboard. The rent can go higher for a room in an upscale locality with facilities like single occupancy, air conditioning and high-speed wireless internet access.

In the United States, zoning was used by neighborhoods to limit boarding houses.

Sherlock Holmes lived in a boarding house at 221B Baker Street, of which the landlady Mrs. Hudson provided some domestic service.

H. G. Wells satirized boarding houses of the Edwardian era in his novel The Dream (1924).

In the 1946 film It's a Wonderful Life, the main character George Bailey in one scene, sarcastically refers to his parents' home as "The Old Bailey Boarding House". Later, in his alternate-universe vision, he discovers that his widowed mother is actually running a boarding house.

Many of the scenes in the comic strip Bloom County took place at the Bloom Boarding house owned by the family of main character Milo Bloom.

In the movie Tales from the Crypt: Demon Knight, the film takes place in a boarding house. It was once a church until it was turned into a boarding house. Brayker and the residents battle the demons in this place.

Arnold, from the critically acclaimed Nickelodeon television show Hey Arnold!, lives in a boarding house owned by his grandparents.

Sandy Brooks and Nick Snowden the main characters in Snow (2004 film) lived in a boarding house.

In The Vampire Diaries, Stefan and Damon Salvatore live in the old Salvatore Boarding house when they return to Mystic Falls.

In True Grit, the main protagonist, Mattie Ross, stays at the Monarch Boarding House where she is forced to share a bed with Grandma Turner, one of the long-term residents and where a robust communal meal takes place.

Harry Dresden, from the book series The Dresden Files by Jim Butcher lives in the rented basement of a boarding house early on in the series.

The young heroes in Horatio Alger's 19th Century rags-to-riches tales often experience life in boarding houses and single works often depict both unscrupulous and kindly boarding house proprietors as the characters make their way upward (or downward) in the world.