From Infogalactic: the planetary knowledge core
Jump to: navigation, search
For the song, see The Bonnie Blue Flag. 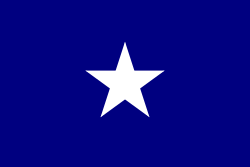 The Bonnie Blue Flag was an unofficial banner of the Confederate States of America at the start of the American Civil War in 1861. It consists of a single, five-pointed white star on a blue field. It closely resembles the flag of the short-lived Republic of West Florida of 1810. 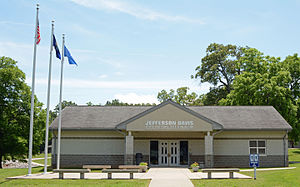 The first recorded use of this flag (though typically with a white star) was in 1810 when it was used to represent the Republic of West Florida, a republic of English speaking inhabitants of southern Alabama, Mississippi, and portions of Louisiana east of the Mississippi River who rebelled against the reign of Spanish government and overthrew Spain’s provincial Governor de Lassus at Baton Rouge. The republic's independence lasted barely three months, dissolved after the annexation of Louisiana’s portion of the disputed land to the United States territory, acquired in the Louisiana Purchase.

Later referred to as the Burnet Flag, it was adopted by the Congress of the Republic of Texas on December 10, 1836. It consisted of an azure background with a large golden star, inspired by the 1810 flag of the Republic of West Florida.[1] Variants of the Burnet Flag with a white star, virtually identical to the Bonnie Blue Flag, were also common. Other variants featured the star (of either color) upside down, and/or ringed with the word TEXAS, with each letter filling one of the gaps of the star.

When the state of Mississippi seceded from the Union in January 1861, a flag bearing a single white star on a blue field was flown from the capitol dome.[2] Harry Macarthy helped popularize this flag as a symbol of independence, writing the popular song "The Bonnie Blue Flag" early in 1861. Some seceding southern states incorporated the motif of a white star on a blue field into new state flags.[3]

The "Bonnie Blue Flag" was used as an unofficial flag during the early months of 1861. It was flying above the Confederate batteries that first opened fire on Fort Sumter, beginning the Civil War. In addition, many military units had their own regimental flags they would carry into battle.

In 2007, one of six known Bonnie Blue flags from the Civil War era was sold at auction for $47,800. The flag had been carried by the Confederate 3rd Texas Cavalry and later exhibited as part of the 1936 Texas Centennial Exposition.[7]

In the 1936 novel by Margaret Mitchell and the 1939 film Gone with the Wind, Rhett Butler nicknames his newborn daughter "Bonnie Blue Butler" after Melanie Wilkes remarks that her eyes will be "as blue as the bonnie blue flag."[8][9]