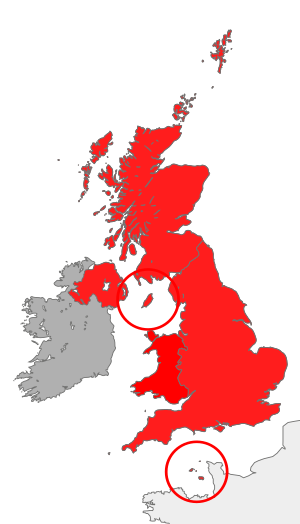 A map showing the areas referred to as the British Islands shaded red.

British Islands is a term within the law of the United Kingdom which since 1889 has referred collectively to the following four polities:

The Isle of Man and the two Bailiwicks are Crown dependencies and are not a part of the United Kingdom. The Parliament of the United Kingdom on occasions introduces legislation that is extended to the islands, normally by the use of Orders in Council. For this reason it has been found useful to have a collective term for the combined territories. Dating back to 1889, a statutory definition can be found in the Interpretation Act 1978.[1][2][3]

The term United Kingdom and Islands is used in the Immigration Act 1971.[4][5]

Section 5 of the Interpretation Act 1978 provides that "in any Act, unless the contrary intention appears" the expression "British Islands" is to be construed according to Schedule 1 of that Act, which contains the following paragraph:

"British Islands" means the United Kingdom, the Channel Islands and the Isle of Man.

Subject to paragraph 4(2) of Schedule 2, that paragraph of Schedule 1 applies, so far as applicable, to Acts passed after the year 1889.[7]

The definition of "British Islands", in its application to Acts passed after the establishment of the Irish Free State but before the commencement of this Act, includes the Republic of Ireland.

The Irish Free State was established on 6 December 1922 and the Interpretation Act 1978 came into force on 1 January 1979.